Parents helping each other find infant formula during shortage 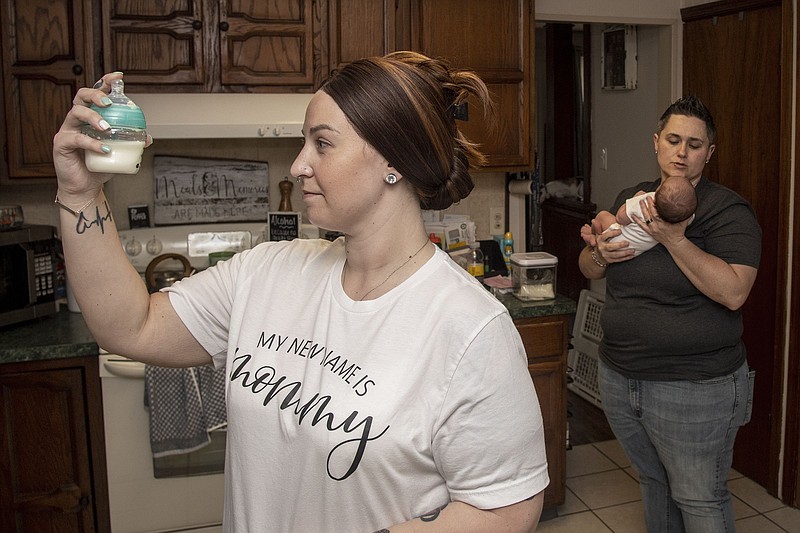 Ashley Brown (front) and Kristen Bradwell prepare infant formula for their month-old daughter, Amelia, in their home in Brookhaven, Pa. Monday, May 16, 2022. Amelia is exclusively formula-fed, and to make sure they had enough, Ashley had to order a case through a seller on Facebook. (Jose F. Moreno/The Philadelphia Inquirer/TNS)

PHILADELPHIA -- Karah Weiser was about to trudge on to yet another store in search of the specialty hypoallergenic baby formula her 4-month-old needs. But first she paused, took another look at the half-empty store display, and snapped a picture.

"Boothwyn Walmart," the 32-year-old Drexel Hill mother wrote alongside the photo she uploaded to a Facebook group she created to help caregivers track down infant formula.

A nationwide infant formula shortage has made families into scavengers, searching the internet and driving miles in search of a can of the powder or concentrate liquid to feed their child one more day. Whether by choice or necessity, families that use formula often feel isolated and ostracized for not feeding their baby breast milk, and the shortage has added exponentially to that guilt and stress. Still, Philadelphia-area families have been banding together to help each other get the food -- and support -- they need.

Facebook groups like Weiser's Delco Formula Finders are flooded with pictures of store shelves with dates and addresses, while other parenting groups have become informal marketplaces to buy, sell, trade or donate unopened formula. Philadelphia lactation consultants are setting up donation boxes at libraries and shuttling supplies between clients' homes. And lactating mothers who don't use formula are packaging up their excess breast milk to donate.

"Ever since I started looking for formula, it's really shocking how much there isn't," said Weiser, her voice beginning to crack. For all the wild emotions, sleeplessness and stress that always come with a newborn, the thought of her baby or anyone else's baby going without formula still demands action. "I think it's great people are looking out for each other," she said.

Last Monday, the U.S. Food and Drug Administration said it had reached a deal with formula giant Abbott, to reopen the manufacturing plant that has been closed since February, when several infants who consumed formula made there became ill and two died. Still, Abbott said it will be several weeks before new formula hits store shelves.

Families that can afford to pay whatever it costs to get the formula they need have found success in online retailers and buy/sell/trade Facebook groups. Though, as Ashley Brown found out, these formula cans are often marked up.

Brown, 29, of Brookhaven, in Delaware County, had decided to formula-feed her baby before she was born, but didn't want to stock up until she knew what type her baby would prefer -- especially if it was a type another family needed immediately.

But when Amelia was born in April the shortage had gotten worse. Combing through a Facebook group for people buying and selling formula, Brown found a woman in Ohio selling six cans of the Costco-brand formula she needed for $200 -- $60 more than it would have cost in the store, if she'd been able to get it there.

Brown said she's grateful such groups have cropped up and said most people she's met through them have good intentions. She does worry, though, that people who want to make a profit off desperate parents will make the shortage worse by buying up what little supply is available in stores.

"When I walk into Walmart, Target and the grocery stores and see the shelves empty, it breaks my heart," she said. "It is so scary not being able to buy formula."

When she can't find formula in stores, she has turned to baby pantries in her area. She tries to bring other donations in exchange for a can of the formula she needs.

The shortage has been hardest on families that can't afford marked-up prices, don't have time to scour the stores or cruise the internet, and don't have the cash to stock up even if they find what they need, said Veronica Briggs-Francis, a certified lactation consultant and owner of Balance Lactation in Philadelphia.

"That was me," Briggs-Francis recalled. She struggled to breastfeed her baby (who is now 13 years old) and when she called the hospital for help, they suggested formula.

"The stress and financial hardship -- I can't imagine going through that now, not even being able to find the formula."

Briggs-Francis is among the medical professionals who worry these families will resort to dangerous work-arounds -- such as diluting formula, which can cause seizures and other emergency medical problems.

Dietitians are urging families in dire need of formula to contact their pediatrician, try a generic brand or consider a milk bank, where donated breast milk is pasteurized for donation. Even in tough times, buying from individuals online or accepting formula from someone you don't know can be dangerous, said Jessica Libove, a lactation program manager at Philadelphia Department of Health's division of maternal, child and family health.

If you are going to acquire formula from unofficial retailers or individuals, Libove said, make sure the formula is unopened, unexpired and not subject to the Abbott recall, which you can confirm by looking up the lot number on Abbott's website. When possible buy from someone you know or who lives locally and can meet in person for pickup, she said. Neighborhood formula exchanges are one way for families help each other safely, Libove said.

That's the kind of connection Briggs-Francis is helping families make. She and another Philadelphia group, Magpi Midwifery, paired up to play matchmaker between their clients. They track which families need formula, which can use breast milk, which have formula or milk they can donate or trade. Often, Briggs-Francis handles the pickup and drop-off herself.

Official milk banks, such as those run through hospitals or the Human Milk Banking Association of North America (HMBANA), require donors to complete health screening and, sometimes, drug testing to be sure their milk is safe. Donations are pasteurized and sterilized before being distributed. But these organizations are typically designed to help medically fragile babies who are in the greatest need, Briggs-Francis said.

Informal milk exchanges, like she's coordinated, can be a resource for families whose babies can tolerate breast milk -- if they can get it. Briggs-Francis recommends working with a lactation consultant or pediatric dietitian, who can help coordinate exchanges between families they work with.

Through Briggs-Francis, Kylie Bigler has donated 700 ounces of breast milk to five Philadelphia-area families since her daughter was born almost a year ago. Bigler, 31, started donating before the shortage, when her supply became more than her child needed.

Now 11 months old, Bigler's daughter will be transitioning away from breast milk soon. But Bigler is considering keeping up her supply anyway, to help families who need it.

Pumping is physically and emotionally draining, but she wants to support other parents and caregivers who -- like her -- are doing their best to provide for their children.

"Motherhood can be so isolating and so challenging, and something as easy as feeding your baby shouldn't be a stressor," Bigler said.

Breastfeeding wasn't an option for Weiser, whose son's allergies make him intolerant of breast milk. So far, she's never completely run out of formula, but the thought that it could happen is terrifying.

The community she's help build has lightened the load, just a little. Within three days Delco Formula Finders amassed close to 300 members. Some follow Weiser's example, posting photos of store shelves, to alert others what brands are available at various stores.

Others post desperate pleas for the brand they are looking for. Within minutes of a new mom asking people to be on the lookout for her daughter's Enfamil formula, four others had posted leads on where it was in stock. One even offered to give her a couple cans, free.