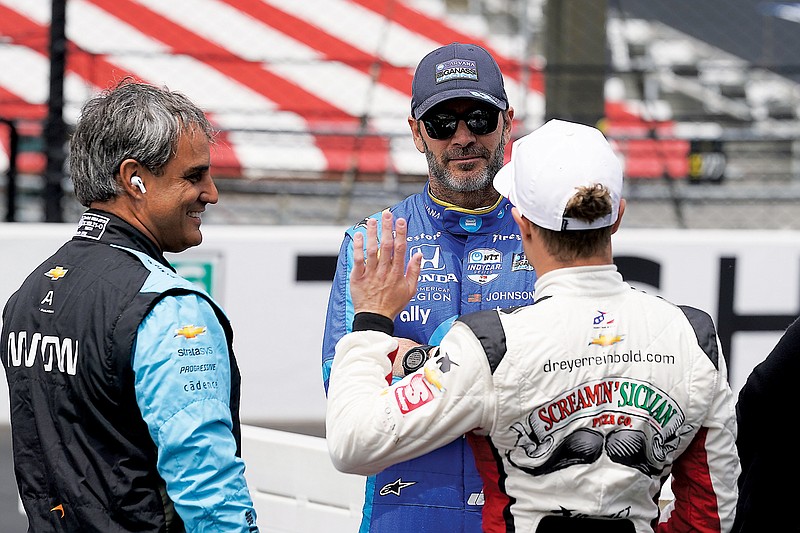 INDIANAPOLIS -- The speeds have been insane -- 234 mph for Scott Dixon in a record-breaking run for the pole -- and Jimmie Johnson and Romain Grosjean are both part of the fastest field in the history of the Indianapolis 500.

Some 20 drivers, maybe more, are legitimate contenders to win Sunday in front of a crowd expected to swell past 300,000. Roger Penske can finally fully open the gates at Indianapolis Motor Speedway for the first time since he purchased the iconic venue just weeks before the start of the pandemic.

After years of trying to establish itself as one of the top series in motorsports, IndyCar is having its moment and “The Greatest Spectacle in Racing” just might live up to its name.

“I think IndyCar is the most competitive open-wheel series in the world,” said Will Power, the Australian who won the Indy 500 in 2018. “It’s more competitive than Formula One is, it just is, and you don’t have to take my word for it.

“Just look at the math: six-tenths (of a second) covers 23 cars in practice. Six-tenths covers how many cars in Formula One? One or two cars? That’s no joke.”

When Power references the close competition across the entire grid, he’s not talking about a recent phenomenon. A series born during a bitter war among the controlling parties in American open-wheel racing led to the 1996 creation of IndyCar -- then called the Indy Racing League -- and its rag-tag bunch of fledgling racers.

Buzz Calkins and Scott Sharp shared the first championship after the inaugural three-race season, and Tony Stewart won the 1997 title before he began his migration to NASCAR. The IRL was up and running but CART was still king -- CART was once far bigger than NASCAR or any other North American motorsports series -- and Penske and Chip Ganassi and all the other big guns shunned Tony George and his weird little series.

George, however owned Indianapolis Motor Speedway and the Indianapolis 500, and when he created the IRL out of frustration with CART, it fractured open-wheel racing in America. The big teams boycotted Indianapolis -- CART raced head-to-head with the Indy 500 in 1996 at Michigan, Jimmy Vasser won and asked “Who needs milk?” in victory lane -- and didn’t start their slow return for almost five years.

Penske didn’t return to Indy until 2001 and last week he said that is the biggest regret of his racing career.

George prevailed because he owned the crown jewel speedway located at 16th Street and Georgetown Road in Indianapolis. In 2008, CART, rebranded as Champ Car, finally merged with the IRL to create IndyCar. But the damage was done: The series had been lapped by NASCAR in prestige and IndyCar has been clawing its way back to relevance ever since.

Under Penske, who agreed in late 2019 to buy both the series and the speedway from George’s family, the series is taking its biggest leaps yet.

“I don’t think there’s any doubt about it that there’s been only upward growth and trajectory,” said two-time IndyCar champion and Team Penske driver Josef Newgarden. “I really feel the momentum picking up the last two, three years, and we have some of the best custodians looking after the series and the speedway in Roger and Penske Entertainment.”

IndyCar speeds into the Indy 500 with four different winners through its first five races. When Dixon on Sunday blazed to a four-lap qualifying average of 234.046 mph, it broke Scott Brayton’s record from 1996 as the fastest pole-winning run in track history. It also made Dixon the sixth pole winner in six races.

The 33-driver field is the fastest in race history with an average speed of 231.023 mph, and the starting lineup includes eight former winners with 13 combined victories.

Johnson, the seven-time NASCAR champion, and former F1 driver Grosjean are among six rookies in the field, the most since 2019. The group includes 20-year-old David Malukas, who wasn’t even born when 47-year-old Tony Kanaan made his first Indy 500 start.

Defending race winner Helio Castroneves is the most experienced driver with 21 previous starts and he will be trying for a record fifth Indy 500 victory.

“The competition has always been crazy, it really just speaks for itself,” said Dixon, a six-time IndyCar champion. “If they can get it in front of people, then it’s a home run. But they need to spend some money.”

Scott McLaughlin, who left V8 Supercars in Australia to move to North Carolina and be an IndyCar driver, called the series “the purest in the world.” He said the comraderie is unlike anything he’s seen since childhood go-karting, and the personalities in the paddock are among the biggest and best in sports.

“I come from a series that was full of backstabbing, and I just love how pure it is,” McLaughlin said. “You can have a blowup on the racetrack, but I feel like you can all have a beer together after. We just all have a ball because it is so pure, there’s no B.S., there’s no crap, and if you’ve got drama you say it to each other’s face.”

Should the Indy 500 be half as exciting as the buildup has been, IndyCar might just take another big step in relevancy.

“We have to just be IndyCar because being IndyCar is enough,” Newgarden said. “When you look at what our product is, who we are, that sells itself. It is racers coming together to simply race.”