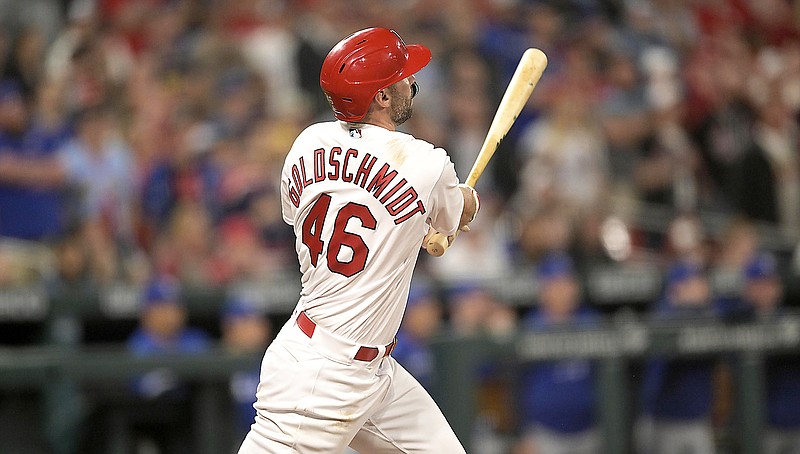 Paul Goldschmidt of the Cardinals hits a winning walk-off grand slam in the bottom of the 10th inning in Monday night’s game against the Blue Jays at Busch Stadium. (Associated Press)

“I was just trying to make sure I could put something in play,” Goldschmidt said. “I was able to get enough of it to get it out of there.”

Goldschmidt, who sat out Sunday, struck out three times and hit into a double play in his previous four at-bats.

“You don’t have any other choice,” Goldschmidt said. “I had five outs in four at-bats. That’s not what you want to do. I was preparing for the at-bat. It was pretty cool.”

“To start the game the way he did and then to stay locked in enough to take that at-bat and win that game is impressive,” St. Louis manager Oliver Marmol said. “What’s cool about today is he strikes out several times and he’s still in the dugout upbeat, smiling and having fun. That’s a player that’s confident in what he’s able to do. That was fun to watch today.”

Not so much, though, for Toronto.

“They’re human beings,” Blues Jays manger Charlie Montoyo said. “They’re going to feel it. Every game is close. I believe in my guys. I know they’re going to get hot. We’re just not swinging the bats right now. We had a chance. We just didn’t come up with the big hits again.”

It was the first walkoff grand slam in St. Louis since April 27, 2017, when Matt Carpenter hit one against Toronto.

Genesis Cabrera (2-1) was the fifth St. Louis pitcher and pitched the 10th inning to pick up the victory as the Cardinals won their fourth straight overall and improved to 1-1 in extra innings.

George Springer homered for Toronto, which fell to 1-2 in extra-inning games.

Each team scored twice in the seventh to chase the starting pitchers.

Miles Mikolas pitched 6⅔ innings before giving way to rookie reliever Andrew Pallante, who came in to a bases-loaded situation. Mikolas filled the bases on a single and a walk before hitting a batter. Pallante walked Springer and Santiago Espinal, giving Toronto a 3-1 lead before getting out of the jam.

Rookie Juan Yepez hit his fourth home run with one out in the seventh off Jose Berrios, who then gave up two singles.

“We love this sport,” Berrios said. “We’ll keep grinding. We’ll keep pushing. It’s tough when we lose, but that’s part of the game. We know we can play better out there. We’ll keep trying and working as a team.”

Adam Cinder relieved and allowed a run-scoring single by Harrison Bader before getting a double play.

The Blues Jays tied it at 1 when Springer led off the sixth with a homer to left.

The Cardinals struck for a run in the second on a one-out run-scoring double by rookie Brendan Donovan. Nolan Arenado led off the inning with a single.

Notes: Toronto 2B Santiago Espinal singled in the first inning, giving him a 16-game hitting streak. It’s the longest active streak in MLB. … Blue Jays RHP Julian Merryweather was recalled from Triple-A Buffalo, while C Zack Collins was optioned to the club. … Cardinals C Yadier Molina was placed on the bereavement list. Molina’s son injured his arm playing baseball in Puerto Rico and will have surgery this morning. … Rookie C Iván Herrera was recalled from Triple-A Memphis. Herrera was batting .310 with two home runs and 13 RBI in 20 games at Memphis. RHP Angel Rondon was optioned to Memphis. RHP Junior Fernandez was promoted Monday afternoon from Memphis to help in the bullpen. … Cardinals rookie LHP Matthew Liberatore was recalled from Memphis, as was Nootbaar. … Blue Jays LHP Tim Mayza (left forearm inflammation) did not make the Blue Jays’ road trip to St. Louis. … Toronto LHP Tayler Saucedo (right hip discomfort) continues working through a throwing program, adding distance to his throws each day. … Cardinals LHP Steven Matz (left shoulder impingement) was placed on 15-day injured list. Matz was removed from Sunday’s start after just four pitches. … Cardinals OF Dylan Carlson (left hamstring strain) went on the 10-day injured list (retroactive to May 22). Carlson left Saturday’s game after two innings in the field. … Blue Jays RHP Kevin Gausman (3-3, 2.52) faced St. Louis once last year when he was with San Francisco. In seven career appearances, including three starts against St. Louis, Gausman is 0-3 with a 3.97 ERA. Cardinals RHP Jordan Hicks (1-3, 4.21) will be making his first career appearance and start against the Blue Jays. It will be his first career start against an interleague opponent and his first career appearance against an A.L. East team.