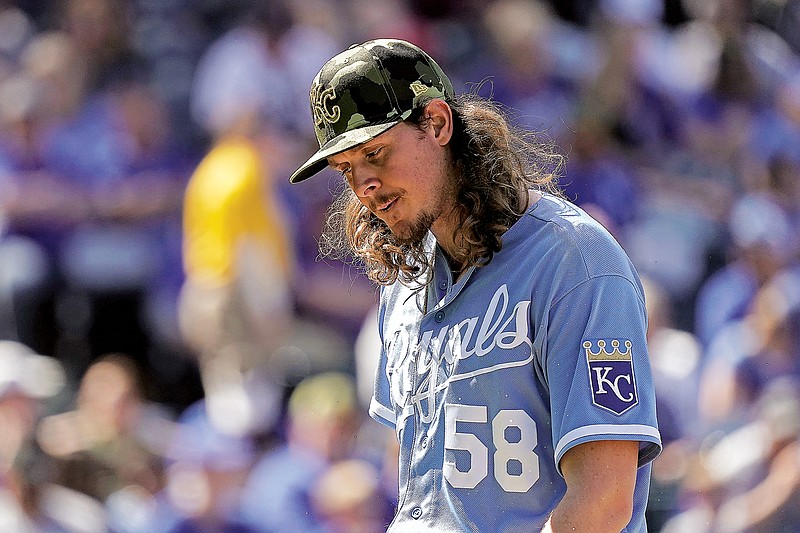 Royals relief pitcher Scott Barlow walks to the dugout after being taken out in the eighth inning of Sunday afternoon’s game against the Twins at Kauffman Stadium in Kansas City. (Associated Press)

KANSAS CITY -- Gio Urshela hit a tiebreaking single in the ninth inning to complete Minnesota’s comeback from a six-run deficit Sunday afternoon, lifting the Twins past the Kansas City Royals 7-6.

“That win was pretty special,” manager Rocco Baldelli said. “It was special in the way it came together, the number of contributors.”

Down 6-0, the Twins scored five times in the eighth, capped by Kyle Garlick’s two-run homer.

Jorge Polanco drew a leadoff walk from Josh Staumont (1-1) in the ninth, Max Kepler doubled and Gary Sanchez tied it with his second sacrifice fly in two innings. With two outs, Urshela singled for the lead.

“It was great last two innings as a team we were taking good at-bats which is very important for us,” Urshela said. “There was good energy in the dugout going into the ninth and we were able to fight back.”

Reliever Tyler Duffey (2-2) got the win and Jhoan Duran pitched a scoreless ninth for his third save.

Twins starter Bailey Ober tossed five innings and allowed one run and three hits with four strikeouts and a walk.

“The guys in the back have been so good all season picking each other up,” Royals’ manager Mike Matheny said. “It was unfortunate today because they have been good for us, but that one stings.”

Carlos Santana hit a three-run double in a five-run sixth for the Royals. Andrew Benintendi had three hits and finished the series 7-for-11.

Notes: Twins OF Trevor Larnach was reinstated from the 10-day injured list after missing 13 games with a right adductor strain. … The Royals recalled Singer from Triple-A Omaha and reinstated RHP Ronald Bolanos. Kansas City optioned RHP Dylan Coleman and LHP Foster Griffin to Triple-A in the corresponding moves. … Twins RHP Cody Stashak (right shoulder impingement) was placed on the 15-day IL. LHP Danny Coulombe was sent to Double-A Wichita for a rehab assignment. … The Twins will continue a stretch of 15 straight A.L. Central matchups with a home contest with Detroit. Chris Archer (0-1, 4.10) will start for the Twins. … Royals RHP Zack Greinke (0-2, 3.48) will open a two-game series tonight in Arizona for the Royals.