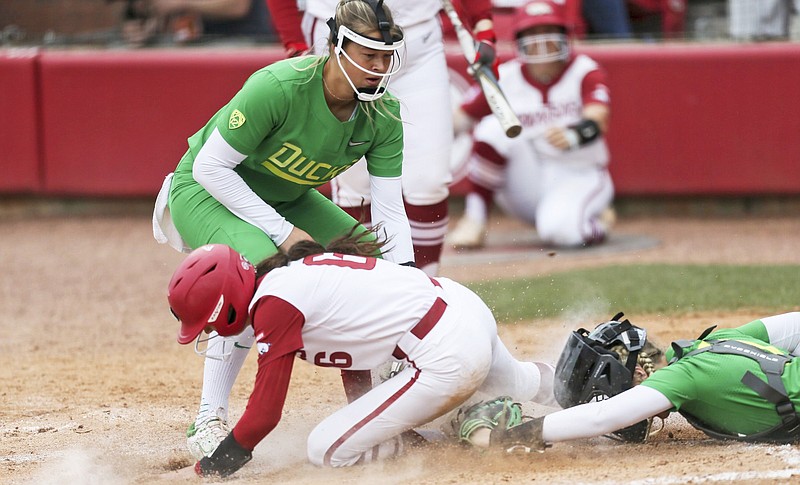 Cally Kildow of Arkansas slides home for a run between Oregon pitcher Makenna Kliethermes and catcher Terra McGowan during the sixth inning of Sunday's championship game of the Fayetteville Regional Softball Tournament at Bogle Park in Fayetteville. (NWA Democrat-Gazette/Charlie Kaijo)

FAYETTEVILLE, Ark. — Oregon junior Makenna Kliethermes pitched in all four games for the Ducks in the NCAA Regionals, finishing with a 2-2 record.

Kliethermes walked one and struck out one in 2⅓ innings Friday and added three strikeouts Saturday in 3⅓ innings against Wichita State, not allowing a run in either contest.

In Saturday’s 6-2 loss to Arkansas — the No. 4 overall seed in the NCAA Tournament — Kliethermes struck out seven and walked three batters in five innings as the starter.

In Sunday’s 9-3 loss to the Razorbacks in the regional championship game, Kliethermes threw 4⅔ innings of relief, walking three and striking out two.

Oregon finished the season with a 33-19 record.