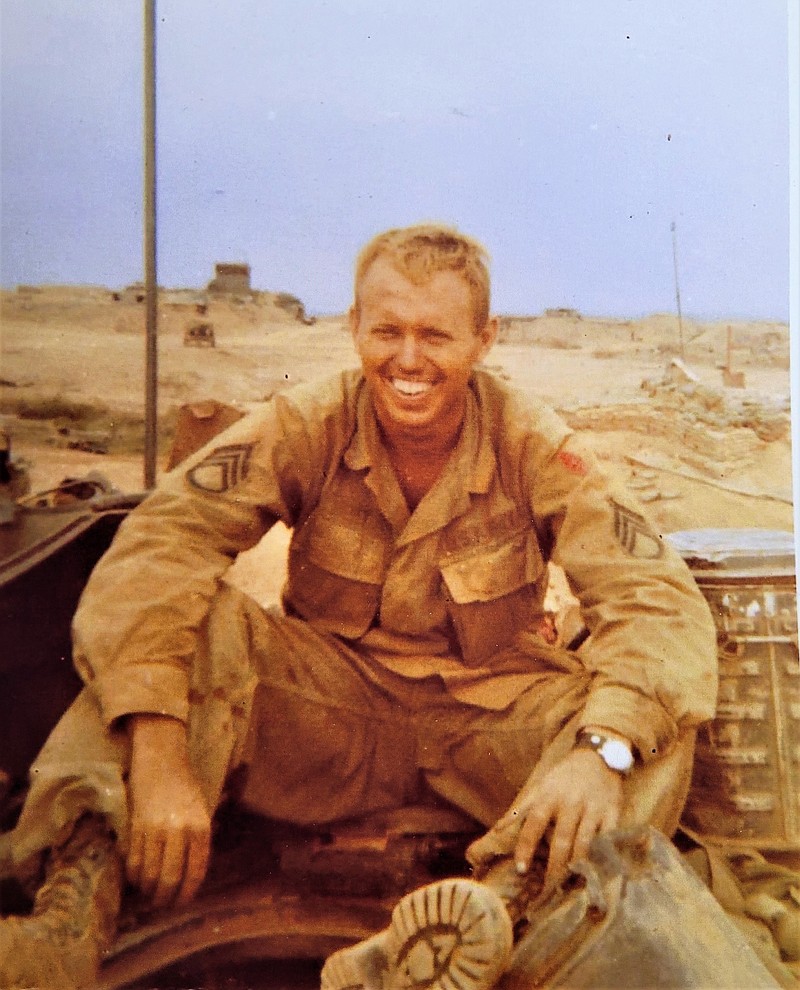 Wesley "Wes" Scott is pictured sitting on his tank at Firebase A-4 at Con Tien, Vietnam. (Courtesy/Wes Scott)

As a young man who had recently graduated from college, Wesley "Wes" Scott was a little surprised when he was drafted into the U.S. Army and deployed overseas during the Vietnam War.

It was an experience he described as having its hardships, but despite there being "a few bad days," it provided him with a greater appreciation for how good his life has become.

Born in early 1945 in San Luis Obispo, California, Scott's parents were living on the West Coast because of his father's service in the U.S. Navy during World War II. After his father was discharged, the family eventually settled in his mother's home community of Jefferson City.

"I graduated from Jefferson City Senior High in 1963 and enrolled in the Missouri School of Mines at Rolla to pursue a degree in engineering," Scott said. "I enjoyed mechanical engineering, but I think I liked being a mechanic more."

Earning a bachelor's degree in mechanical engineering in 1968, he was hired by Schlumberger, an oilfield services company operating at Fort Smith, Arkansas. After beginning work there, he was advised the company had never lost an employee to the draft.

"After only a few months of working there as an engineer, I received a notice from the draft board, and the company wrote a letter to them explaining the critical nature of our work," Scott said. "The board responded with a letter stating I was to report for active duty on Dec. 8, 1968."

Smiling, he added, "Either the company lied to me or I was the first company employee to be drafted."

When finishing bootcamp at Fort Leonard Wood, Scott was given the choice of several military engineering jobs because of his civilian education; however, when he received his orders for further training, it was for Fort Knox, Kentucky, to train with tanks.

The advanced training introduced him to all aspects of M-48 Patton tanks, which were gas-powered and armed with a 90mm main gun. For several weeks, he learned how to drive, fire and maintain the heavily-armored piece of military equipment.

"I didn't realize at the time that they were pushing NCO schools because they were losing tank commanders in Vietnam," he added.

He remained at Fort Knox for the NCO school, completing navigational training, learning to fire many types of military weapons and receiving an abridged introduction to serving as a leader in the U.S. Army.

From there, he traveled to Fort Riley, Kansas, spending several weeks engaged in assorted maneuvers and training exercises using tanks. Then, in January 1970, came orders for a combat deployment and he reported to Quang Tri, Vietnam, receiving assignment to 1/77th Armor under the 5th Mechanized Infantry.

"I became a tank commander in 3rd Platoon of C Company," he said. "Our primary responsibilities consisted of patrols along the DMZ and guarding Firebase A-4 at Con Tien at night. We were always north of Quang Tri, and the strip we patrolled was six to eight miles wide, and no civilians were allowed inside it."

Many of the 52-ton M-48 tanks they used were old and worn, but Scott and his fellow tankers worked hard to keep them operational. For the first three months, their 90mm main guns, along with the .50 caliber machine guns mounted on the top turret, did a good job of protecting the soldiers of the platoon.

Unfortunately, in April 1970, an RPG pierced the turret of one of the platoon's tanks, killing two soldiers inside.

"Another bad situation occurred on May 5, 1970," he said. "We departed the firebase with four tanks to support an infantry company on patrol near the DMZ. While en route, a personnel carrier threw a track and the platoon sergeant had my tank stay with them for protection while they made repairs."

The other three tanks continued moving forward in support of the infantry troops and soon encountered concentrated enemy opposition.

"Rounds were flying above us and the enemy jammed our communications," he recalled. "When it finally ended, I found out that two of the tank commanders -- including my platoon sergeant -- had been killed and the other was medically evacuated. If I had not been left to guard the personnel carrier, it is likely that I and my crew would have been killed as well."

The combat losses resulted in Scott being appointed platoon sergeant. While overseas, he was able to enjoy a brief leave to Hong Kong and then received an "early-out" release from the U.S. Army so he could return to Missouri and attend graduate classes at the University of Missouri.

The veteran met Betty Foster through a friend, and the couple married in 1971, later becoming parents to a son and a daughter. Scott was employed as a mechanical engineer in state government, completing 30 years of full-time and nine years of part-time employment prior to his retirement in 2009.

Since that time, he has found enjoyment though restoration of classic automobiles on his farm near Eugene.

"There were a lot of difficult times in Vietnam ... but I have never really had trouble speaking about it," he said. "There was a time when we ran over a mine and a couple of guys were injured, but nothing too serious. And a rocket once blew a bunch of holes in the fender of our tank."

Scott added, "But we worked hard at staying alive and had a little bit of luck on our side, too." 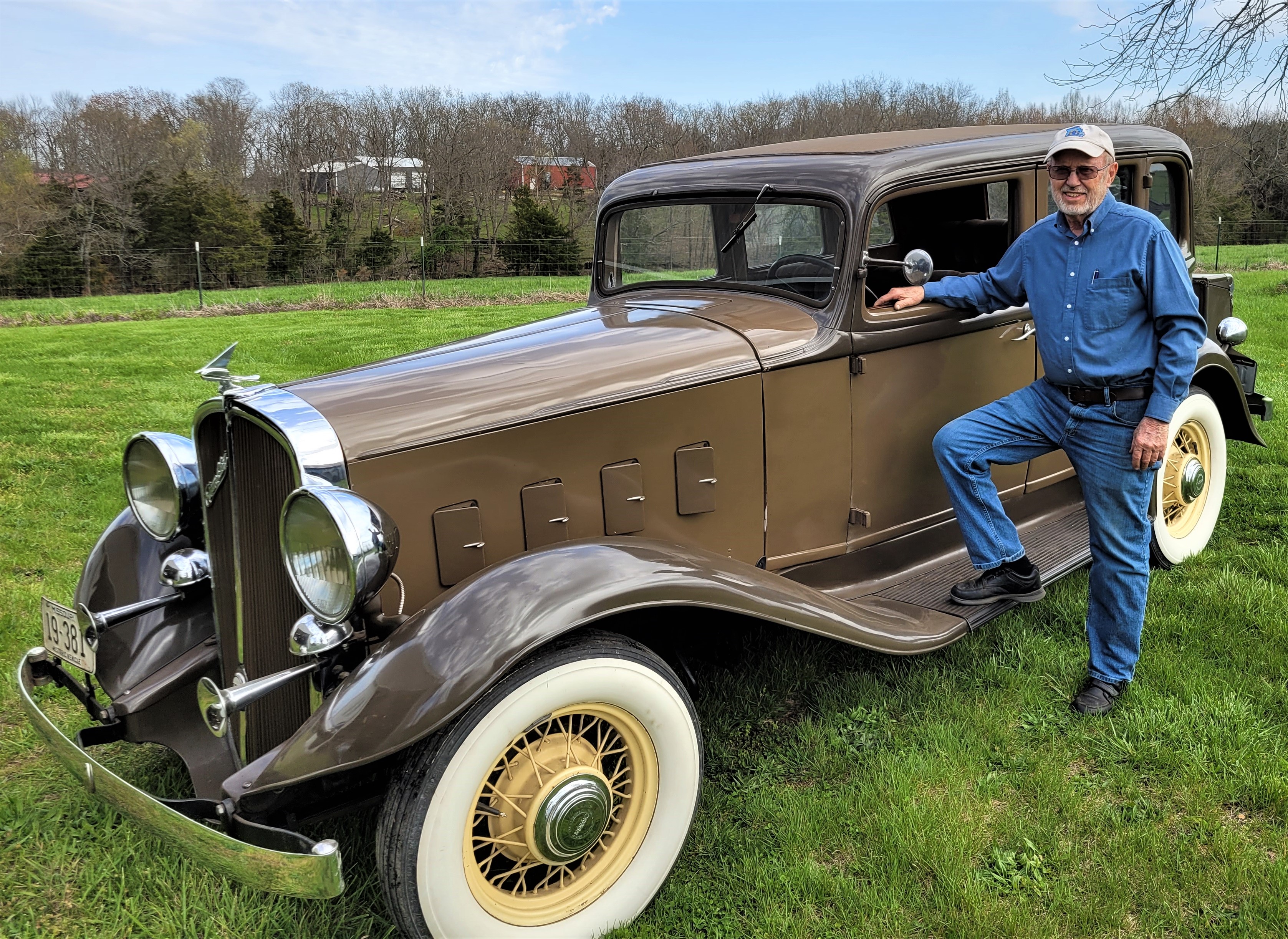 Wes Scott was drafted into the U.S. Army in 1968, several months after graduating from the Missouri School of Mines with his mechanical engineering degree. He went on to train with M-48 Patton tanks and deployed to Vietnam, where he served as a tank commander and platoon sergeant. He is pictured with a 1933 Franklin car he restored. (Courtesy/Jeremy P. Amick)