Speeds up at fastest Indy 500 qualifying since 1996 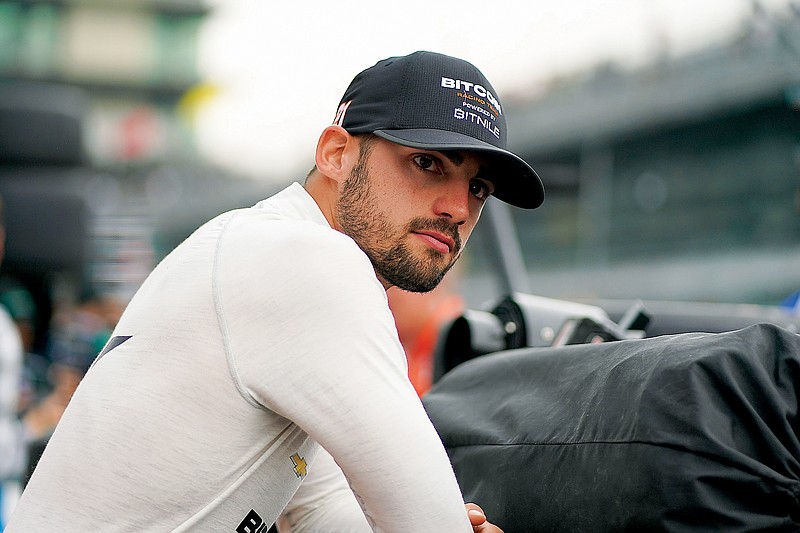 INDIANAPOLIS -- Rain held off long enough Saturday to complete the first round of qualifying for the Indianapolis 500 on a soupy day that still produced eye-popping speeds not seen in 26 years at Indianapolis Motor Speedway.

Rinus VeeKay and Pato O’Ward, a pair of young new stars, posted blistering qualifying averages of more than 233 mph in a flex of Chevrolet horsepower. NASCAR star Jimmie Johnson qualified for his first Indy 500 and his Chip Ganassi Racing team showed it might be the strongest organization at Indy right now.

Meanwhile, Andretti Autosport had a terrible day. And Team Penske got bit by the weather when it pulled Scott McLaughlin’s qualifying time late Saturday afternoon and sent him back out to try to crack the top 12.

McLaughlin was 15th on the board when his time was forfeited; the New Zealander went even slower and dropped to 26th.

“Well this place just kicked (me) in the privates -- ah well,” McLaughlin posted on social media.

Penske teammate Josef Newgarden followed McLaughlin out for his own attempt to make the top 12, but his run was halted when lightning flashed. It was the second lightning stoppage of the day, and the rain followed minutes later. IndyCar called it a day about 70 minutes short of the scheduled completion.

Only spots 13 through 33 were locked in Saturday, and the top 12 return today for a shootout for the pole. The fight for the front row will be VeeKay and O’Ward, who posted the third and fifth fastest four-lap qualifying averages in track history, then Felix Rosenqvist as Chevrolet swept the top three spots.

Ed Carpenter, who Saturday morning posted the eighth-fastest lap in track history at 234.41 mph, was sixth fastest in qualifying as he and Will Power (11th) completed the Chevrolet group.

Honda advanced seven drivers to today as the Ganassi group was joined by Romain Grosjean, the only Andretti driver to make the top 12, and two-time winner Takuma Sato.

Sato had a rollercoaster session; he was disqualified following his first qualifying attempt for interfering with Marco Andretti’s lap. When he made his second attempt, Sato scrubbed the wall and still made it into the top 12.

Spots seven through 12 for the May 29 race will be determined in another qualifying round, then following a break, a “Fast Six” shootout will set the first two rows of the 106th running of the Indy 500.

VeeKay for Ed Carpenter Racing put his Chevrolet atop the scoring pylon with a four-lap average speed of 233.655 mph that bumped O’Ward of Arrow McLaren SP to second at 233.037.

Arie Luyendyk set the four-lap qualifying record in 1996 at 236.986, and VeeKay’s average was third fastest of all time behind Luyendyk and Scott Brayton’s mark of 233.718. O’Ward’s average was fifth fastest in history, with Tony Stewart fourth in 1996.

“It’s very, very cool to have two Dutch guys in the top-five fastest of all time,” said VeeKay, who like Luyendyk is from The Netherlands.

Johnson once again showed incredible speed and in an early Saturday morning practice turned a lap at 233.961 mph -- 14th fastest in track history.

“I think the speed scared my kids,” Johnson said. “When they saw me, the look in their eyes. They’ve been to plenty of races, but they never looked at me like that.”

The seven-time NASCAR champion has steadily become a legitimate contender to win the Indy 500, which would be his fifth victory on the Indianapolis oval; Johnson won four times in NASCAR.

“There were some quiet moments I had before I rolled off, I was able to look around and really take in the moment,” said Johnson, “and what a special moment it was, I am just so happy to here. Things are looking good for now.”

Not long after Johnson’s morning run, teammate Dixon turned the 13th fastest lap in history at 234.093.

Carpenter closed the session as the leader with the fastest lap in Indy 500 practice since Luyendyk set the track record of 237.498 mph in 1996.

Andretti Autosport struggled from the get-go as Marco Andretti had to abort his qualifying run when Sato failed to get off the track following his run moments earlier.

As the team was figuring out what to do about Andretti, Colton Herta’s engine seemed to fail during Herta’s run. Winner on the road course just one week ago, Herta was making his qualifying attempt when his Honda engine suddenly shut off.

He aborted his run and returned to the pits, and later confirmed his engine would be changed.

Then 2016 winner Alexander Rossi had a miserable first run: “We added downforce,” said Rossi, who called the decision “horrible.”

His second attempt was worse and Rossi will start 20th. Devlin DeFrancesco, a rookie, was 24th and Herta will start 25th.

The last row of the Indy 500 will be rookie Christian Lungaard, Jack Harvey and Stefan Wilson, the 33rd entrant.

Wilson had a gearbox issue Saturday with his race car and needed an engine change and never got on track.