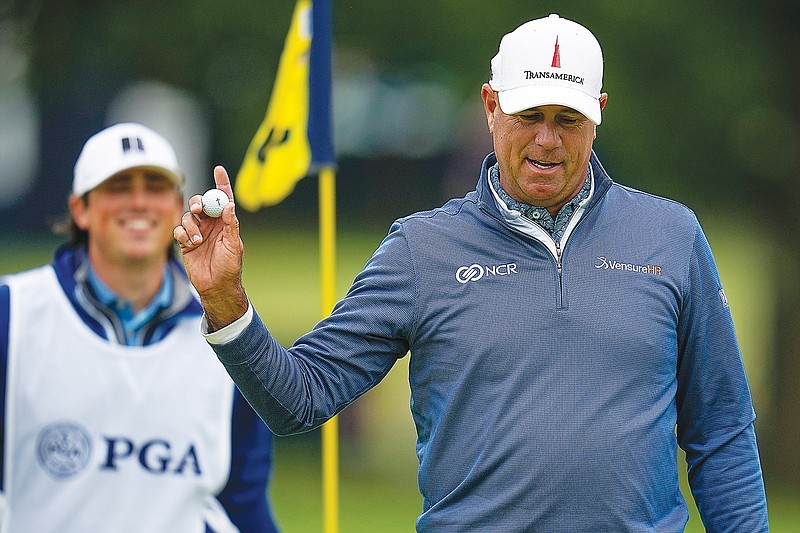 Stewart Cink waves after making a putt on the third hole during Saturday's third round of the PGA Championship at Southern Hills Country Club in Tulsa, Okla. (Associated Press)

TULSA, Okla. -- While some of the world’s best players were flopping around in the soggy, blustery conditions Saturday at Southern Hills, Webb Simpson showed low scores were still possible.

Simpson’s 65 off a morning start was one of the best rounds of the day Saturday, and kept him within sight of the leaders. He might have been near the top if not for a 75 on Friday. Simpson barely survived the cut, then attacked the weekend when the bad weather blew in.

“Typically I want it to be really hot. But you know, I feel like I’ve grown in the area of kind of coming out and not getting too ahead of myself and be patient out there, kind of grind it out,” said Simpson, the 2012 U.S. Open winner. “I think today what I did well was I just kind of adapted to the conditions … Tried not to complain about anything.”

Simpson had two birdies in the first four holes. His eagle on the par-5 13th when he holed a wedge from the fairway was the shot of the morning.

The round left him one stroke outside the top 10 when he was done.

“Today was a test of the mind as well as physically because we have a mist out there all day, clubface is getting a little wet, it’s blowing sideways,” Simpson said. “I surprised myself a bit today. But I’ll take it.”

Jordan Spieth can put plenty of the blame for missing out on the final major in his Grand Slam quest on his putter, which continuously let him down during the first three rounds of the PGA Championship.

He was already 77th of the 79 players in putting before another poor display Saturday. That included a three-putt bogey on the par-3 sixth that ended with Spieth chucking his ball in the water and grasping his putter as if to snap it in half.

Speaking of water, Spieth’s approach to the 12th skipped off the creek and near the green. He still made bogey and shot 74, putting him at 5-over for the tournament.

Stewart Cink took some inspiration from 50-year-old Phil Mickelson’s triumph at last year’s PGA Championship and is in the hunt for the win if a few things break his way.

On his 49th birthday, Cink is in contention at Southern Hills after shooting a 1-over 71. The 2009 British Open winner will start Sunday seven shots behind leader Mito Pereira, who happens to be 22 years his junior.

Mickelson, who withdrew rather than defend his title this week, became the oldest major winner with his victory last year at Kiawah Island. Mickelson surpassed the mark set by Julius Boros, who was 48 when he won the 1968 PGA.

Cink was 48 when he won last year’s Heritage at Harbour Town Golf Links.

“It blows the ceiling off what we thought was impossible before, really,” Cink said of Mickelson’s win last year. “I was inspired by seeing what Phil did and that he hung in there and that he was himself and just made it happen.”

Kramer Hickock made perhaps the most incredible bogey Saturday of the PGA Championship.

After hitting into the greenside bunker at the par-4 12th, Hickock’s shot out of the sand caught the lip and bounced back toward him. The ball hit his shoe, which would have been a penalty before a 2019 rules change, and settled into Hickock’s deep foot print. He proceeded to hammer at it but couldn’t get the next shot out, either.

This time, the ball rolled to the bottom of the trap and gave Hickock a decent lie. And wish his third shot out of the bunker, and his fifth on the hole, Hickock merely holed out for the crowd-pleasing bogey on his way to a round of 75.

Local teaching pro Tracy Phillips got to play in the PGA Championship after all.

When an odd number of players made the cut at Southern Hills, the 56-year-old club pro from nearby Cedar Ridge Country Club was asked to be the playing partner -- the marker, in golf parlance -- for Brian Harman, who was first off the tee.

Phillips was one of the worlds’ best junior players in the late 1970s and early ’80s and went to Oklahoma State with his mind on playing professionally. But his swing went awry and he went almost 20 years without playing before a late-career resurgence that nearly allowed him to qualify for this year’s PGA at the club pro championship.

His round at Southern Hills should be good practice for next week, though. He’s qualified for the Senior PGA Championship, which begins Thursday at Harbor Shores in Benton Harbor, Mich.