Pereira takes three-shot lead into final round at PGA Championship 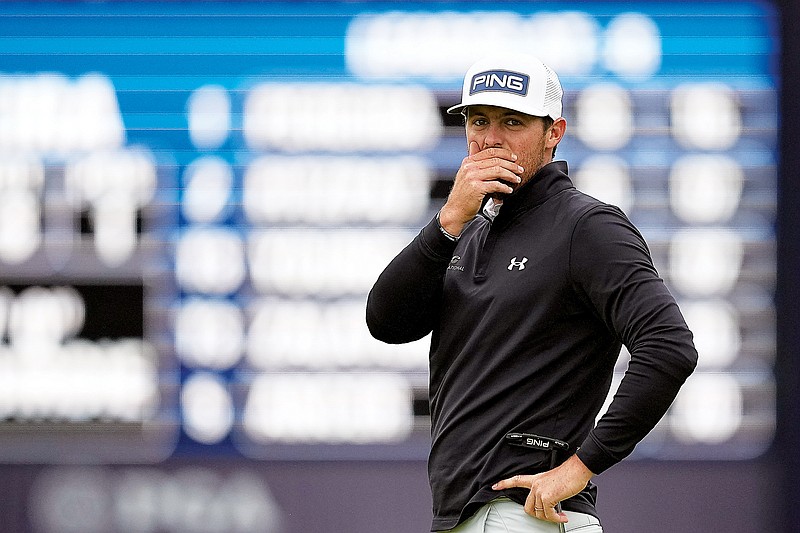 Mito Pereira reacts after missing a putt on the 18th hole during Saturday’s third round of the PGA Championship at Southern Hills Country Club in Tulsa, Okla. (Associated Press)

TULSA, Okla. -- Mito Pereira spent four hours soaring and sliding at Southern Hills in the cold and wind, calling it the biggest round of his life Saturday in the PGA Championship and one that gave him an idea of what to expect today.

Pereira soared to a five-shot lead. He nearly lost it all in six holes. And when a third round as fickle as the wind finally ended, the 27-year-old from Chile stood on the cusp of fame.

He made three birdies during his last six holes, the final hole from just outside 25 feet he called a bonus, giving him a 1-under 69 and a three-shot lead ahead of Matt Fitzpatrick of England and Will Zalatoris.

“It’s by far the biggest tournament I play, the biggest round of golf. And tomorrow is going to be even bigger,” Pereira said. “Just try and keep it simple. Try to do the things I’ve been doing. Try to not even look at the people that’s around me.”

His inspiration for moments like this is Tiger Woods, who won’t be around. Woods, limping badly on his battered right leg from his car crash 15 months ago, withdrew from the final round after posting a 79, his highest score ever in a PGA Championship.

It was his first withdrawal from a major in his pro career, and it was not a big surprise. The pain was more noticeable than it was on the weekend at the Masters, and he was 21 shots behind.

Pereira is at 9-under 201 as he tries to become Chile’s first major champion and the third player from South America.

If he lacks experience -- this is his first PGA and only second major -- so do the players closest to him. None of the top six have ever won a major. The leading four players have yet to win on the PGA Tour, the toughest circuit in golf.

Fitzpatrick birdied his last two holes for a 67 and is the most tested of the bunch with his seven European tour victories and two Ryder Cup teams.

Zalatoris also had a late recovery, though his early damage was significant. Leading by one at the start of the round, confident as ever his game is suited for the toughest tests, Zalatoris dropped four shots in seven holes to fall five behind.

He was helped by Pereira running into trouble, too -- it seemed everyone did -- by making four bogeys in a five-hole stretch around the turn. Zalatoris had a pair of birdies on the back nine for a 73 and was still very much in the mix.

“I was pretty frustrated with the start but I would rather have a frustrating start and good finish. It’s good momentum heading into tomorrow,” Zalatoris said.

Pereira, a PGA Tour rookie, was the Korn Ferry Tour player of the year in 2021. No tour rookie has won a major since Keegan Bradley in the 2011 PGA Championship.

“I was playing really good and suddenly I made four bogeys in five holes. It was a tough place to be at that moment,” he said. “But just found myself from 13 on. Those holes are pretty tough. So really happy how I ended up playing. The birdie on 18 was a bonus.

“Just happy to be in this position.”

There were missed opportunities for so many others on a rough day featuring a wind out of the north that made Southern Hills play entirely different.

Former PGA champion Justin Thomas went 12 holes without a birdie, and then he gave it back with a bogey on the closing hole for a 74. Two-time Masters champion Bubba Watson looked shaky as ever on the greens, making three bogeys during his last four holes for a 73.

They went from the cusp of contention to seven shots behind.

Rory McIlroy had a six-hole stretch around the turn that he played in 6 over -- and that even included a birdie -- for a 74 to fall nine shots back.

Zalatoris will be in the penultimate group with Cameron Young, the son of a PGA professional, who charged into the mix by driving the 296-yard 17th hole and making a 25-foot eagle. He wound up with a 67 and was four shots behind.

Pereira wasn’t immune from a slide. He became the first player to reach 10 under for the championship with a 10-foot birdie putt on the par-5 sixth, and he stretched the lead to five shots when Zalatoris made another bogey.

But then the Chilean took bogey on the par-3 eighth, chunked an approach from the fairway on the ninth and made bogey, had a wedge spin off the front of the green at No. 10 and into the bunker for bogey, and went over the 12th green for a fourth bogey in five holes.

Zalatoris briefly caught him with a 35-foot birdie putt on the par-5 13th. That only lasted as long as it took Pereira who matched birdies from 18 feet, and the Chilean answered with a daring shot over the edge of a bunker to 6 feet for birdie on the par-3 14th.

Only 16 players remained under par at Southern Hills, a list that included Webb Simpson. On Friday, he had to save par from a bunker on his final hole to make the cut on the number. In a tie for 64th at the start of the third round, Simpson shot a 65 and moved into a tie for 10th.

He was eight shots back, seemingly too far to catch Pereira, but so little is known about how he will react to the Sunday pressure of trying to win a major.

This is a big one.