Nursing sisters find solace in each other during pandemic 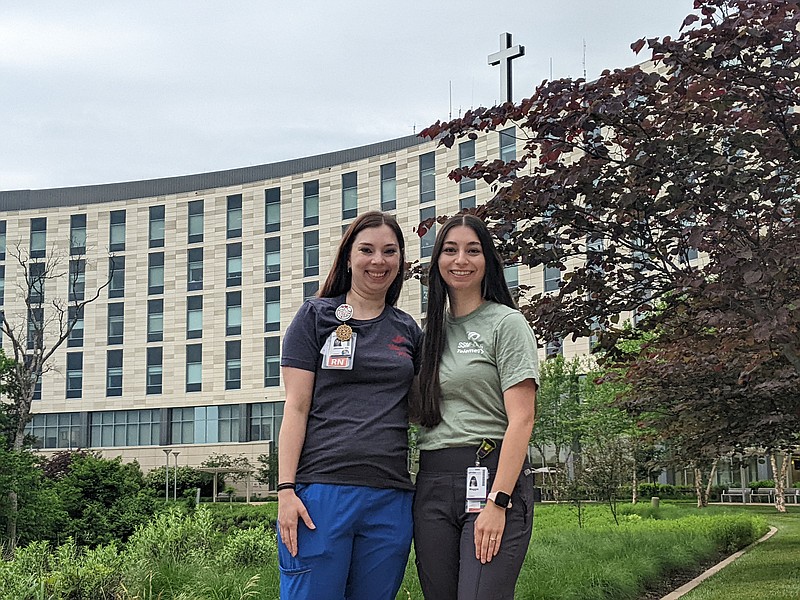 Jenny Akin, a nurse of nine years, and Maggie Morris, a Lincoln University nursing student and patient care technician, are sisters that work together at SSM St. Mary's Hospital in Jefferson City. Morris served alongside her sister as a summer intern during the height of the COVID-19 Delta Variant. (Ryan Pivoney/News Tribune photo)

As a nurse on the front lines of the COVID-19 pandemic, Jenny Akin had a hard time watching her younger sister follow the same path.

"I hate Maggie is getting into nursing at this time," Akin would tell her mom after a shift at the hospital during the height of the COVID-19 pandemic. "This is not a good time."

Akin, who has been a nurse at St. Mary's for nine years, was worried about losing new nurses because no one would step up to the front lines during a global pandemic.

"I don't want her to not love nursing," she said. "But it's hard to love nursing when this is what the atmosphere is like."

Maggie Morris, Akin's younger sister, is preparing to graduate from Lincoln University's School of Nursing in December but is already stepping into the nursing field.

Morris completed a summer internship at St. Mary's during the height of the Delta variant of COVID-19, and while still in school, stays employed by the hospital as a patient care tech. As a tech, Morris collects patient vital signs, answers call lights, provides daily care and helps nurses where needed.

Morris said it was nice to receive recognition from an organization that has played a significant role in her life.

"We were very familiar with the old hospital because our dad got a lot of cancer treatment over there and so he battled his three and half years of cancer over there, and that's kind of where we found such a connection to St. Mary's," Akin said. "And, actually, that's where I decided I wanted to be a nurse."

Akin said she was drawn to the hospital's faith-based mission and kind staff. She began working at St. Mary's on the same floor where her father was treated and with some of the same nurses that cared for him.

Morris, who was 7 when her father was diagnosed and 10 when he died, said the experience sent her down a similar path.

"I felt like the hospital was kind of like a second home," Morris said. "We got so used to it. We could wander the halls, we knew the nurses and everything and so I knew starting then that I wanted to go into healthcare."

Morris said she initially wanted to be a doctor, so she got a biology degree from Westminster College and applied to medical school. A talk with one of the doctors made her aspirations more clear.

"I really don't know why I chose medical school because when I thought back it was all of my dad's nurses that I remember, not his doctors," she said.

She then applied to Lincoln's nursing program. The ability to commute from home and the program's positive reputation sealed the deal, Morris said.

The summer internship at St. Mary's exposed Morris to the challenges of nursing in a global pandemic intensified by a national nurse shortage, a perfect storm that strained hospital staff like her sister.

It was brutal caring for patients without time to connect and talk, Akin said. Patients were sent to the Intensive Care Unit for COVID-19 every day, she said, and sometimes there wasn't an opportunity to say goodbye.

Hospitals restricted visitor access to patients during the pandemic as well, which Akin said made her feel guilty about the lack of personal connection and care she and other nurses were able to provide.

"You felt like you were not neglecting them but not getting them their full care, just because you were kind of in almost a war zone front line," Akin said.

She said there was a sense she wasn't doing what she signed up to do as a nurse and there were days she walked into the hospital not expecting to leave happy.

"I was so grateful to have her there because COVID took a big hit on my mental health," Akin said about her sister. "She's kind of one of my rocks and stuff, too. We're seven years apart, but I can easily say she's my best friend."

However, it was also difficult watching her sister enter the field at one of the worst times in Akin's nearly decade-long career at St. Mary's.

"That's what part of nursing she saw and nursing is way more than COVID, but that's what she saw was the front lines of COVID," Akin said.

Morris said entering the hospital amid the pandemic was overwhelming at times because nurses were seeing more patients than they should have been, but she didn't know any different. She said there simply wasn't enough time in a 12-hour shift to provide the level of care she wanted for each patient.

She also wasn't going to complain when Akin and other veteran nurses were worn out from repeated surges in infections, she said.

"This was my first time actually being able to go into the isolation rooms, take COVID patients and do all the care for them, so I was definitely looking up to my sister, my preceptor Morgan and all the other veteran nurses, just because I would have been a fish out of water if it wasn't for them," Morris said.

Her first experience delving into the nursing field wasn't the typical one, but Morris didn't know until she had what Akin described as a normal day before the pandemic.

Morris texted her sister one morning that she had fewer patients than normal, none had COVID-19 and she had morning vitals taken before 10 a.m. All that was left to do was provide daily care, like showering and talking to patients, but she questioned if that was right.

"Yeah, this is how nursing is supposed to be," Akin responded.

Nursing as a profession has changed over the last two years because of the pandemic, Akin said. She said she's learned to not take anything for granted even as the hospital environment returns to normal.

Health care is a team sport, Akin said, because it relies on collaboration between everyone taking care of the patient. Instilling that mindset in Morris was important, Akin said, because she wanted her sister to feel like she could go to her for advice, help or just to talk.

"It's kind of full circle from when we started out growing up and I finally got my little sister -- we have four brothers and she's the baby -- so I finally got a sister and now that sister is working health care with me," Akin said.

And she's struck by her sister's passion for the work.

"To see that she's stuck with it and she truly cares, like you can see her passion in it -- I can't even describe it," Akin said.

Morris said she's happy to have her sister at St. Mary's guiding her into the new reality of nursing.

"It's been so nice being able to start off here and have my older sister here, because I look up to her," Morris said. "She's also a big part of why I've gone into nursing, apart from everything that happened with our dad, because I've known that she's been in this career and she's always -- before COVID -- talked about how she loves it."

Morris said there's "a good possibility" she takes a position at St. Mary's upon graduation from LU, but she hasn't started looking at options or applying anywhere.

"I'll definitely take the semester to kind of look around, but if I ended up where I'm at now I'd be very happy with that," she said.

She enjoys working with her sister and the other nursing staff, hearing the hospital's daily prayer and talking about it with patients.

"St. Mary's has always been somewhat of a home and so landing here and being able to do clinicals here and then an internship and now teching, it would feel like a really good fit," she said. 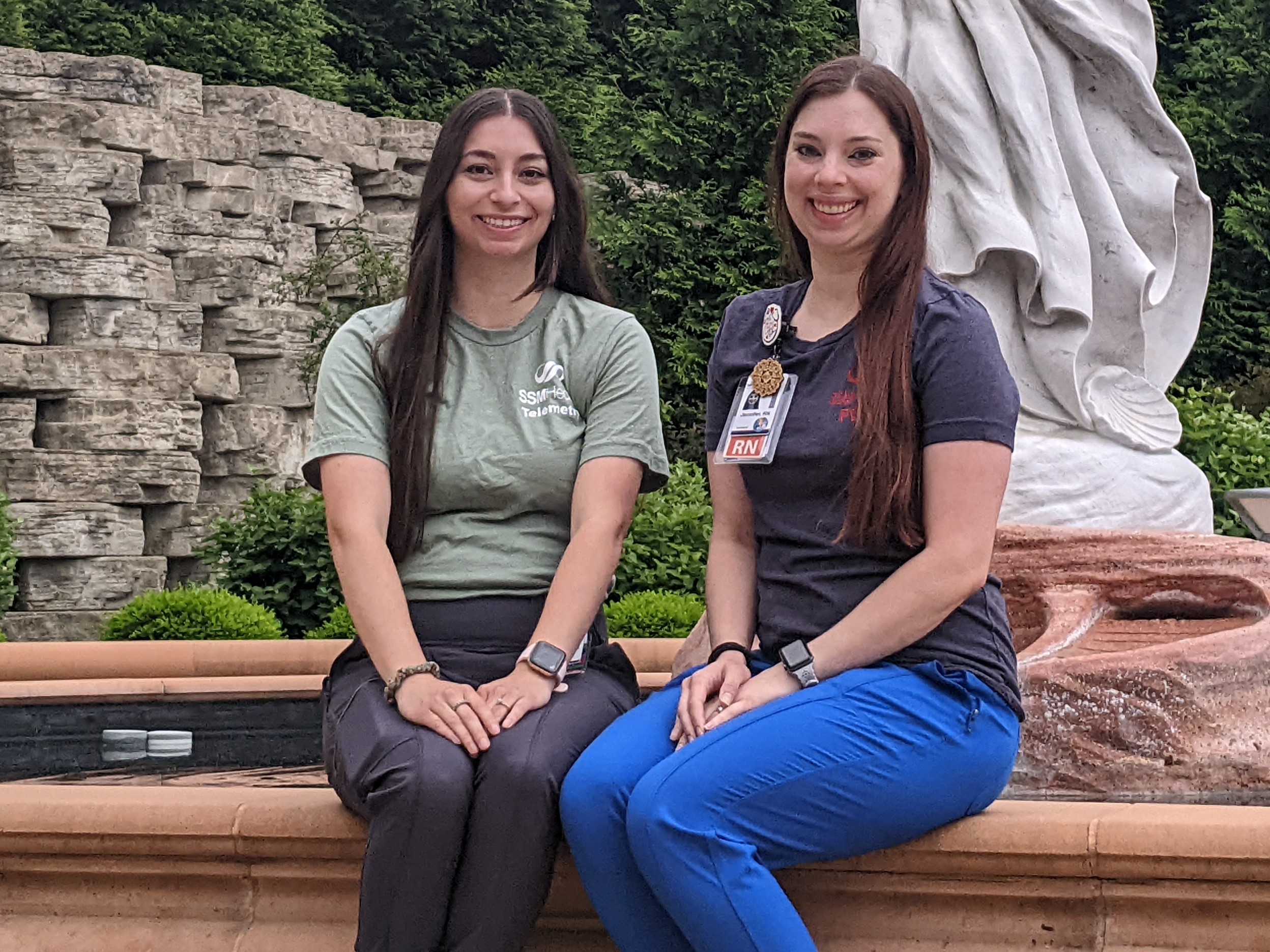 Print Headline: Nursing sisters find solace in each other during pandemic