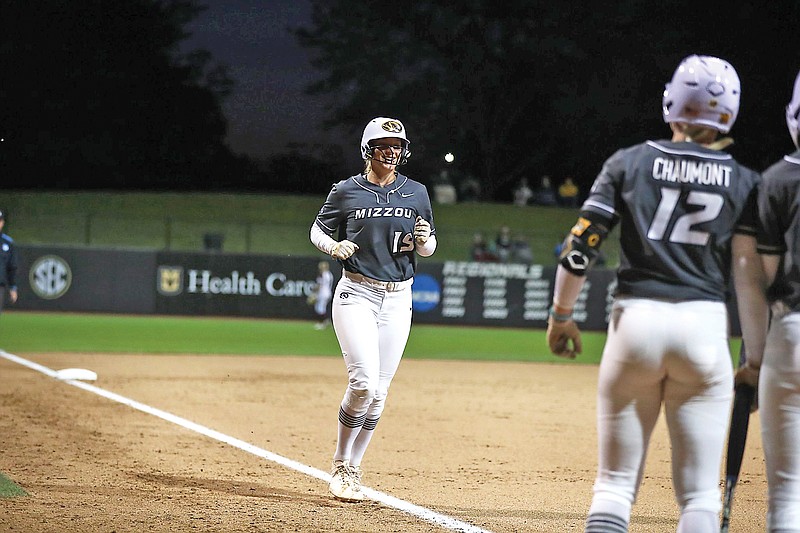 Krings struck out 11 batters -- which included striking out the side in the bottom of the seventh inning -- to complete a three-hitter Saturday night, leading the Missouri Tigers to a 2-0 win in an elimination game against Missouri State in the Columbia Regional of the NCAA Softball Tournament at Mizzou Softball Stadium.

With the win, 15th-seeded Missouri (38-21) advances to play Arizona (35-20) in the championship game of the Regional at 3 p.m. today. If the Tigers win, an “if necessary” game will follow at 5:30 p.m. If the Wildcats win, they will advance to next weekend’s Super Regional round.

Krings threw 109 pitches in her shutout, walking three batters. The Lady Bears put two runners on base in each of the first, third and fifth innings, but Krings got out of trouble each time, stranding all six runners.

Jenna Laird began the game with a leadoff triple to left-center field. Brooke Wilmes followed with an RBI single to left field, giving the Tigers a 1-0 lead.

Missouri scored its other run in the top of the second inning, when Kara Daly blasted an 0-1 fastball to right field for an opposite-field home run. The homer is the 13th of the season for Daly, a former Jefferson City Lady Jay who also has 26 RBI this season.

Daly had half of Missouri’s hits in the win, adding a two-out single to left field in the fourth inning.

Missouri State’s other scoring opportunity came in the bottom of the second inning. Tess Weakly drove a ball off the left-center field fence, but Wilmes took the throw and threw out Weakly attempting to stretch a single into a double.

Daphne Plummer had Missouri State’s other two hits, both singles.

Steffany Dickerson pitched the first 6⅔ innings for the Lady Bears. Dickerson, the Missouri Valley Conference pitcher of the year, struck out two without allowing a walk.

Missouri State, the MVC Tournament champion, ends the season with a 28-20 record.

Missouri began Saturday with a 2-0 loss to Arizona.

Charlie Scupin hit a two-run home run in the bottom of the fifth inning, scoring Izzy Pacho for the game’s only runs.

Missouri was limited to four hits by Arizona pitcher Hannah Bowen. The Tigers loaded the bases with walks to Casidy Chaumont and Emma Raabe and a single by Laird, but Bowen got a flyout to center field and a strikeout to strand all three runners.

Kendyll Bailey hit a one-out double to left-center in the sixth, bringing the tying run to the plate, but the Tigers were unable to bring her home.

Brooke Wilmes and Alex Honnold singled for Missouri’s other hits in the loss.

In the second game of Saturday’s tripleheader, Missouri State defeated Illinois 2-0. The loss eliminated the Fighting Illini from the Regional, as they ended the season with a 34-22 record.