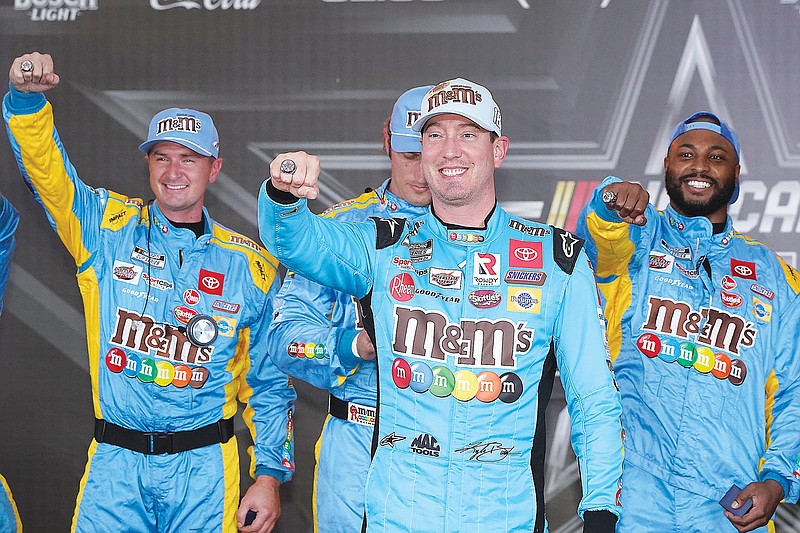 Kyle Busch and his crew show off their pole position rings after qualifications Saturday for the NASCAR All-Star race at Texas Motor Speedway in Fort Worth, Texas. (Associated Press)

FORT WORTH, Texas -- The NASCAR All-Stars during qualifying Saturday night were the pit crew members for Kyle Busch, who earned the pole for the annual $1 million non-points exhibition race.

Busch won the final round of an unusual elimination bracket involving the pit crews doing a four-tire pit stop when he beat Ryan Blaney to the finish line.

“Any time you’re able to showcase the pit crew’s ability and have them and their athleticism in this competition and in this qualifying format, I enjoy that,” Busch said. “Having those guys go over the wall certainly means a lot, especially the No. 18 bunch that I’ve had a lot of success with over the years.”

All 20 drivers locked into tonight’s 24-car All-Star race field went through a normal one-lap qualifying. The top eight then went into an elimination bracket, when two cars at a time were staged in temporary side-by-side stalls at the end of pit road. The drivers had to wait for a signal before charging forward for a four-tire pit stop, then raced a lap around the 1½-mile track.

Busch had an easy lap in the semifinal round when head-to-head against reigning Cup Series champion Kyle Larson, who won his last two All-Star starts.

Larson, who followed his All-Star win by also winning the fall Cup playoff race there, stalled his car before getting to his crew. That allowed 2017 All-Star winner Busch to easily advance to the final, even after his rear tire changer fell down.

“When you’re sitting there, you’re not like fully compressed into the clutch, you’re trying to find that sweet spot. … I just got a little too greedy obviously and stalled it,” Larson said. “It’s embarrassing. I mean, I’m the only guy who stalled.”

William Byron, who was beat by Blaney in the other semifinal, starts third and Larson fourth. Kurt Busch, Ross Chastain, Martin Truex Jr. and Aric Almirola rounded out the top eight.

The remaining four spots for the All-Star race will be determined in a three-segment race earlier today. The winner of each segment (20, 20 and 10 laps) will advance to the main event, with the final spot determined by fan vote.

It has been 20 years since the All-Star race was won by a driver in the event for the first time. That was Ryan Newman in 2002.

Rookie driver Austin Cindric and Chase Briscoe are first-timers locked into the field based on their wins this year. Cindric won the season-opening Daytona 500 for Team Penske, and Briscoe took his Stewart Haas Racing car to victory lane at Phoenix.

“To be able to say you’re one of those guys is a big deal. It’s definitely a who’s who of guys that are in that race. You know it’s all the bigger names in the sport,” Briscoe said. “So to be a part of that is is definitely special and humbling.”

Aside from the inaugural All-Star race won by Darrell Waltrip in 1985, the only driver other than Newman to win in his first chance was Dale Earnhardt Jr. in 2000.

Ross Chastain knows he should have drank more water during the week, and figures eating some more watermelon probably would have helped too.

Chastain, whose family owns a watermelon farm in Florida, said Saturday he was feeling fine -- and good for the All-Star race -- after suffering from dehydration at the end of the NASCAR Trucks Series race Friday night at Texas.

“It’s not fun, so I’m not going to let it happen again,” Chastain said.

Chastain, who has gotten his first two career Cup victories this season, tweeted a shirtless picture from the infield media center while getting IVs, and wrote, “Feeling like a million bucks.”

Cup driver Christopher Bell used to attend races at Texas Motor Speedway as a kid growing up in Oklahoma. When watching legends racing on the 1/5-mile asphalt track outside the main event he always thought about how cool it would be to be racing micro sprints there on a NASCAR weekend.

Bell will get to do that in September as part of “C Bell’s Micro Mania” at the Lil’ Texas Motor Speedway, which will be converted from asphalt to dirt before then. He had first presented the idea a few months ago to TMS officials.

Bell will drive in the event, and hopes to have other Cup regulars as well, along with the kids of some of the Cup guys for the junior division for ages 6-12.

“From the first time I saw Lil’ Texas I couldn’t stop thinking about how cool it would be to have a micro sprint race there,” Bell said.