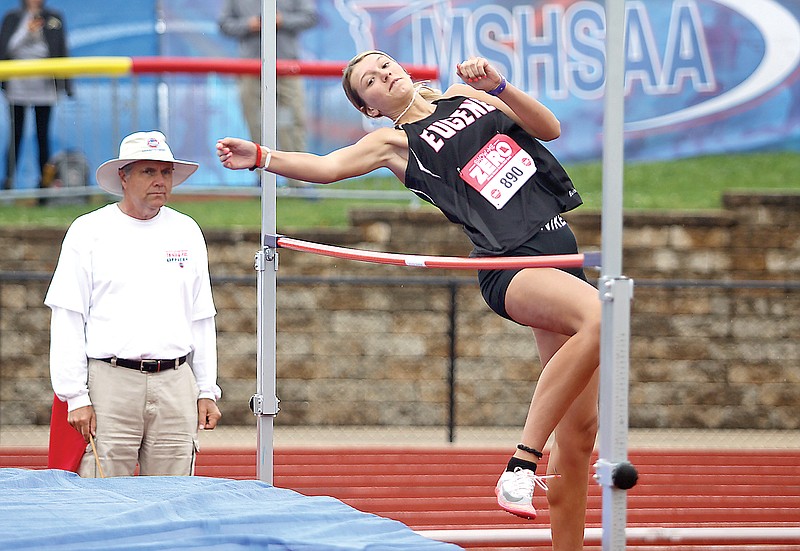 Eugene’s Olivia Angerer begins her jump over the bar during the girls high jump Saturday in the Class 2 track and field state championships at Adkins Stadium. (Greg Jackson/News Tribune)

Outside of the weather conditions, it was another good day for area athletes Saturday in Day 2 of the Class 2 track and field state championships at Adkins Stadium as five athletes received all-state honors by reaching the podium in their respective events.

The first event was scheduled to begin at 9:30 a.m., but a severe thunderstorm delayed the final day of the meet to a 1 p.m. start, leaving the athletes more time to think about what could go wrong, or right, in their events.

New Bloomfield’s Nathan Hinrichs led the way again on Day 2 by finishing third in the boys 1,600-meter run with a personal best time of 4:22.03, ending his high-school career on a high note after finishing 11th in the event last year.

“I knew it was a stacked field, especially for Class 2,” Hinrichs said. “I went in expecting pretty much anything could happen. Before the race, I pictured what would happen if I got boxed in, what if everything went wrong, what if I got a stitch. Then I pictured, what if everything went great. It turned out to be a perfect race. That pretty much played out exactly how I imagined it, it just couldn’t have gone any better.”

For the second straight day, New Covenant Academy’s Tanner Talley stole the show in the distance races after he beat out Hinrichs in the 3,200 on Friday by racing to a meet-record time 9:15.11. Talley was able to set another meet-record in the 1,600 as he raced ahead of the pack for a time of 4:12.27, beating the record of 4:15.07 set by College Heights Christian’s Caleb Hoover set in 2009. Talley would later go on to win the 800-meter run by matching a meet record set by Deko Ricketts of Bartstow in 2013 with a time of 1:54.78.

Eugene’s Olivia Angerer started the afternoon by claiming all-state honors with a sixth place finish in the girls high jump.

She cleared her first jump of 4 feet, 6.75 inches on the first try, leaped over the 4-8.75 bar on her second attempt and was able to clear 4-10.5 on her final attempt before failing to reach 5-0.5 in her three attempts to be eliminated, falling just short of the 5-0.25 mark she scored at last year’s meet to claim fourth in the event.

It may not have been the finish Angerer wanted, but making the podium for the second straight year is no small feat.

“It kind of sucks, but then again I am proud of myself because I made it this far,” she said. “… I think it was nervousness that kind of got me.”

Tipton’s Lily Burns was able to finish on the podium and receive all-state honors by finishing seventh in the girls shot put with a throw of 34-6.75, avenging her ninth-place finish from last year that left her just off the podium.

“It definitely feels a lot better, I still didn’t do quite as good as I wanted to,” Burns said. “I definitely wanted top three, and I definitely could have gotten top three, but today just wasn’t my day.”

Iberia’s 4x100-meter relay team of Chloie Ashton, Chloe Edwards, Addison Williams and Harper Rollins qualified for Saturday’s final round by running a time of 52.0 seconds in the Friday’s prelims, but were unable to match the time in the finals and finished in eighth place after completing the race in 53.12 seconds, which still gave them a place on the podium and all-state honors.

Eugene’s Ryder Belt finished out the day for the Eagles with an all-state finish of eighth place in the boys high jump after clearing 6-.75 on his third and final attempt.

Vienna and Linn saw its 4x800-meter relay teams compete in the final round Saturday, but neither were able to finish fast enough for all-state honors.

The Lady Eagles team of Aubrey Reeves, Jaedyn Schell, Madison Weeks and Claudia Wieberg raced to a time of 10:34.54 for 10th place, while the Lady Wildcats team of Ramsie Tschappler, Ellie Monnette, Rylie Jaegers and Myra Baker finished in 14th place with a time of 10:55.16.

There were multiple double- and triple-winners on the boys’ side.

Lexington’s Evan Gosnell took home the title in the 100- and 200-meter runs while also finishing first in the triple jump.

Keith Bass and Jonathan Van Hook were a part of Lutheran North’s winning relay teams in the 4x100 and the 4x200, while Julian Juszcyk was on the 4x200 team and also won the 300-meter hurdles.

Lawson’s Cooper Sliminski won individual titles in the 100- and 200-meter dashes. Whitfield saw its 4x400- and 4x800-meter relays teams capture titles with Charles Bobo, Jacob Hutchinson and James Milgie being on both teams. Milgie also took home the crown in the 800.

North Platte ran away with the Class 2 girls team championship by finishing with 71 points. Lawson came in second with 48 points, Saxony Lutheran claimed third with 42 points while Monroe City finished in fourth with 34 points.

Two girls stood out for their performances on the girls’ side.

Olivia Rogers led the way for North Platte by winning the 100- and 200-meter dashes while also being a part of the winning 4x100- and 4x200-meter relays teams. Haley Sampson competed on both relay teams as well.

Lawson’s Landen Wilson led the way in distance races by winning the 1,600- and 3,200-meter runs while also winning a title with Lawson’s 4x800 relay team.