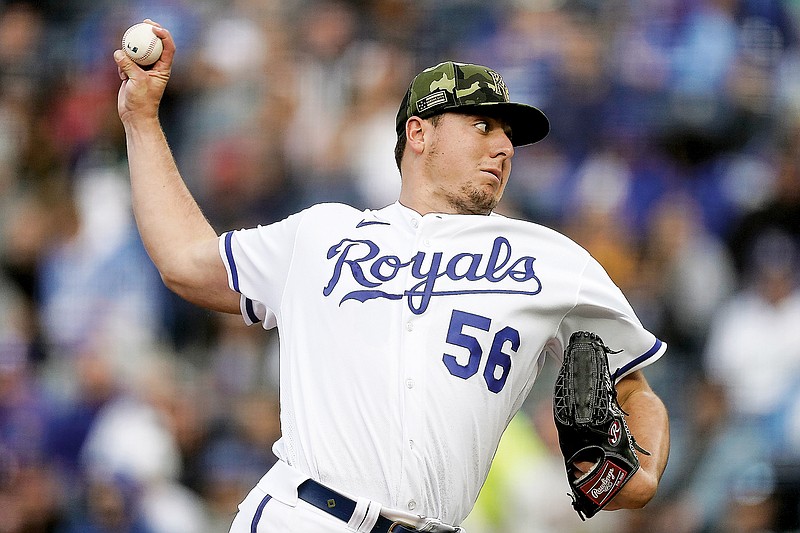 Royals pitcher Brad Keller throws to the plate during the second inning of Saturday night’s game against the Twins at Kauffman Stadium. (Associated Press)

KANSAS CITY -- Joe Ryan struck out six and the Minnesota Twins capped the game with a four-run ninth inning for a 9-2 win Saturday night against the Kansas City Royals.

Ryan (5-2) allowed one run on five hits in 5⅔ innings with six strikeouts.

“It was a good game overall,” Ryan said. “The boys brought good run support, which takes a lot of pressure off.”

Minnesota had a pair of two-run innings and was ahead going into the ninth, when the offense erupted -- including a two-run double by Carlos Correa. The top six batters in the Twins lineup all collected RBI in the win, and Minnesota’s Luis Arráez had two RBI and scored on a wild pitch.

“I thought we battled through the beginning of the game, but we stayed on them and put some good swings on the ball,” Twins manager Rocco Baldelli said. “Overall, it was a great offensive effort and just what we were looking for.”

Brad Keller (1-4) tossed seven innings for the Royals, giving up four runs on five hits with four strikeouts and three walks. He also notched his 400th career strikeout in the sixth inning.

Royals manager Mike Matheny said Keller “made really good pitches all evening long and pitched well enough to give us a chance to win.”

Emmanuel Rivera hit his second home run of the series with a solo shot in the seventh, and Andrew Benintendi went 3-for-3 with a walk and an RBI for the Royals.

Kansas City entered the game batting .154 with the bases loaded and came up empty in its lone opportunity in the sixth, trailing 4-1 at the time. The Royals left eight on base overall.

Notes: The Twins selected the contract of LHP Trevor Megill from Triple-A St. Paul and optioned LHP Devin Smeltzer to Triple-A. Minnesota also designated RHP Chris Vallimont for assignment. They also placed RHP Josh Winder (right shoulder impingement) on the 15-day injured list and activated Bailey Ober from the 10-day IL. … Bailey Ober (1-1, 2.75) is scheduled to start for Minnesota in the series finale this afternoon. Kansas City had not announced a starter as of Saturday night.