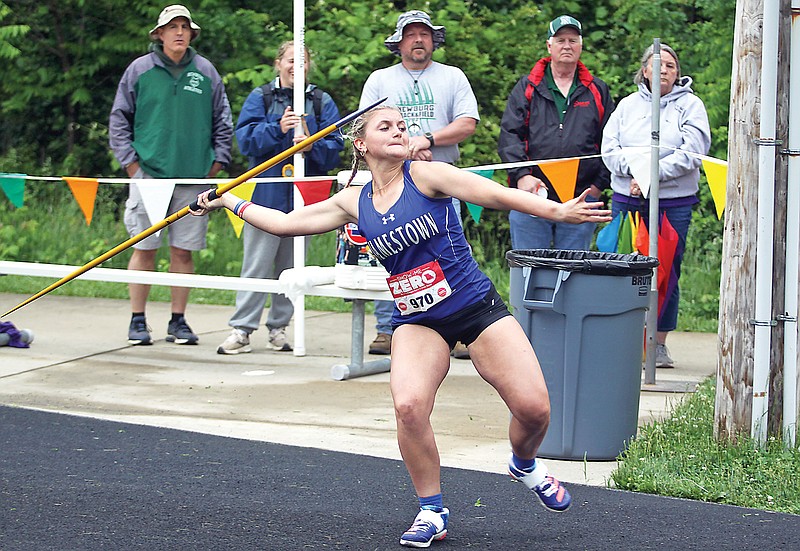 Five out of six isn’t too bad.

“I think the kids just did great, even Jaxson (got a personal record) and it was all just that fast,” Calvary Lutheran track and field coach Kerri Morris said. “The effort level was great, Kyle (Hagemeyer) PR-ed in the mile, Sydney (Morris) PR-ed in the discus, they just stayed focused. They worked really hard and I’m just so happy that paid off.

“A lot of teams come here and don’t get any medals. It’s nice to be on the board with some points.”

The Lions and Lady Lions walked away from the Class 1 and Class 2 state track and field championships at Adkins Stadium with five medals through the two-day event. Two boys medals, both from Kyle Hagemeyer, and three girls medals, two from Sydney Morris and one from Maddie Homfeldt.

After placing fourth in the Class 2 3,200-meter run Day 1 of the meet, Hagemeyer took the same spot in the 1,600-meter run Saturday.

Hagemeyer fell to the back of the pack at the start of the race, then began pushing up to get to a fight for sixth at the midway point. On the back stretch of the third lap, Hagemeyer made his move and pushed his way to fourth where he finished with a time of 4:26.26.

“It’s always one thing to get out fast so you don’t get boxed in or anything,” Hagemeyer said. “But then that race really ramped up intensity wise. Then it’s just adrenaline and it’s kind of just natural for everyone to pick up at the same time.”

They were the junior’s fourth and fifth state medals after taking first in both the Class 1 1,600 and 4x400-meter relay last year, as well as second in the 3,200.

“The biggest difference was definitely more people around you and I think going out fast and coming in faster,” Hagemeyer said of the difference between Class 1 and Class 2 races at state. “With so many people doing it, it was so much fun.”

Sydney Morris grabbed her second medal when she started the delayed meet in the discus.

Though her event was scheduled to start at 9:30 a.m. Saturday, Morris didn’t start throwing until after 1 p.m. because of inclement weather.

Morris started quickly with a throw of 99 feet, 7 inches, placing her first in the first of two flights. With the shortened schedule, every athlete got four throws with no championship round.

Morris then heaved a personal record of 106-1 on her third attempt, setting her up to watch the second flight from the top spot.

“That was probably the most nerve-racking part,” Sydney Morris said. “There was nothing I could do, but sit back and watch.”

The second flight saw six competitors beat Morris’ mark, leaving her on the seventh-place spot of the podium after taking fourth in the shot put Friday.

“After the way sectionals went last week, I was definitely more nervous for this one (than shot put),” Sydney Morris said. “But once I got that first throw in, I felt a lot better. It just felt good to get out there and throw and not worry about it.”

The Jamestown Lady Eagles climbed the podium throughout Day 2 as well.

Jolene Sorrells made her way up the podium three times.

Sorrells joined teammates Emma Baepler, Alyssa Hees and Annabelle Sumner when she went up the first time. The Jamestown 4x200-meter relay crew placed seventh with a run of 1:53.88.

“We were thinking it would be a little rough because of the rain,” Sorrells said. “But when I started, it felt really good. We got a medal and I’m really proud of everybody. It’s an accomplishment within itself just to be standing here with everybody.”

Sorrells then joined Sumner, Hees and Raena Lieser in the sixth spot on the podium when the Lady Eagles ran a time of 4:27.2 in the 4x400-meter relay.

“It’s really nice,” Sumner said of being on the podium with her relay teammates. “You don’t think of track as a team sport, so being part of a relay is a lot more like a family.”

“Getting three is crazy because I’m only a sophomore, I can’t even describe it. It’s incredible,” Sorrells said. “I’d say (the javelin) was a little struggle because of the rain.”

Audrey Stuemph was the lone St. Elizabeth athlete to medal, grabbing eighth in the pole vault by clearing the bar at 8-4.25 on her first attempt.

“As a senior, the past couple of years I wasn’t able to go because of COVID and family things,” Stuemph said. “My goal for senior year was to get all state. And just being here was great. I’m so glad to continue for St. Elizabeth, we’re definitely known for pole vaulting and I can’t wait to see what the younger girls do.”

James Scheperle just missed the podium for Jamestown in the boys’ javelin. Scheperle far outdid his initial attempt when he heaved the javelin 135-5 on his second try, leaving him ninth.

Jaxson Jobe ran a personal record time of 2:06.46 in the 800-meter run for Cavalry Lutheran to finish off the Lions’ season.

“We didn’t have that many kids, but today was a great representation of Calvary,” Kerri Morris said. “That much more help to build the program and get people interested. I was really impressed with all of them. They all kept their cool. … Even with weather changes and schedule changes, they showed a lot of maturity and I’m proud of all their efforts.”

Principia ended atop the Class 1 boys team standings with 73 points, while Worth County had 47 for second, Green City placed third with 44 and West Nodaway totaled 39 for fourth.

Lakeland’s Garrett Strange took first with a meet record of 183-7 in the javelin throw and took the top spot in the discus with a throw of 164-5.

Drexel ended at the top of the Class 1 girls standings with 46 points, while Valle Catholic had 41 for second, Delta took third with 38 and East Atchison placed fourth with 37.