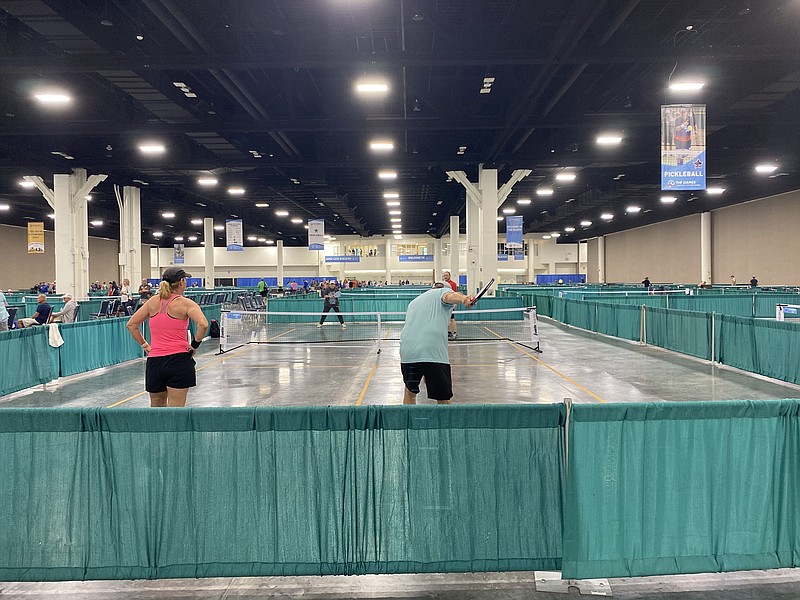 About 1,500 pickleball players, all 50 years old and older, are competing this week in a national senior championship tournament in Fort Lauderdale. (Austen Erblat/South Florida Sun Sentinel/TNS)

FORT LAUDERDALE, Fla. -- About 1,500 pickleball players, all 50 years old and older, were competing last week in a national championship in Fort Lauderdale. An additional 1,000 people have attended to watch and cheer on their friends, family and favorite teams. The oldest player this year was 92 years old.

"I think everyone that picks up the paddle and tries, they get hooked," tournament participant Lee Ingram, 53, said.

The event was hosted by the National Senior Games Association, which brings thousands of athletes from around the world to its annual events, according to tournament director David Jordan.

Last year's was held in Albuquerque and saw just under 14,000 athletes who competed in about 20 individual and team sports. This year's took place at the Broward County Convention Center.

Officials didn't yet have a total number of athletes who competed this year, but they've seen a steady increase in numbers since their start in 1987, when 2,500 athletes competed in 15 sports at their inaugural event in St. Louis.

"Everyone seems to be having a great time," Jordan said. "The turnout was great. It was way more than we ever expected. Last year we had 1,200 (pickleball players) in Albuquerque and we thought that was probably about as many as we'd get here, but we actually had 1,700 sign up, but because of COVID, we had about 200 drop out."

Seniors competed in a hall on the second floor of the convention center as attendees watched balls get volleyed back and forth. More competitive games saw dozens of people gathered in front of the courts, cheering loudly when their preferred team triumphed.

For those who don't play, pickleball is often described as a mix of tennis, ping pong, badminton and racquetball. The court is about half the size of a tennis court and usually requires less running, especially in two-versus-two games.

Tim Craig competed last Saturday and has been playing pickleball since 2016. He is an instructor in Texas.

The game has exploded in popularity over the last 10 years and developers are incorporating more pickleball courts in new senior communities, said Craig, 60, of Phleugerville, Texas.

Attendees and players alike appreciated that the games were indoors and out of the heat, although several players bemoaned how slick the playing surface was.

The oldest competitor in this year's pickleball tournament was Joyce Jones, 92, of Seattle.

Ingram had just lost her latest game after a series of several wins and losses in her tournament bracket. She's been playing for about four years.

An older friend had tried to get her to play pickleball years ago, "but I had said it was an old person's game," Ingram, of Auburn, Alabama, said.

"But she was so persistent that she got me out there before 50, and I'm hooked."

Next year's National Senior Games will take place in Pittsburgh.

Print Headline: ‘Anyone from 8 to 80 can play’ More than 1,000 seniors compete in national pickleball tournament