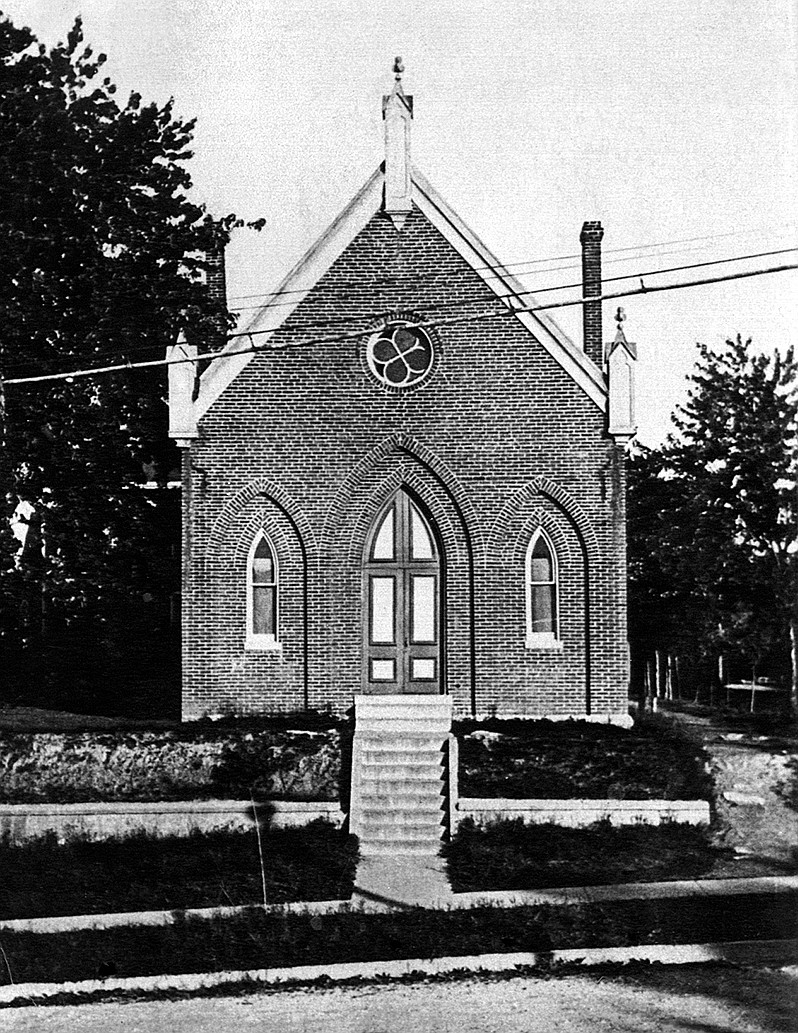 The German Methodist Church in Jefferson City is shown on the northeast corner of Broadway and West Elm streets, as seen from Broadway. (Courtesy of Arthur Fieker, 1911)

Not many today know that a separate German Methodist denomination had two congregations with churches in Cole County.

Methodism spread across America in the early 1800s as settlers moved westward. Itinerant missionary Methodist preachers realized they needed German-speaking preachers to reach the many German settlers. Thus, a German-speaking branch of Methodism was founded in the 1830s, the Deutsche Methodiste Bischöfliches Kirche, or German Methodist Episcopal Church, headquartered in Cincinnati with a conference in St. Louis.

A major appeal of Methodism to frontier settlers was its praise and joy in worship that uplifted them despite pioneer hardships. This message contrasted with the emphasis on human sinfulness that characterized German churches.

German Methodist preacher Sebastian Barth began missionary work in Cole, Moniteau and Osage counties in the early 1840s. In Cole County, Bethel congregation was established in a log church before 1849 on present Oak Ridge Road, one mile north of U.S. 54. In 1870, Bethel moved to Osage Bluff, on a site on Route E, 2 miles southwest of Route B, where a Methodist meeting had been held in 1865. The Osage Bluff log church was replaced by a frame church around 1899. The Osage Bluff congregation included Engelbrecht, Popp and Zimmermann families, among others. In 1951, the disbanded Osage Bluff congregation sold its church to Friedens Evangelical Church in Brazito, and it was moved to Brazito and attached to the rear of Friedens Church. The Osage Bluff German Methodist cemetery remains at the original church site.

When Germans began settling in the Southside of Jefferson City, German Methodists organized there in the 1840s, buying land in the 300 block of West Elm and building a log cabin there (demolished around 2015). The emerging congregation likely worshiped in it. The Jefferson City congregation, which had no consecrated name, erected a brick church in 1874 on the northeast corner of Broadway and West Elm under the direction of Pastor G.S. Reitz. It was dedicated on Dec. 13, 1874. Methodists had a practice of changing pastors every two years, and the list of pastors serving the Jefferson City congregation during its 42 years is long.

The church could seat about 60. It was heated by two wood/coal-burning stoves and lighted by kerosene lamps. It had six Gothic-arch windows on the sides, and the front doorway opened from Broadway Street. Rather than a cross, three handmade wood ornaments rose above the steeply sloping roof. Members and local labor likely constructed the simple church without an architect's help. Names of members included Steininger, Arzt, Eberhardt, Maus, Thomas (my grandparents), Petry, Baurichter, Offel, Saar, Sandfort, Rauhe, Miller, Viesmann, Lessenhop, Koeller and Weymeyer. One difference between the German and mainstream Methodists concerned alcohol. In those years, Methodists nationally were leading the drive for abstinence, while German Methodists retained their traditional beer.

According to St. Louis Conference statistics, membership in 1900 was 77, with 60 students and seven teachers in a Sunday school, and property worth $3,500.

Membership declined after 1900 because members and their children had become English speakers, and German immigration had dropped, rendering a separate German-speaking Methodist congregation unnecessary. Reinhold Luecke was the last resident pastor in 1912. Later pastors came from Hermann to hold services at Jefferson City and Osage Bluff. My grandfather Albert Thomas rented a buggy from Tihen's livery to take pastors from the train depot to the church, then to Osage Bluff for afternoon services and return.

The St. Louis Conference's 1915 yearbook contains the last report from the Jefferson City congregation. Disbanding the Jefferson City church was not due to the pressure of anti-German attitudes during World War I, as has been written elsewhere, but to conversion to English. The national German Methodist Church, which had boasted 740 congregations in 1900, formally merged into the Methodist Church in 1925. The term Episcopal was generally unused.

What happened to the members in Jefferson City? Some, like my grandparents and the Petrys, joined nearby Central Evangelical Church. Some joined the First Methodist Church on Capitol Avenue, and those living in Callaway County joined the Cedar City Methodist Church.

When the Jefferson City German Methodist Church closed, member Albert Thomas, who lived next door, bought the vacant building and rented it in the 1920s to friend Fred Goldammer for a carpentry and upholstery shop. In 1930, Thomas converted the church shell into a duplex, shifting its entrance to Elm Street. Furniture and carpentry of the church were incorporated into remodeling. My grandparents Albert and Wilhelmina Thomas occupied the first floor, and their married daughter Edna and son-in-law Walter A.F. Schroeder occupied the second floor. It is likely the oldest existing structure in Jefferson City built for religious worship. It testifies to the former existence of a German Methodist Church.

Walter Schroeder grew up in Jefferson City's historic German Southside now known as Old Munichburg. A retired professor of geography, he is devoted to preserving cultural history and is the author of three books on the history of the Old Munichburg neighborhood. 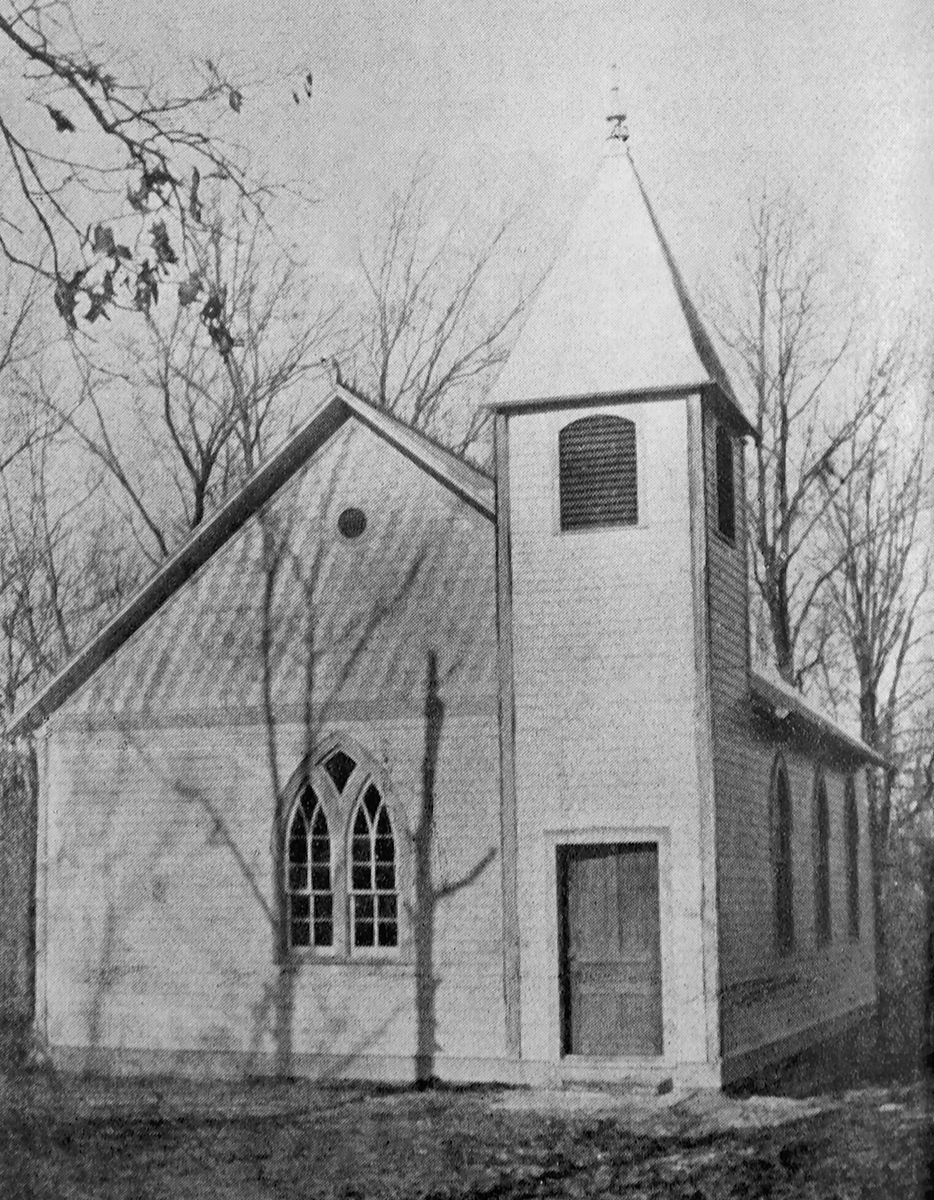