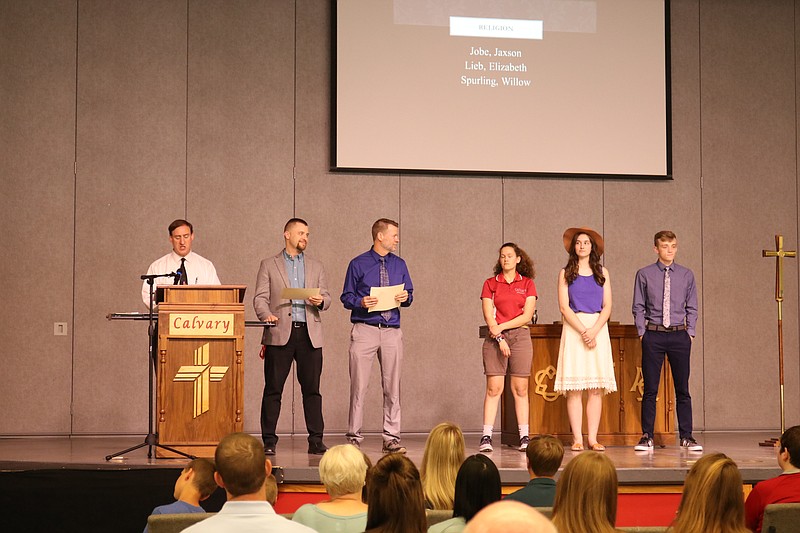 The awards ceremony began with the hymn "How Firm a Foundation," and then moved into recognition of the Jefferson City Area Chamber of Commerce's Outstanding Leadership Award.

The award went to:

• Nathan Erickson for being a "hard worker, a critical thinker and a leader in class discussion."

• Carter Hunget for his "servant heart" and ability to take charge.

• Cole Wolken for developing "self-motivation" and being a positive example.

Academic awards were given out by department.

For religion, the winners were: Jaxson Jobe, Elizabeth Lieb and Willow Spurling. The awards were:

• Old Testament: Willow Spurling for her ability to identify the relevance of the prophets today.

For English, the award winners were:

• Hope Roettgen for diligent work, helping others, and reaching the highest grade in the class.

• Juliana Fanning for a good attitude while learning.

• Ben Hardin for full effort and deep and humorous writing.

• Elizabeth Lieb for enthusiasm and leadership in the classroom.

For math, the award winners were:

• Jessi Johnson for quick and eager learning and helping others.

• Ben Kuhlmann for his willingness to take on tough problems and love of learning.

• Julianna Fanning for academic excellence and willingness to support her classmates.

• Elizabeth Lieb for her "drive for deep understanding."

• Natalie Sommerer for her hard work, diligence, and critical thinking.

• Maddy Sprengel for her constant striving for success and help for her classmates.

For science, the award winners were:

• Jonathan Morris for his curiosity and work ethic.

• Belle Haight for her effort and participation.

• Elizabeth Lieb for her "determination that inspires many."

• Micah Spurling for engagement in class and a positive attitude.

For foreign language, the award winners were:

• Willow Spurling for her work ethic and dedication to Spanish.

• Carter Brooks for his comprehension and use of Spanish daily.

For social studies, the award winners were:

• Adam Johnson for class participation and the highest percentage for American history.

• Natalie Sommerer for her research skills and the highest class percentage for decades history class.

• Josiah Spurling for his drive and positive attitude and "appreciation for history."

For health and physical education, the award winners were:

• Maddy Sprengel for commitment to her work and an embrace of God's word in her life.

• Beau Blaise for improvement in strength and skills.

For practical arts, the award winners were:

• Eric Forney for his openness to new ideas and concepts in study skills.

• Jaxson Jobe for his effort in woodshop.

• Adam Johnson for his efficiency and help for others in computer programming.

• Kaleigh Kaiser for her progress and willingness to help others in ACT preparation.

• Tyler Loveall for his volunteerism and dedication in FACS.

• Hope Roettgen for dedication to improvement and accuracy at speeds of 115 words per minute in keyboarding.

For fine arts, the award winners were:

• Micah Christman for his skill and patience in art.

• Nathan Erickson for seeking to improve his skills in band and understanding in videography.

• Elizabeth Lieb for excitement and leadership in acting, directing and tech operating.

• Samuel Tritz for his passion and ability to surpass expectations in photography.

For art, the award winners were:

• Micah Christman for his painting.

• Willow Spurling for her painting.

• Maddy Sprengel for her print-making.

• Laura Moody for her best in show in conference, performance in the emerging artists competition and Mayor's Choice sketch for sketch day.

Ben Hardin was recognized as the delegate for the Sophomore Pilgrimage.

The members of the speech team were recognized for their achievements throughout the season, and three students were recognized individually with awards representing Calvary Lutheran's mission of building Christian leaders:

• Building Award: Jessi Johnson for making the time to participate amid a busy schedule.

• Leadership Award: Elizabeth Lieb for instructing others and making sacrifices to commit to the team.

The members of the drama team were also recognized, and three members were recognized individually:

• Christian Award: Willow Garwood for exemplifying love and building up other members of the cast.

• Leader Award: Molly Wolken for a willingness to take charge.

The Scholar Bowl team was also recognized, along with three individual members:

• Leader Award: Alex Roettgen for leadership as a team captain.