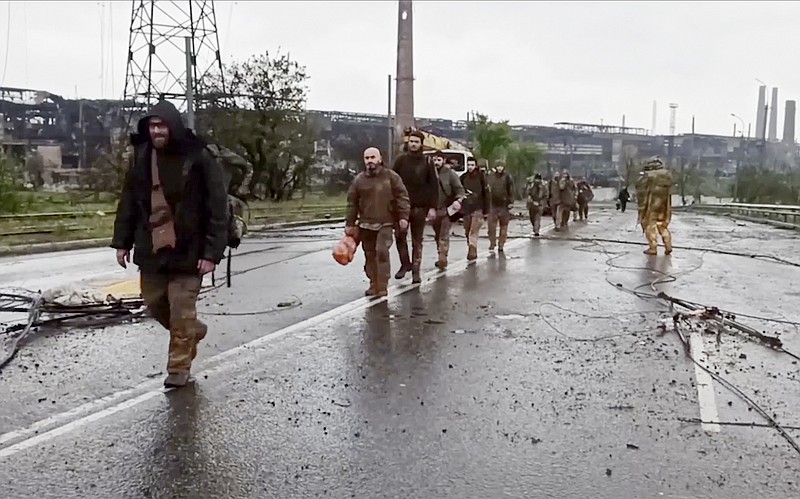 KYIV, Ukraine (AP) -- The fate of hundreds of Ukrainian fighters who surrendered after holding out against punishing attacks on Mariupol's steel factory hung in the balance Thursday, amid international fears the Russians may take reprisals against the prisoners.

The International Committee of the Red Cross gathered personal information from hundreds of the soldiers -- name, date of birth, closest relative -- and registered them as prisoners of war, as part of its role in ensuring the humane treatment of POWs under the Geneva Conventions.

Amnesty International tweeted that the Ukrainian soldiers are now prisoners of war and as such "must not be subjected to any form of torture or ill-treatment."

More than 1,700 defenders of the Azovstal steel plant in Mariupol have surrendered since Monday, Russian authorities said, in what appeared to be the final stage in the nearly three-month siege of the now-pulverized port city.

At least some of the fighters were taken by the Russians to a former penal colony in territory controlled by Moscow-backed separatists. Others were hospitalized, according to a separatist official.

However, an undisclosed number remained in the warren of bunkers and tunnels in the sprawling plant.

In a brief video message, the deputy commander of the Azov Regiment, which led the defense of the steel mill, said he and other fighters were still inside.

"An operation is underway, the details of which I will not announce," Svyatoslav Palamar said.

President Volodymyr Zelenskyy said he was working to ensure "the most influential international forces are informed and, as much as possible, involved in saving our troops."

While Ukraine expressed hope for a prisoner exchange, Russian authorities have threatened to investigate some of the Azovstal fighters for war crimes and put them on trial, branding them "Nazis" and criminals.

The Azov Regiment's far-right origins have been seized on by the Kremlin as part of an effort to cast Russia's invasion as a battle against Nazi influence in Ukraine.

Meanwhile, in the first war crimes trial held by Ukraine, a captured Russian soldier testified he shot an unarmed civilian in the head on an officer's orders, and he asked the victim's widow to forgive him. The soldier pleaded guilty earlier in the week, but prosecutors presented the evidence against him in line with Ukrainian law.

In the Poltava region, two other Russian soldiers appeared in court Thursday on war-crimes charges that they shelled civilians. Prosecutors said both pleaded guilty. The next court session in their case was set for May 26.

Also, more U.S. aid appeared to be on its way to Ukraine when the Senate overwhelmingly approved a $40 billion package of military and economic aid for the country and its allies. The House voted for it last week. President Joe Biden's quick signature was certain.

"Help is on the way, really significant help. Help that could make sure that the Ukrainians are victorious," Senate Majority Leader Chuck Schumer said.

Taking the Azovstal steel plant would allow Russia to claim complete control of Mariupol and secure a long-sought victory. However, it would be a mostly symbolic victory at this point, since the city is already effectively in Moscow's hands and analysts said most of the Russian forces that were tied down by the battle there have already left.

Kyiv's troops, bolstered by Western weapons, thwarted Russia's initial goal of storming the capital, Kyiv, and have put up stiff resistance against Moscow's forces in the Donbas, the eastern industrial region that President Vladimir Putin has set his sights on capturing.

The surprising success of Ukraine's troops has buoyed Kyiv's confidence.

Mykhailo Podolyak, an adviser to Ukrainian President Volodymyr Zelenskyy who was involved in several rounds of talks with Russia, said in a tweet addressed to Moscow: "Do not offer us a cease-fire -- this is impossible without total Russian troops withdrawal."

"Until Russia is ready to fully liberate occupied territories, our negotiating team is weapons, sanctions and money," he wrote.

Russia, though, again signaled its intent to incorporate or at least maintain influence over areas its troops have seized.

Deputy Prime Minister Marat Khusnullin this week visited the Kherson and Zaporizhzhia regions, large parts of which have been under the control of Russian forces since shortly after the invasion began in February. He was quoted by Russian news agencies as saying the regions could become part of "our Russian family."

Also, Volodymyr Saldo, the Kremlin-installed head of the Kherson region, appeared in a video on Telegram saying Kherson "will become a subject of the Russian Federation."

In other developments, Gen. Mark Milley, chairman of the U.S. Joint Chiefs of Staff, spoke by phone on Thursday with his Russian counterpart for the first time since the war began, and they agreed to keep the lines of communications open, the Pentagon said.

Zelenskyy said 12 people were killed and dozens more wounded in the city of Severodonetsk, and attacks on the northeastern Chernihiv region included a severe strike on the village of Desna, where many more died and rescuers were still going through the rubble.

On the Russian side of the border, the governor of Kursk province said a truck driver was killed by shelling from Ukraine.

At the war crimes trial in Kyiv, Sgt. Vadim Shishimarin, a 21-year-old member of a Russian tank unit, told the court that he shot Oleksandr Shelipov, a 62-year-old Ukrainian civilian, in the head on orders from an officer.

Shishimarin said he disobeyed a first order but felt he had no choice but to comply when it was repeated by another officer. He said he was told the man could pinpoint the troops' location to Ukrainian forces.

A prosecutor has disputed that Shishimarin was acting under orders, saying the direction didn't come from a direct commander.

Shishimarin apologized to the victim's widow, Kateryna Shelipova, who described seeing her husband being shot just outside their home in the early days of Russia's invasion.

She told the court she believes Shishimarin deserves a life sentence, the maximum possible, but that she wouldn't mind if he were exchanged as part of a swap for the Azovstal defenders. 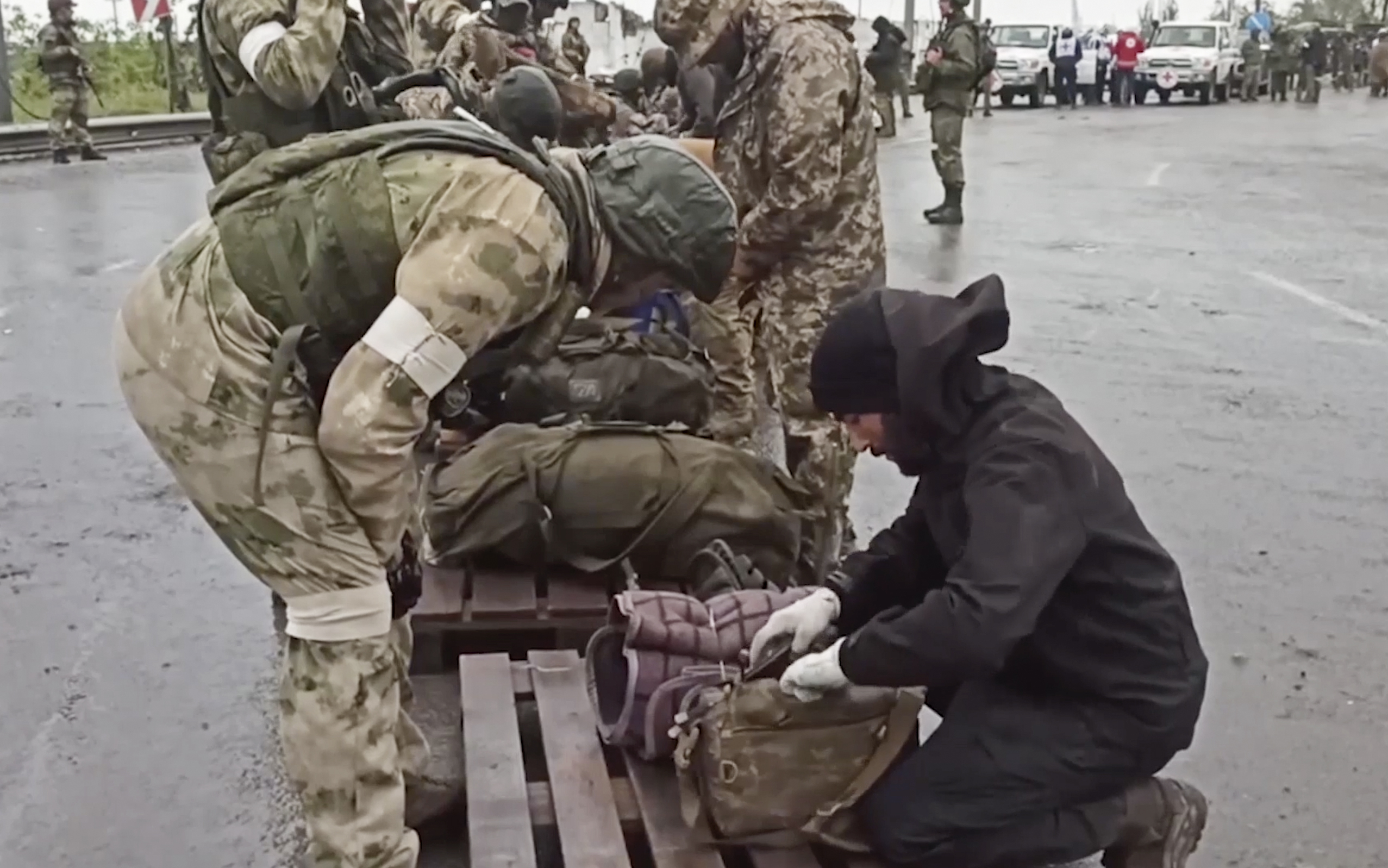 In this photo taken from video released by the Russian Defense Ministry on Thursday, May 19, 2022, shows Russian servicemen frisking Ukrainian servicemen after they leaved the besieged Azovstal steel plant in Mariupol, in territory under the government of the Donetsk People's Republic, eastern Ukraine. (Russian Defense Ministry Press Service via AP) 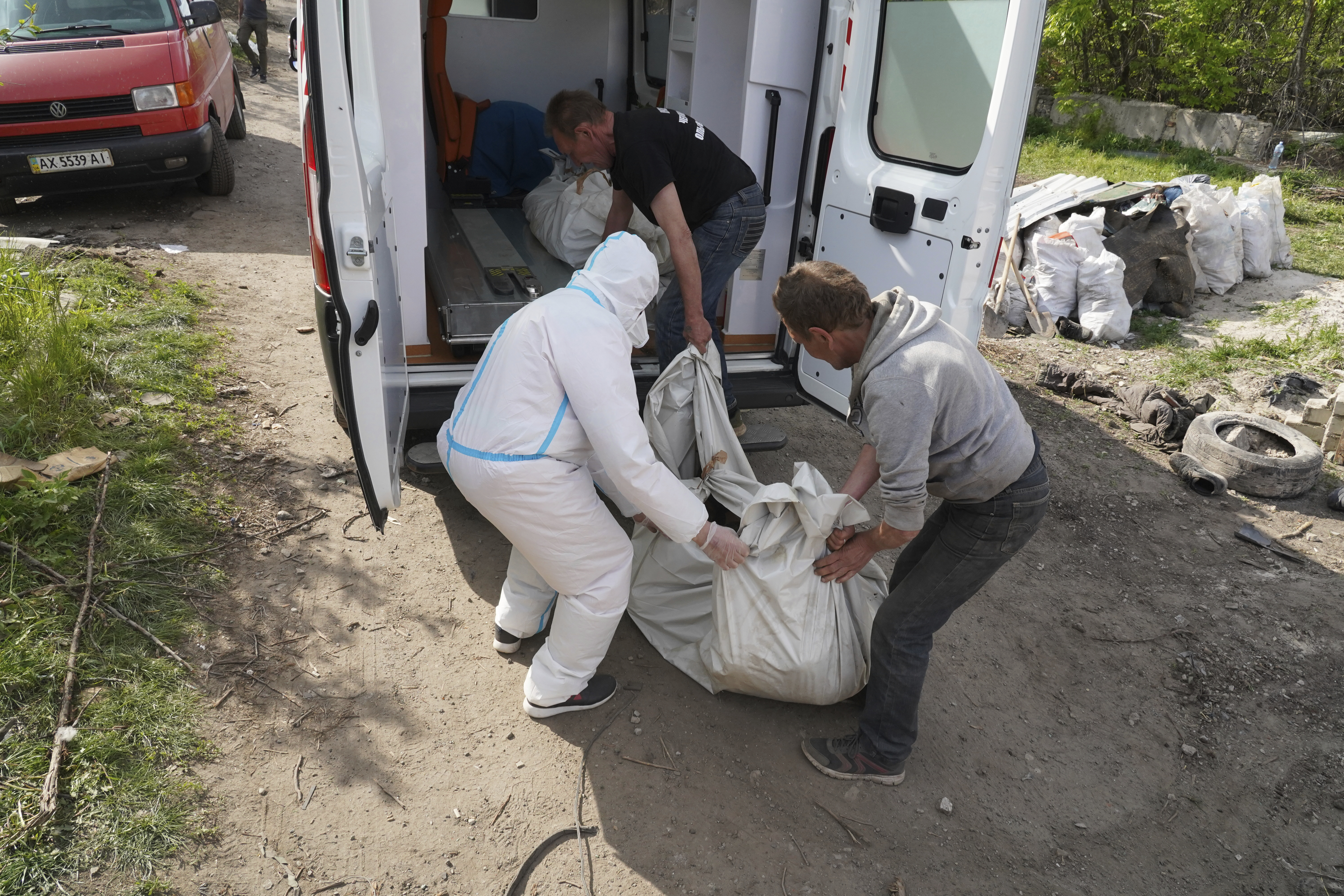 Volunteers move a body of a killed Russian soldier during the exhumation in the village of Malaya Rohan, on the outskirts of Kharkiv, Thursday, May 19, 2022. (AP Photo/Andrii Marienko) 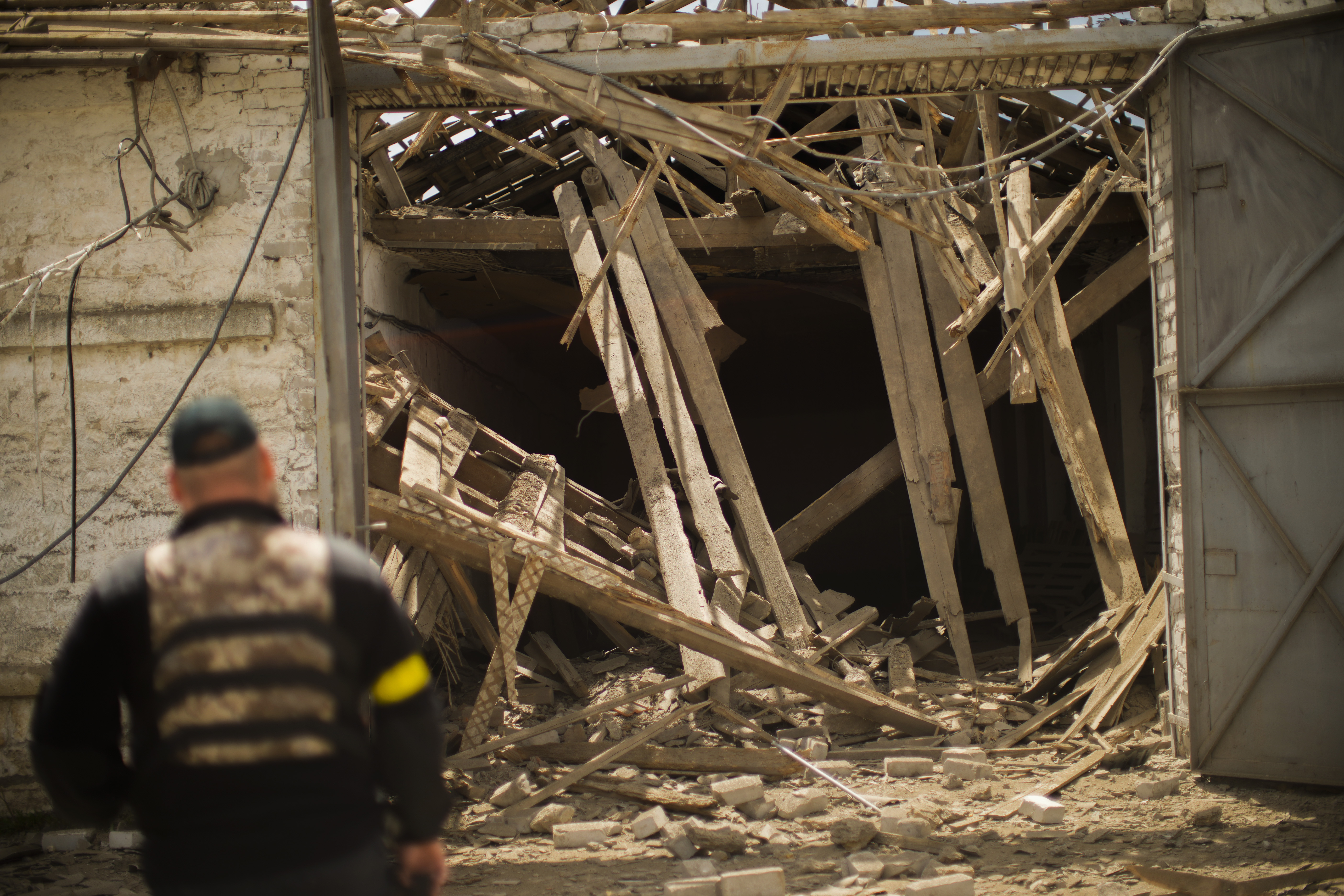 A Ukrainian policeman checks the wreckage in a heavily damaged sunflower seeds processing plant after a Russian bombing in Velyka Kostromka village, Ukraine, Thursday, May 19, 2022. Martsyniuk and her three young children were at home when the attack occurred in the village, which is a few kilometres from the front lines. They all survived unharmed. (AP Photo/Francisco Seco) 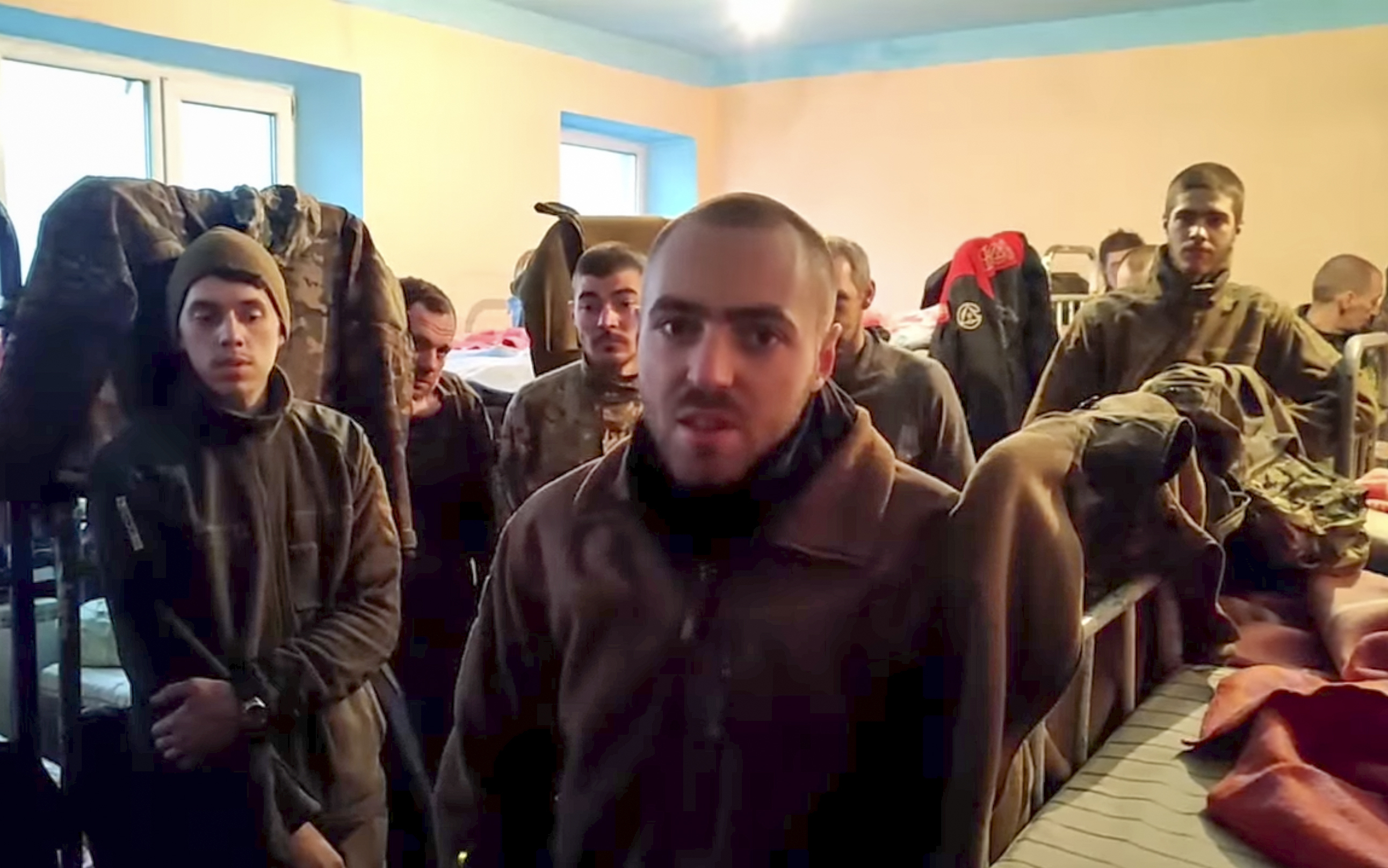 In this photo taken from a video released by the Russian Defense Ministry on Thursday, May 19, 2022, Ukrainian servicemen in a penal colony in Olyonivka, territory under the government of the Donetsk People's Republic's control, eastern Ukraine, after leaving the besieged Azovstal steel plant in Mariupol. (Russian Defense Ministry Press Service via AP) 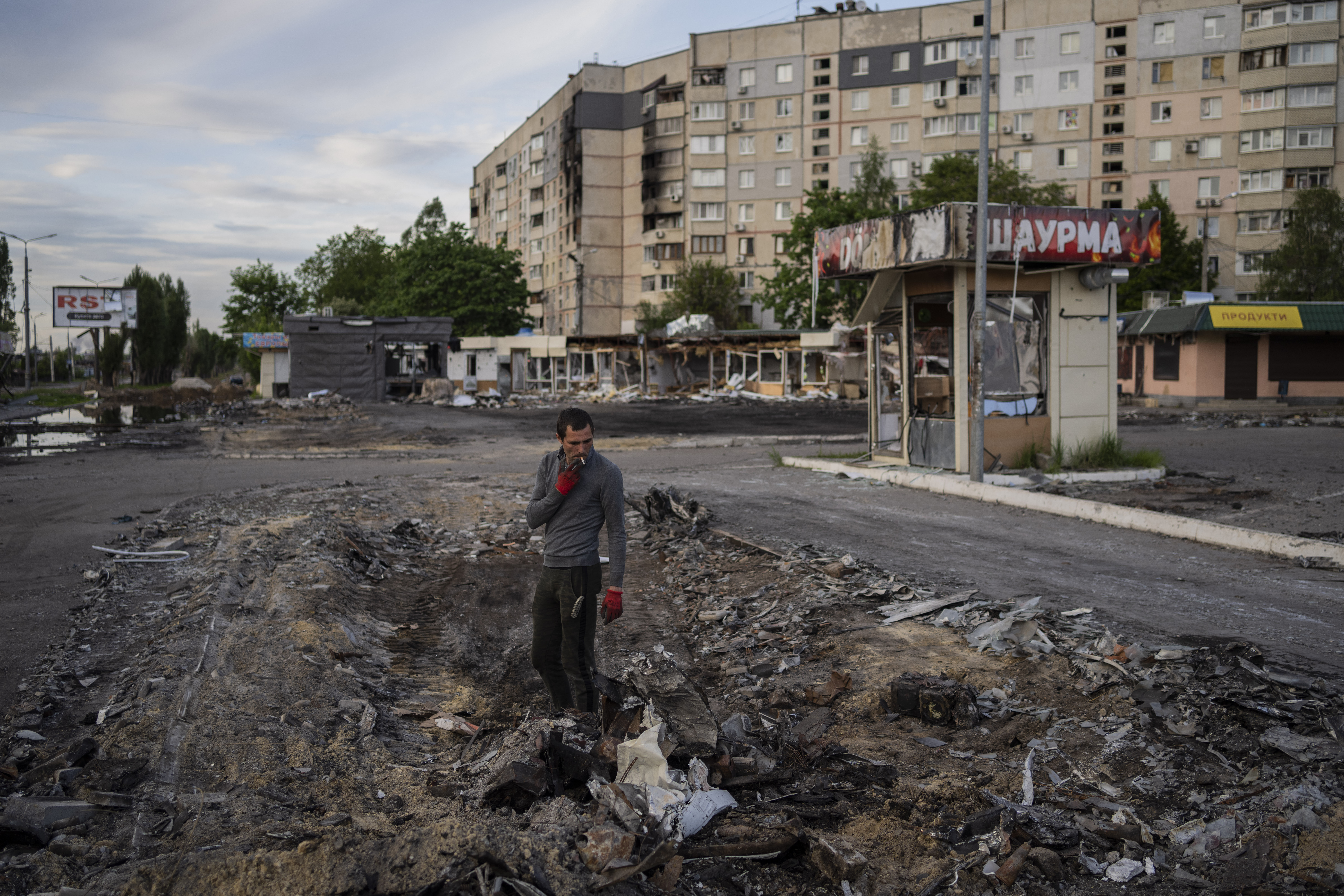 A man searches for metal scraps in a shelled neighbourhood in Kharkiv, eastern Ukraine, Thursday, May 19, 2022. (AP Photo/Bernat Armangue) 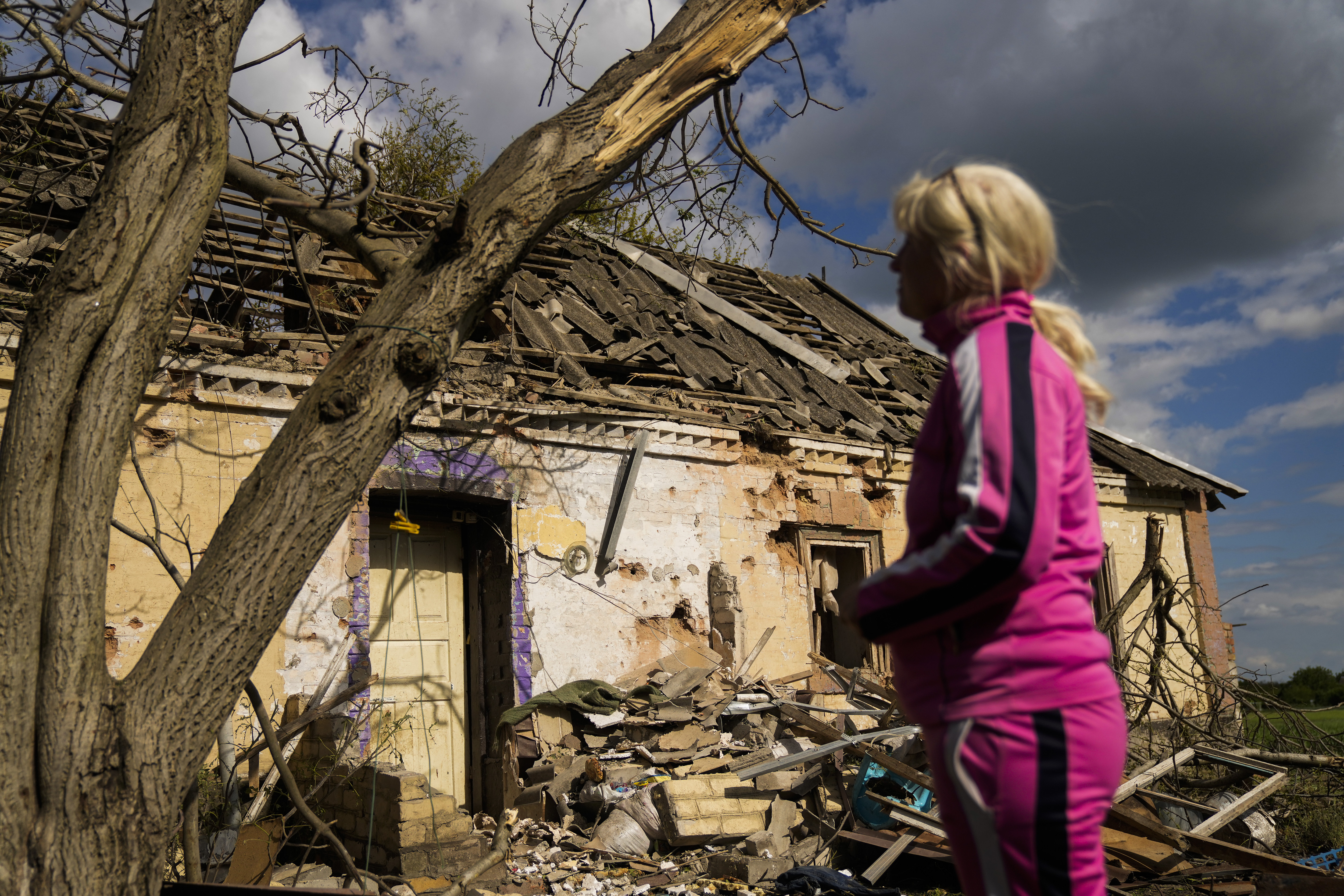 Iryna Martsyniuk, 50, stands next to her heavily damaged house after a Russian bombing in Velyka Kostromka village, Ukraine, Thursday, May 19, 2022. Martsyniuk and her three young children were at home when the attack occurred in the village, a few kilometres from the front lines, but they all survived unharmed. (AP Photo/Francisco Seco) 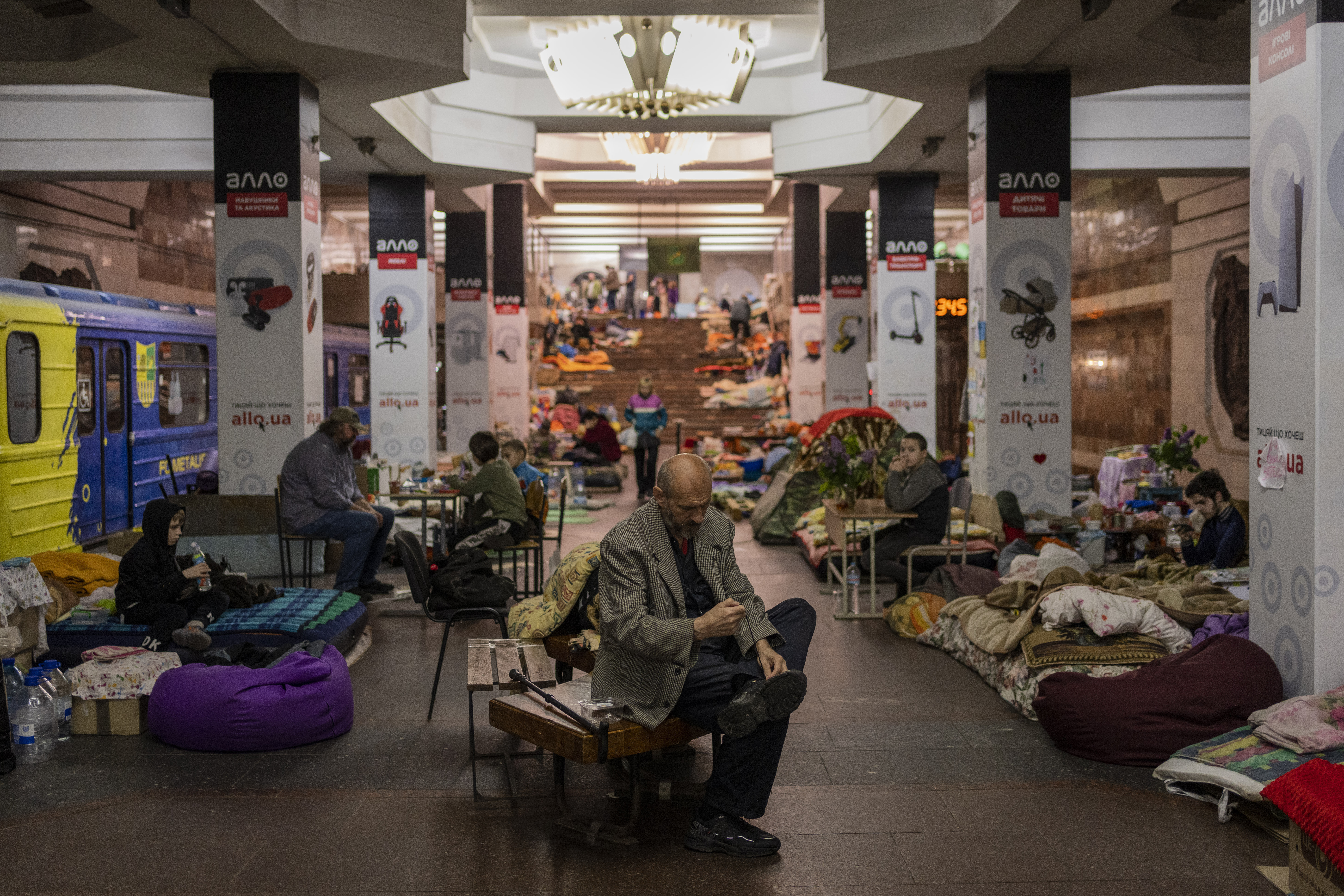 Residents stay in the city subway of Kharkiv, in eastern Ukraine, on Thursday, May 19, 2022. Although the bombings in Kharkiv have decreased and the subway is expected to run beginning of next week, still some residents use it as a temporary bomb shelter. (AP Photo/Bernat Armangue) 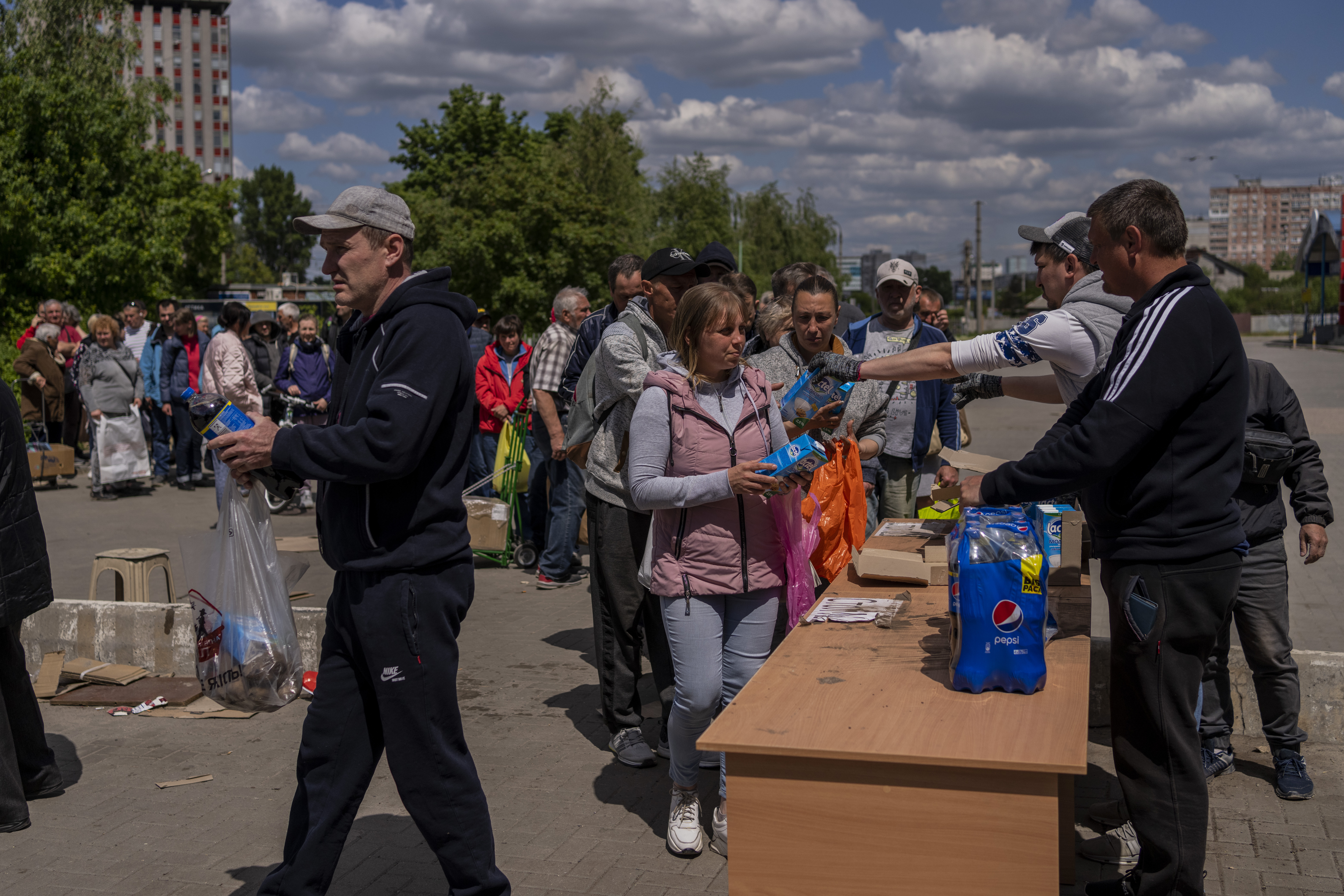 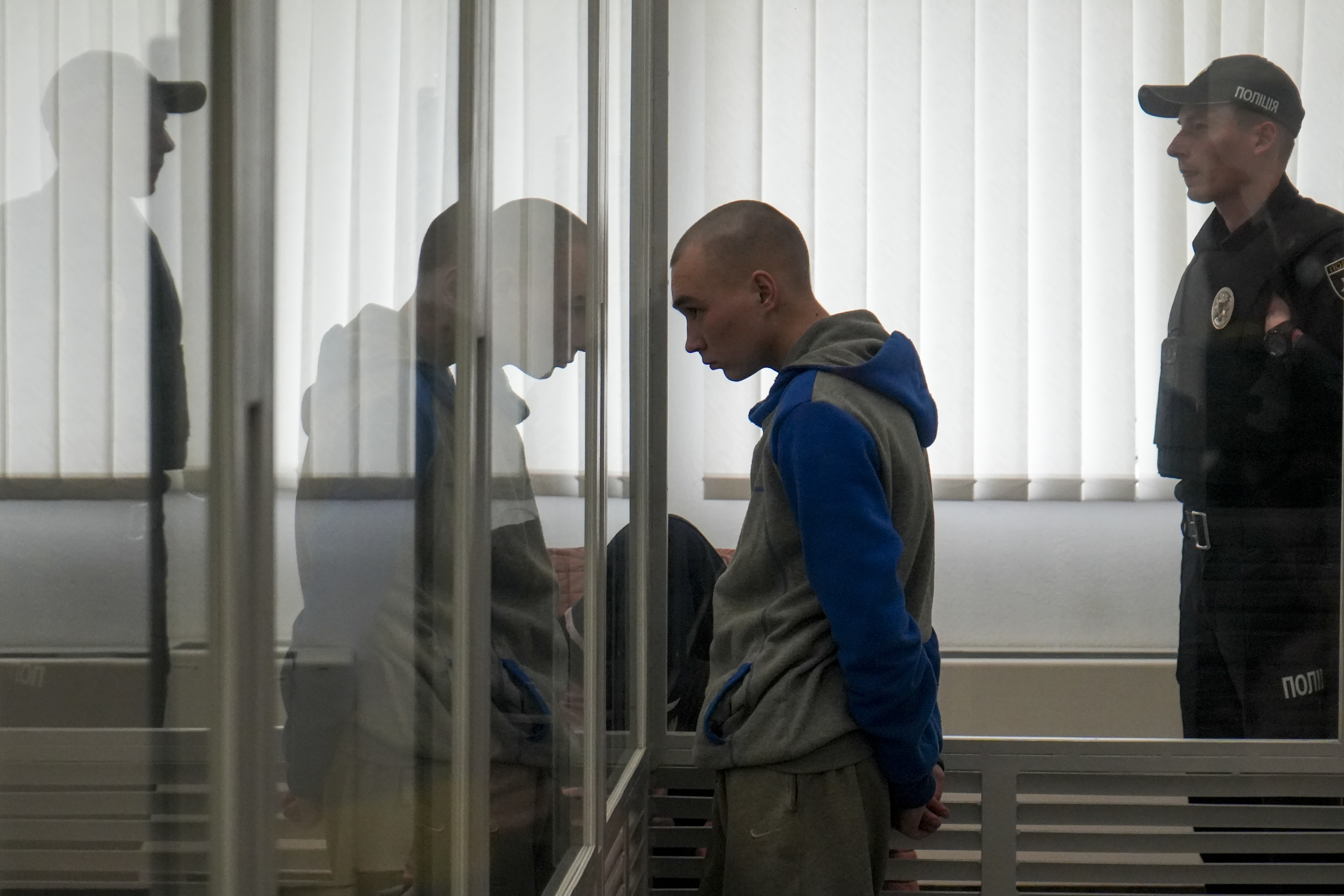 Russian Sgt. Vadim Shishimarin stands in court during a hearing in Kyiv, Ukraine, Thursday, May 19, 2022. The 21 year old Russian soldier facing the first war crimes trial since the start of the war in Ukraine testified Thursday that he shot a civilian on orders from two officers and pleaded for his victim's widow to forgive him. (AP Photo/Roman Hrytsyna)