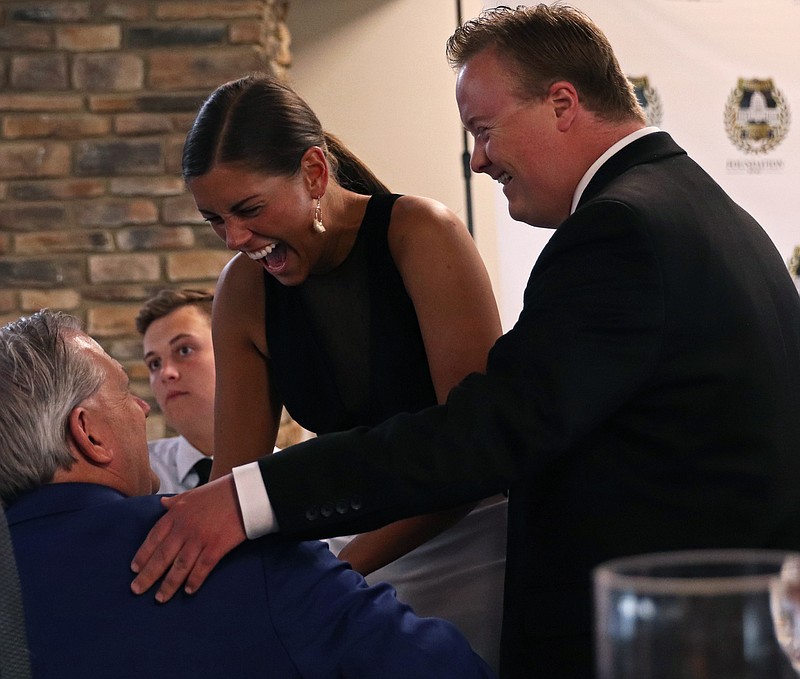 The Jefferson City Police Department on Thursday honored officers and staff who have gone above and beyond in their service to the community.

The Jefferson City Police Foundation Awards Banquet, which is expected to be held annually in the future, honored staff for their work over the past few years.

The foundation, which began operating last year, is a nonprofit charitable organization, founded by local business leaders to bolster the excellence of JCPD, help reduce crime and strengthen police services.

The foundation is comprised of a board of community members responsible for engaging other members of the community in direct support of JCPD. The board is citizen-led and independent from the direct control of the police department or city government.

Among those honored were the 911 operators who were on duty three years ago when a tornado hit Jefferson City.

Operators Anna Thomas, Jennifer Cain, Don McGovern, Heather Reven, Jessica Bohannan and supervisor Angie Stiefermann were on duty on the night of May 22, 2019. After receiving reports of the tornado causing heavy damage in Eldon and heading toward Jefferson City, 911 center personnel anticipated a dramatic increase in call volume.

Due to shift overlap, staffing in the center was at maximum; however, the volume of calls quickly inundated the Communications Center.

As the events unfolded, operator Meagen Schlitt and supervisor Erin Gabathuler self-deployed to the back-up communications center to assist in fielding calls.

For their dedication to duty and lifesaving efforts, the operators were awarded the JCPD Meritorious Service Award.

Receiving the JCPD Medal of Valor was Officer Dan Ervine.

On Oct. 3, 2017, at six minutes after midnight, officers were dispatched to 328 E. Dunklin St. in reference to a domestic disturbance. The female victim had fled her upstairs apartment and was in a downstairs apartment with a neighbor while the male suspect was outside the apartment beating on her door.

Officers learned the male suspect returned to his upstairs apartment. As they entered the foyer, Officer Ervine heard what sounded like the suspect readying a firearm, followed by him yelling, "Do you want to die?"

Officers withdrew and set up a perimeter. Ervine heard the suspect barricading the stairway to the second-floor apartment. The suspect then broke out his windows with a metal pipe while screaming, "Shoot me, shoot me!"

Moments later, the suspect came outside and charged at Ervine with the pipe. Ervine discharged his firearm to stop the assault by the suspect and other officers secured the suspect and began life-saving efforts.

On Jan. 3, 2021, Collins and Lehman responded to the 3500 block of Missouri Boulevard in reference to a disturbance involving a man standing in the parking lot, yelling and holding a large knife.

Officers tried to talk with the suspect from a safe distance, but he refused and became more upset.

Collins ordered the suspect to drop the knife, but the suspect held the knife high above his head and screamed while running directly at Collins.

Collins and Lehman discharged their firearms into the suspect. They then began life-saving efforts until paramedics could arrive.

Lehman earned another medal of valor, along with Officer Dawson Payne, for their actions June 7, 2021.

Lehman and Payne were patrolling in the 3700 block of West Truman Boulevard when they saw a vehicle with expired registration.

They conducted a traffic stop for the violation, and as Payne approached the vehicle on the passenger side, the driver pointed a rifle at him through the window.

Payne retreated and warned Lehman of the weapon.

Lehman and Payne drew their service weapons and began yelling commands for the male to drop the weapon. The male failed to comply and subsequently turned and pointed the gun at the officers.

Fearing for their safety and the safety of bystanders, Lehman and Payne discharged their firearms at the man.

Medal of Valor awards went to Officers Steve McReynolds and Jeremy Bowman for their actions Aug. 8, 2019.

McReynolds attempted to conduct a traffic stop on a vehicle that had been involved in a narcotics transaction. The driver failed to stop and a pursuit was initiated.

The driver fled north on U.S. 54 across the Missouri River Bridge, where Bowman joined in the pursuit.

The pursuit lasted approximately 15 minutes before the driver avoided one set of spike strips and ran over a second set, forcing him to slow down south of Fulton. Officers thought the driver was stopping to give up, but he jumped out of his vehicle and began firing a handgun at McReynolds and Bowman.

The officers exited their vehicles and took cover, but McReynolds' hand was hit by shrapnel.

McReynolds and Bowman returned fire as the suspect ran into a wooded area. The suspect was shot in the leg and other officers set up a perimeter to contain the suspect. As officers approached, the suspect turned the gun on himself and pulled the trigger. Officers on scene performed life-saving measures but were unable to revive the suspect.

Also getting awards of valor were Officers Dalton Brauch, Ryan Seymour and Desmond Wilson for their actions Oct. 10, 2021.

The three officers responded to the 500 block of East Elm Street for a reported structure fire. Upon their arrival, they saw flames and heavy smoke coming from the third floor of an apartment complex.

Witnesses on the scene said there were residents still inside so the officers ran to the second floor, pounding on doors to wake people.

Brauch and Seymour found an unlocked door and entered the apartment where the fire was located. There they found a mother and her six children still asleep. Brauch and Seymour woke the family and got them out.

Wilson stayed on the second- floor landing to direct people to safety.

Getting the JCPD Medal of Honor were officers Eddie Clark, Jeremy Kauffman and Tommy Barron for their actions March 18, 2017.

Clark, Kauffman, and Barron were dispatched to the report of a structure fire. They got on the scene to find flames coming from a second-floor apartment and entered to rescue anyone trapped inside.

Clark found a woman on the first floor, who said her boyfriend was in the back bedroom. Kauffman ran to the bedroom and got the man out as the woman ran out.

Clark then ran upstairs and found a man covered in soot and smoke. He grabbed the man and pulled him to the stairs.

Barron and Kauffman cleared the rest of the first floor and the basement.

The officers were dispatched to a domestic disturbance in the 300 block of North Lincoln Street during which it was reported a man had assaulted his mother and his girlfriend.

Upon their arrival, Schnakenberg and Market found the suspect in the street, waving two large butcher knives. He approached the officers, who drew their guns and aimed at the suspect, ordering him to drop the knives.

Schnakenberg and Market radioed for an officer with a Taser to come to the scene. Meanwhile, the suspect eventually cut his arm, severing an artery.

The suspect dropped the knives and came at Schnakenberg and Monroe arrived with a Taser, deploying it on the suspect who dropped to the ground.

Goetz arrived and applied a tourniquet to the 4-inch wound to the man's arm.

The final medal of valor awards were given to Sergeant Michael Ottolini and Detective Alex Clawson for their actions April 15, 2020.

JCPD officers were conducting an investigation related to ongoing drive-by shootings into homes.

A vehicle believed to be involved in the shootings was located, and officers tried to stop it to identify the driver and passenger. The vehicle failed to yield and a pursuit ensued.

Ottolini joined the pursuit, which continued through several neighborhoods for approximately nine minutes.

The driver and the passenger eventually exited the vehicle and fled on foot in the 500 block of East Atchison Street.

Clawson arrived on the scene to assist, and he and Ottolini pursued the passenger into a wooded area. Ottolini saw the suspect reaching into his waistband and believed that the suspect was reaching for a weapon.

Clawson jumped over a chain-link fence to tackle the passenger and take him to the ground. While attempting to handcuff the suspect, Clawson heard two gunshots and saw the muzzle blasts. Clawson saw the gun in the suspect's right hand, and pushed it away from him to prevent the suspect from shooting him again.

Clawson felt the suspect continue to resist and freed his shooting hand from Clawson's grasp.

Ottolini grabbed Clawson, pulled him out of the way, drew his firearm, and shot the suspect until he stopped moving.

Clawson was transported to Capital Region Medical Center for emergency treatment related to the two gunshots to his protective vest. The suspect died at the scene.