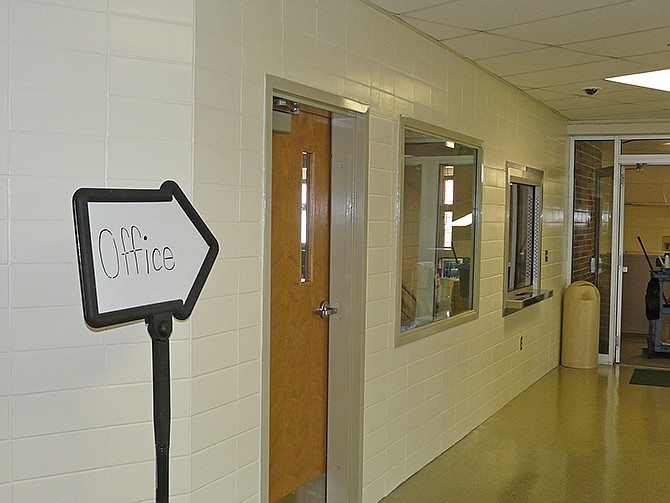 With a sign directing students and visitors to the new Blair Oaks High School office, this view shows the new entrance door and the two windows that allow the staff to monitor the hallways and the front door.

The Blair Oaks School Board will hear from the public about Board Policy 2115, which addresses issues pertaining to transgender students, at its regular board meeting in June, according to a Wednesday newsletter to parents.

The policy allows transgender students to choose a name and pronoun by which to be identified and dress according to their gender identity. It also allows all students to use restrooms that are gender-neutral, aligned with their "biological sex" or aligned with their "self-identified gender." It also outlines Missouri State High School Activities Association rules for transgender athletes.

The district had initially announced a meeting dedicated to the topic a week before its regularly scheduled meeting but decided to delay later due to "scheduling challenges."

The board will offer an "extended public comment" period at 6 p.m. Tuesday, June 14. The public comment period will take place in the intermediate school gym, and then the school board will move to the library for the regular meeting and any closed session discussion.

According to a district announcement from Board President Jason Paulsmeyer sent out to families May 12, the meeting will include up to an hour of public comment on the policy. Speakers can sign up on-site prior to the meeting and will each have three minutes to speak. The announcement also stated the board's attorney will attend and will present on the status of the law relating to the policy.

"The Board will then have a discussion about the policy in open session, and may also conduct a closed session to engage in confidential discussions with our Legal Counsel," the announcement states, adding any decisions on the policy would take place in open session.

The planned meeting comes on the heels of multiple community inquiries spurred by a recent letter to the editor, the first announcement states.

In a May 11 letter to the editor published in the News Tribune, Fred Forck wrote that the agenda for the November meeting in which the change was made included a line that said the board would review or approve revisions to its policies but did not include any direct mention of Policy 2115 or transgender students. Forck has been a vocal opponent of the policy and the way it was adopted at board meetings.

News Tribune's review of the November 2020 meeting agenda confirms although 'Revisions to Board Policies and Regulations' was an agenda item, Policy 2115 and its content were not specifically mentioned on the agenda.

The minutes of the November 2020 meeting said a revised version of Policy 2115 was unanimously adopted, with two members absent -- Tim Luebbering and Greg Russell.

"This policy has been in place since November of 2020 and was adopted in open session through the normal policy adoption process utilized by the District," a May 12 announcement from the district states.

Policy 2115 states the board is trying to "balance the privacy needs of all students with the preferences of transgender students and their parents/guardians."

It allows transgender students to select a first name and pronoun they would like to be addressed as by district staff. However, their birth name and sex will still be used on official school records.

The policy enables the district to designate "gender-neutral restroom(s)" upon request that will be available to any student.

"All students, regardless of their gender identity, will have the option of using the gender-neutral restroom, the restroom designated for their biological sex, or their self-identified gender," it states.

Policy 2115 also allows transgender students to dress consistently with their gender identity as long as it complies with the school's dress code.

On overnight trips for activities, room assignments must be sponsor-approved and agreed upon by student roommates, according to Policy 2115.

The clause addressing use of the bathrooms seems to have garnered the most attention.

In the May 12 announcement, Paulsmeyer addressed a "common question" from the public from the preceding days.

Another district communication dated May 12 said, "Since the policy's adoption, the District has received no complaints or concerns from students or parents of students regarding any safety incidents in any restroom regarding any student who identifies as transgender. At any time, if a student or parent wishes that their child utilize a private bathroom, that request will be granted. Students may wish to utilize a private bathroom, for example, if the student is transgender, has sensitive medical issues, or simply prefers the privacy of a private bathroom."

The board plans to hold its regular June meeting following the special meeting.