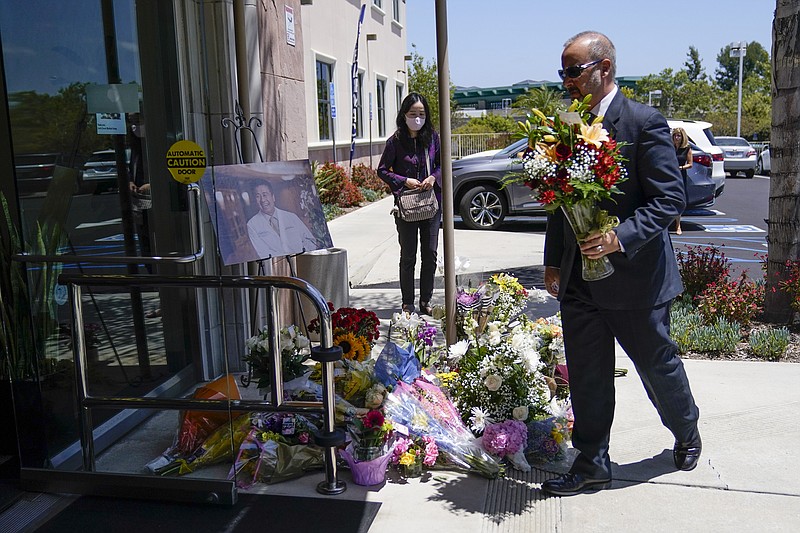 A man places flowers at a memorial honoring Dr. John Cheng sits outside his office building on Tuesday, May 17, 2022, in Aliso Viejo, Calif. Cheng, 52, was killed in Sunday's shooting at Geneva Presbyterian Church. (AP Photo/Ashley Landis)

SANTA ANA, Calif. (AP) -- The man accused of opening fire on a Taiwanese church congregation in California was charged Tuesday with first-degree murder and five counts of attempted murder for what a prosecutor called an effort to "execute" as many people as possible.

Orange County District Attorney Todd Spitzer also announced that David Chou, 68, of Las Vegas faces enhancements for "lying in wait" and use of a firearm, as well as four counts of possessing destructive devices with intent to kill or harm.

"We typically think of the person who hides in the bushes," Spitzer said. "This case is about the person concealing themselves in plain view."

Arraignment was expected Tuesday afternoon. Spitzer said he expected that public defenders will be appointed to represent Chou.

Authorities have said Chou -- a U.S. citizen who authorities say grew up in Taiwan -- was motivated by hatred of Taiwanese people. A federal hate crimes investigation is also ongoing.

If convicted as charged and the jury finds the enhancements to be true, Chou would face a sentence of either life in prison without possibility of parole or the death penalty, Spitzer said.

"While there's very strong evidence right now that this was motivated by hate, we want to make sure we have put together all the evidence that confirms that theory in the case," Spitzer said, when asked whether he would be filing charge of a hate crime.

Chou drove to Orange County on Saturday and the next day attended the luncheon. He spent about an hour mingling with about 40 attendees and then executed his plot, authorities said.

He chained the doors and put super glue in the keyholes, authorities said. He had two 9 mm handguns -- legally purchased years ago in Las Vegas -- and three bags, containing four Molotov-cocktail-type incendiary devices and extra ammunition. He opened fire and in the ensuing chaos Dr. John Cheng, 52, tackled him, allowing other parishioners to subdue him and tie him up with extension cords, authorities said.

Cheng died and five people were wounded, including an 86-year-old woman as well as four men, ages 66, 75, 82 and 92, the sheriff's department said. Authorities on Monday said two of the wounded were in good condition, two were in stable condition and the status of the fifth patient was undetermined.

At a news conference on Monday, Sheriff Don Barnes called Cheng's heroism "a meeting of good versus evil" that probably saved the lives "of upwards of dozens of people."

Johnny Stanton, a fullback for the Cleveland Browns and a native of Rancho Santa Margarita, Calif., wrote on Twitter on Tuesday that Cheng had been his primary care physician.

"Absolute hero," Stanton tweeted. 'He attacked the gunman and helped save so many in that church. I just wanted his name to be known. He will be missed."

Investigators are trying to determine if the church in Laguna Woods, a scenic coastal area whose population mainly consists of retirees and is near a large gated community, was a random target, Spitzer said.

"That population in general created a vulnerable environment for him to carry out what I think was his ultimate goal, which was to execute in cold blood as many people in that room as possible," he said.

Barnes said Chou's hatred toward Taiwan was documented in handwritten notes that authorities found. Chou's family apparently was among many forcibly removed from mainland China to Taiwan sometime after 1948, Spitzer said.

Chou had ties to an organization opposed to Taiwan's independence from China, according to Taiwanese media.

Tensions between China and Taiwan are at the highest in decades, with Beijing stepping up its military harassment by flying fighter jets toward the self-governing island. China has not ruled out force to reunify with Taiwan, which split from the mainland during a civil war in 1949.

Relations between mainlanders forced to flee a Communist takeover and native Taiwanese were frequently tense as the new arrivals crowded into slums and military communities. Separated by language and lifestyle, bullying and confrontation were frequent as President Chiang Kai-shek tightly restricted civil liberties under nearly four decades of martial law.

The Presbyterian Church is the most prominent of the Christian denominations in Taiwan and was closely identified with the pro-democracy movement during the martial law era and later with the Taiwan independence cause.

Jerry Chen, a longtime parishioner, said congregants had gathered for the luncheon after a morning service to welcome their former pastor, Billy Chang, who had served the church for 20 years. Chang moved back to Taiwan two years ago and this was his first time back stateside, Chen said.

Everyone had just finished lunch and were taking photos with Chang when Chen went into the kitchen. That's when he heard the gunshots.

Barnes said Cheng, a sports medicine doctor who is survived by a wife and two children, charged at the shooter and attempted to disarm him, allowing others to intervene. Chang hit the gunman on the head with a chair before other parishioners subdued him.

Balmore Orellana, a former neighbor, said Chou's life unraveled after his wife left him last year. Spitzer said the suspect's wife is terminally ill and in Taiwan. He could not say whether she was alive or had passed.

Before, Chou had been a pleasant man who used to own the Las Vegas apartment building where he lived until being evicted in February, Orellana told The Associated Press.

Records showed the four-unit property was sold last October for a little more than $500,000. Orellana said Chou's wife used the money from the sale to move to Taiwan.

Before Orellana moved in about five years ago, Chou suffered a head injury and other serious injuries in an attack by a tenant, the neighbor said. More recently his mental health declined and last summer a gun was fired inside Chou's apartment and the bullet entered Orellana's apartment, although nobody was hurt, Orellana said.

The shooting came a day after an 18-year-old man shot and killed 10 people in Buffalo, New York, in a racist rampage where the white gunman allegedly targeted a supermarket in a predominantly Black neighborhood.

Associated Press religion coverage receives support through the AP's collaboration with The Conversation US, with funding from Lilly Endowment Inc. The AP is solely responsible for this content. 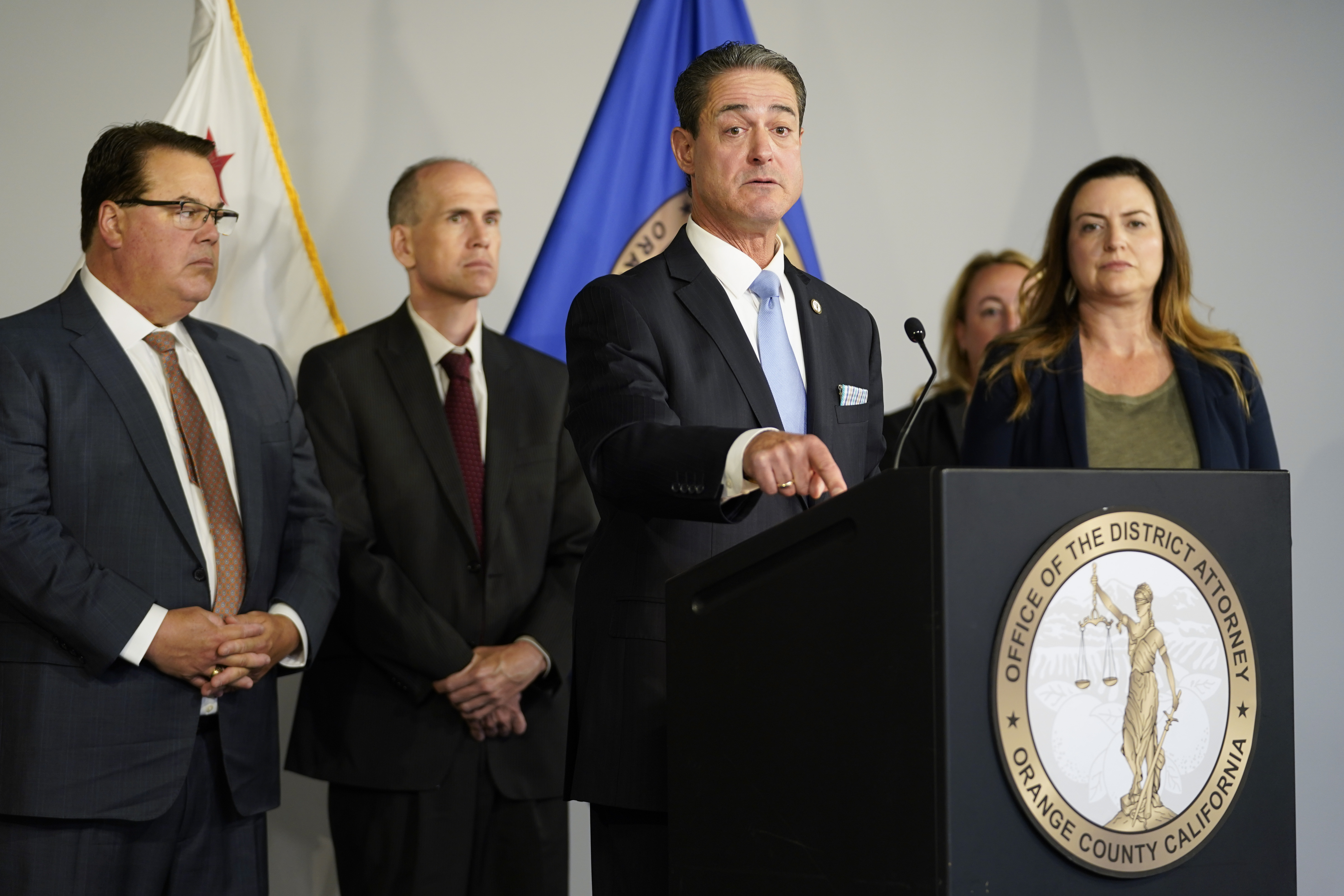 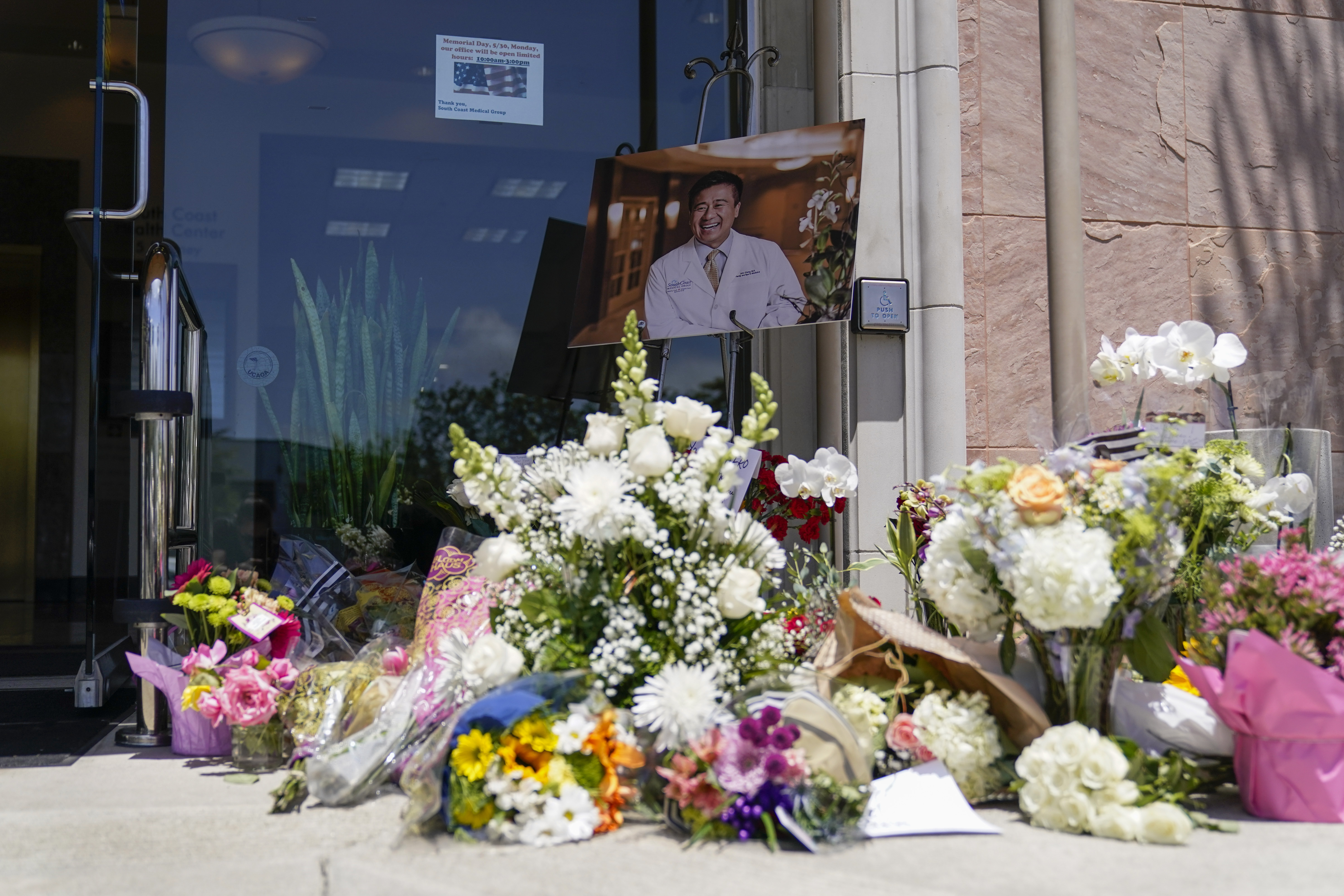 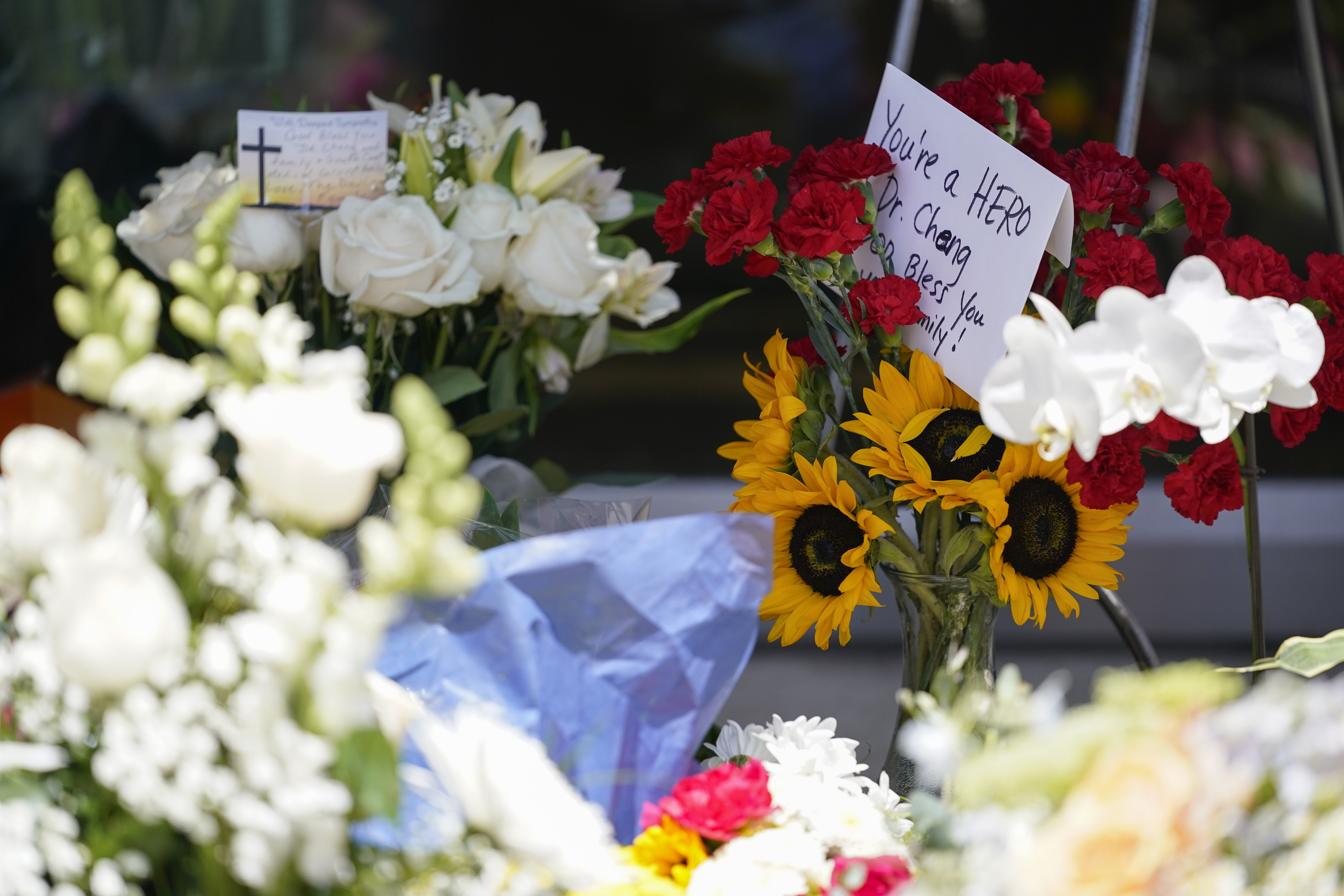 Flowers and cards are among a memorial honoring Dr. John Cheng outside his office building on Tuesday, May 17, 2022, in Aliso Viejo, Calif. Cheng, 52, was killed in Sunday's shooting at Geneva Presbyterian Church. (AP Photo/Ashley Landis) 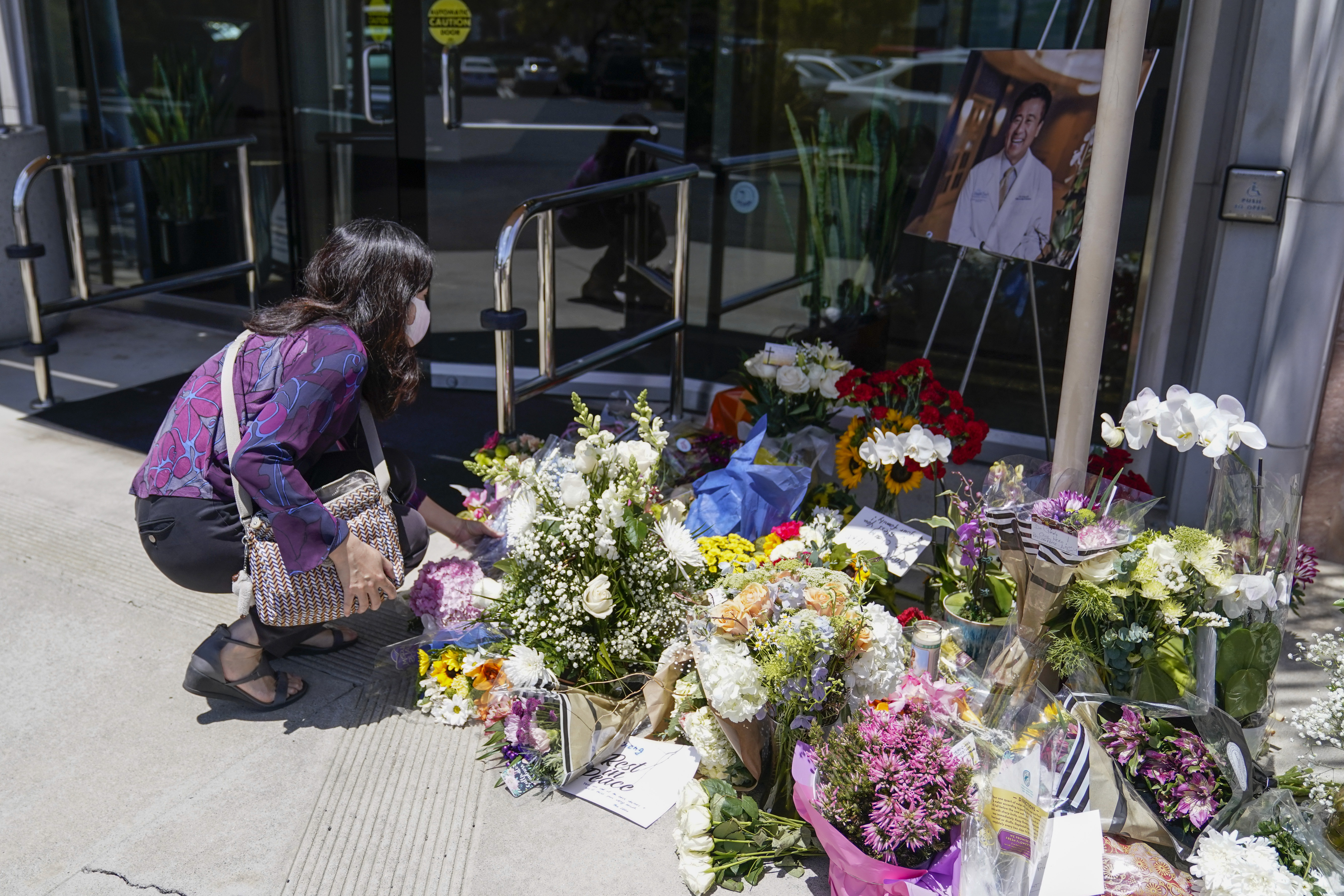 Grace Hung, a patient of Dr. John Cheng, places flowers at a memorial honoring him outside his office building on Tuesday, May 17, 2022, in Aliso Viejo, Calif. Cheng, 52, was killed in Sunday's shooting at Geneva Presbyterian Church. (AP Photo/Ashley Landis) 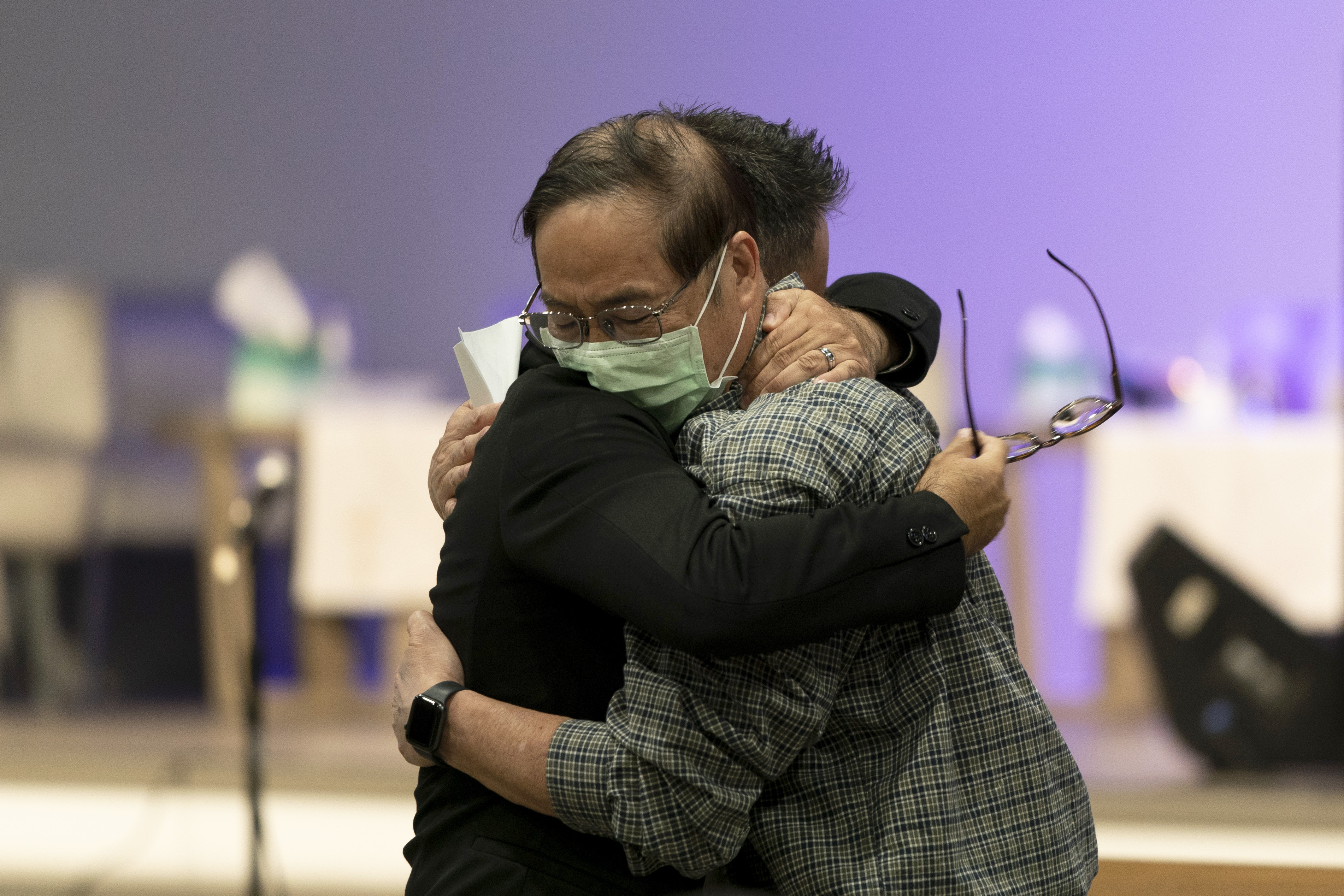 Jason Aguilar, left, a senior pastor at Arise Church, comforts Billy Chang, a 67-year-old Taiwanese pastor who survived Sunday's shooting at Geneva Presbyterian Church, during a prayer vigil in Irvine, Calif., Monday, May 16, 2022. Authorities say a Chinese-born gunman was motivated by hatred against Taiwan when he chained shut the doors of the church and hid firebombs before opening fire on a gathering of mainly of elderly Taiwanese parishioners. (AP Photo/Jae C. Hong) 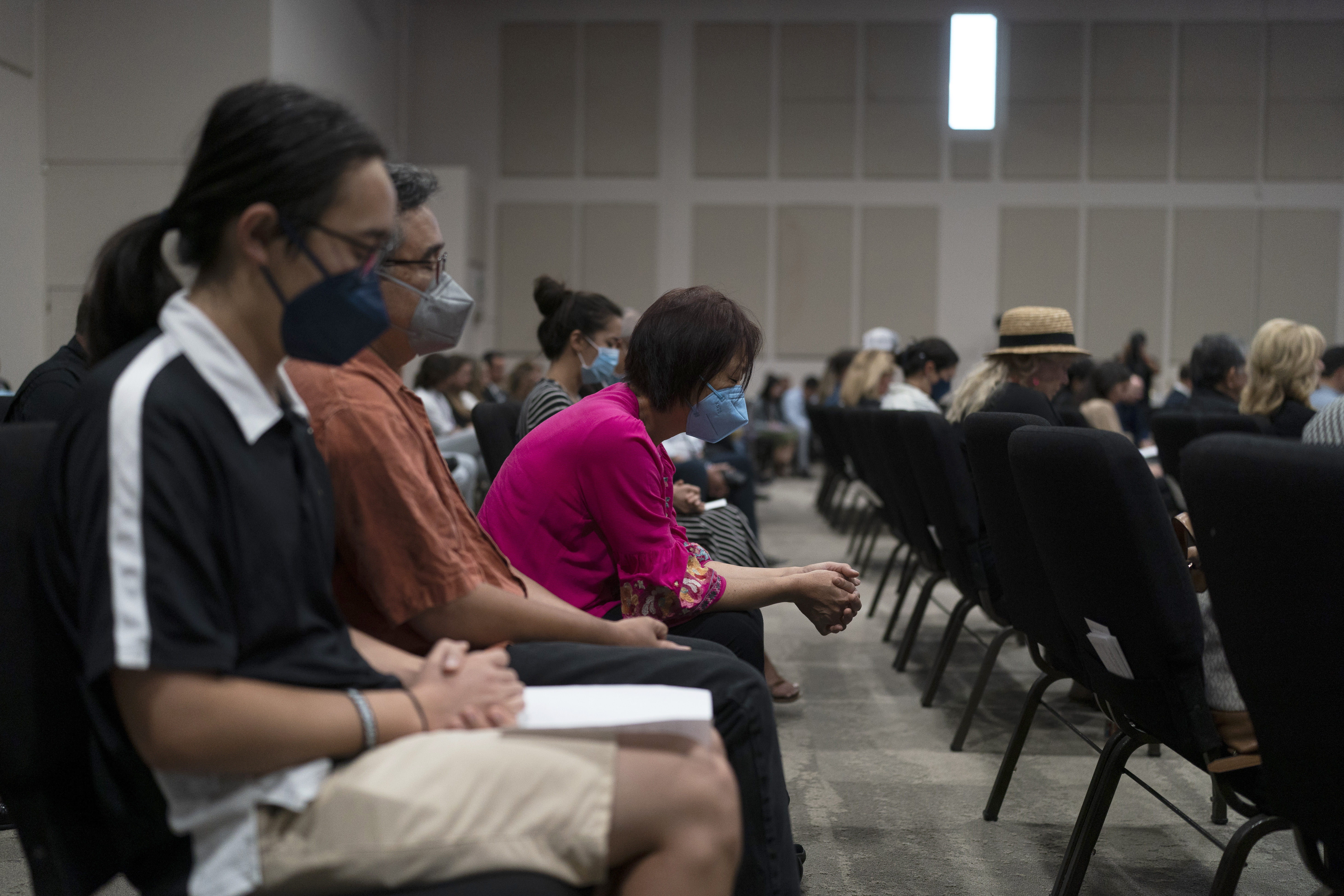 People pray during a prayer vigil in Irvine, Calif., Monday, May 16, 2022. The vigil was held to honor victims in Sunday's shooting at Geneva Presbyterian Church in Laguna Woods, Calif. Authorities say a Chinese-born gunman was motivated by hatred against Taiwan when he chained shut the doors of the California church and hid firebombs before shooting at a gathering of mainly of elderly Taiwanese parishioners. (AP Photo/Jae C. Hong) 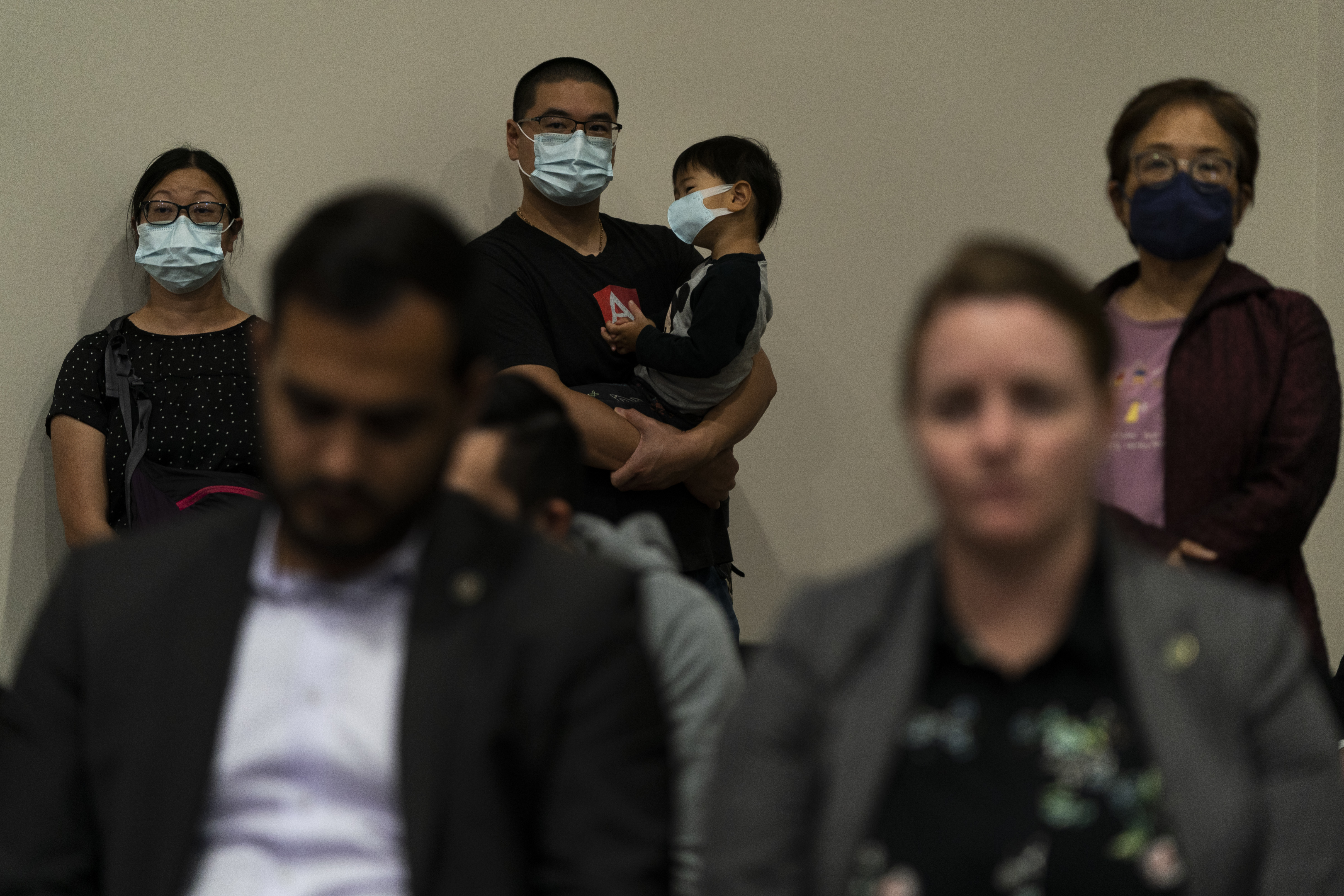 People listen to a speech during a prayer vigil in Irvine, Calif., Monday, May 16, 2022. The vigil was held to honor victims in Sunday's shooting at Geneva Presbyterian Church in Laguna Woods, Calif. Authorities say a Chinese-born gunman was motivated by hatred against Taiwan when he chained shut the doors of a California church and hid firebombs before shooting at a gathering of mainly of elderly Taiwanese parishioners. (AP Photo/Jae C. Hong) 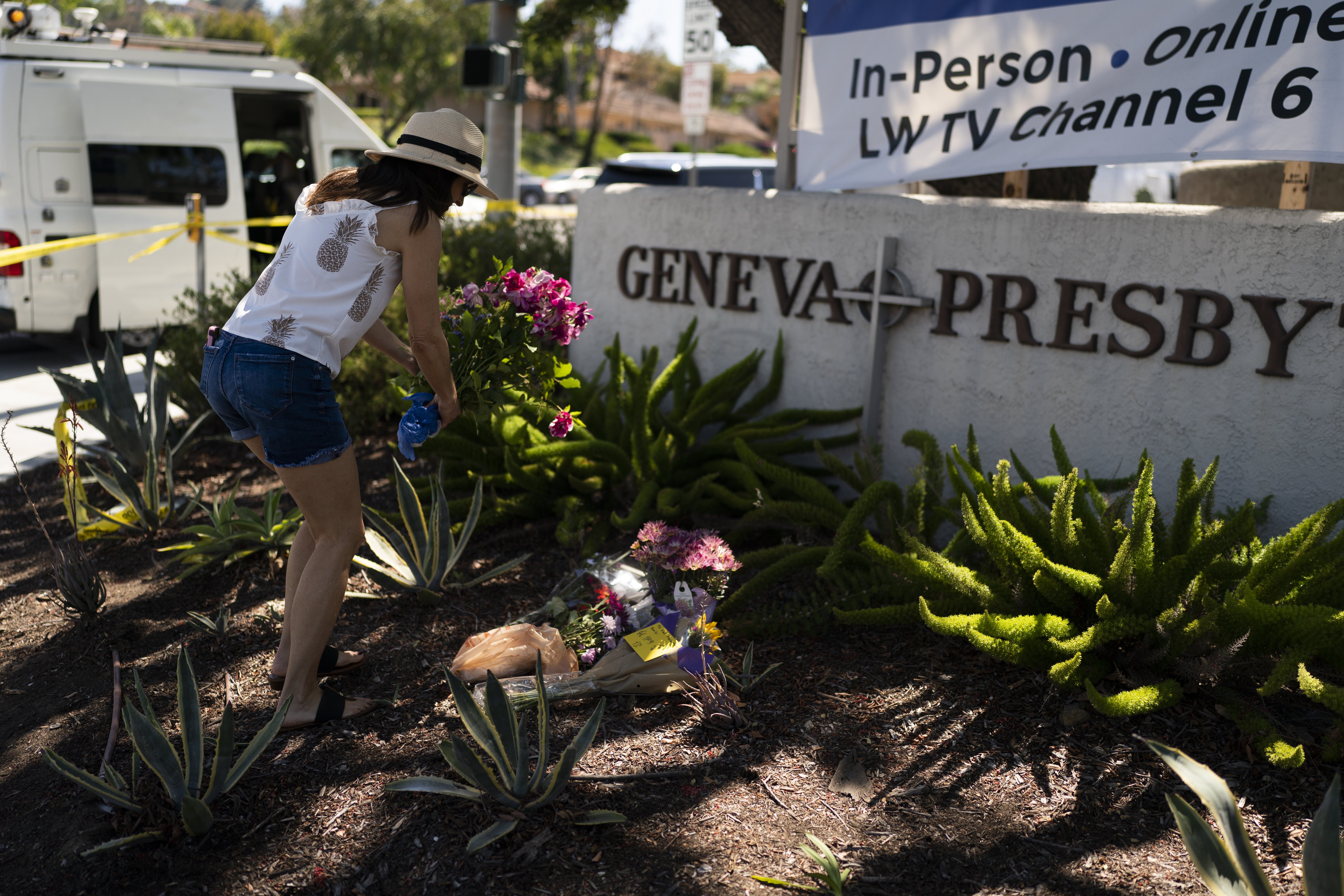 Joanna Garcia, 47, leaves flowers outside Geneva Presbyterian Church to honor victims in Sunday's shooting at the church in Laguna Woods, Calif., Monday, May 16, 2022. Authorities say a gunman in a deadly attack at the church was a Chinese immigrant motivated by hate for Taiwanese people. (AP Photo/Jae C. Hong)