Female pilots drawn to freedom of the sky 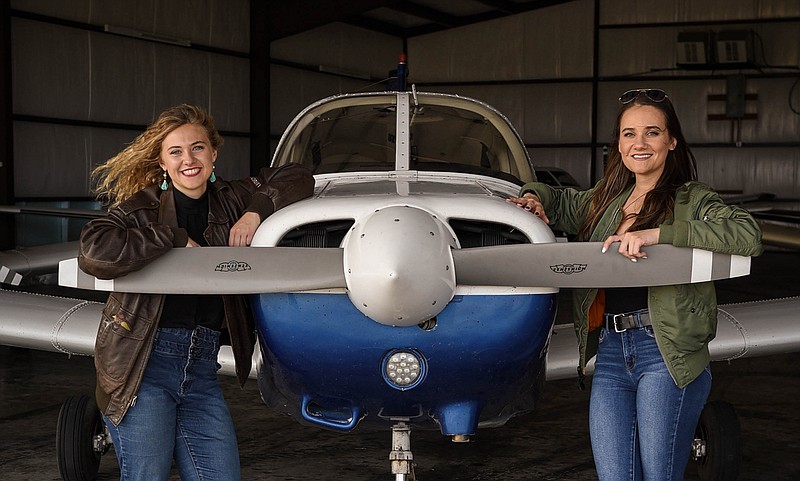 Certified flying instructors Lea Komaromi and Gabrielle Gibson pose in front of a Piper Warrior plane in a hangar at the Jefferson City Memorial Airport.

She wanted to fly.

“I wanted to feel the freedom of the air.”

“My world kind of changed,” the now 18-year-old certified flight instructor (CFI) said, reminiscing about her first flight lesson. “I had grown up on a farm for a long time. … I was a high school student who hadn’t seen much. So that day, being able to do something I always wanted to do was amazing.”

Nationwide, women make up only 9 percent of the total number of Federal Aviation Administration-certified pilots, according to 2021 data assembled by the FAA, and that number falls to 6 percent if student pilots are taken out of the equation.

“The fact that there’s another female CFI at my flight school is incredible,” Gabrielle Gibson, 24, said about Komaromi, her co-worker and fellow pilot, “and we’ve become the best of friends because of that despite age difference and different life experiences and vastly different backgrounds.” 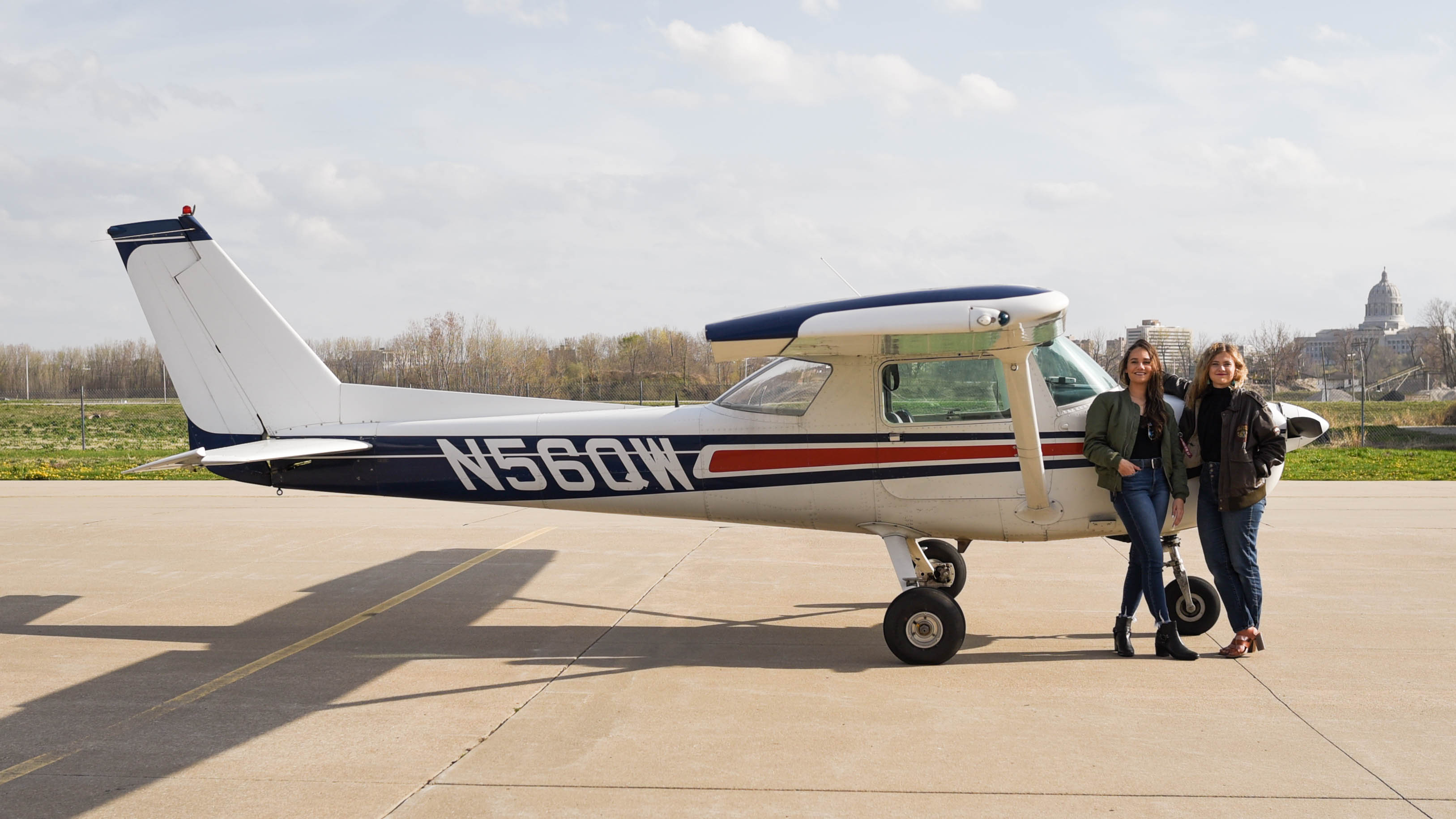 Gabrielle Gibson and Lea Komaromi pose in front of a Cessna 150 at the Jefferson City Memorial Airport.
By India Garrish

Putting in the work

Gibson was born in Las Vegas, moved to Northwest Missouri when she was 9 and then went to college in Utah. The daughter of a hobby pilot and collector of vintage aircraft, aviation has been a constant part of Gibson’s life — but it was never meant to be a career.

She majored in English, intending to be a teacher, but disliked the thought of staying put for too long.

The sky was calling.

Gibson came back to Missouri her last summer in college and started training to finish the 40 hours of flight time needed to get her General Aviation private license, something she started as a 16-year-old but put aside to travel. After college, she committed to further flight training in Jefferson City.

Komaromi, a home-schooled Jefferson City native, got her first small taste of flying — not off a deck, that is — in a C-130 flight simulator, thanks to a family friend in the Air Force.

“I got really nervous and excited and the sweats, kind of like when you see a cute boy,” she said. “And I was like, ‘I have to do this.’”

Tired of hearing her teenaged daughter constantly talk about wanting to fly, Komaromi’s mom called the Jefferson City airport to figure out their options.

They were looking for someone to wash planes; Komaromi jumped at the chance, especially since working at the airport gave her a discount on flying lessons. Seven days later, she took off for the first time.

“I think I was so excited about it that some of the memory is foggy, but I definitely remember that I loved it — from the first day.”

After getting their private licenses, Komaromi and Gibson eventually earned the 250 hours needed to become commercially-rated pilots, meaning they can be paid to fly.

Since they are still too inexperienced to work for an airline, newer pilots typically become CFIs to earn money while collecting hours to eventually take their aviation careers to the next height.

Gibson and Komaromi are also both instrument-rated pilots, meaning they’ve mastered the tools needed to be able to fly in low visibility and through clouds even when they may not be able to see out of the plane’s windows.

In addition to flight time, aspiring pilots need to learn about air traffic and the basics of airplane mechanics. After all, if something goes wrong while in flight, “there’s no pulling over in the air to figure it out or to call AAA,” Komaromi said.

“The world on the ground is outlined and mapped with roads and highway systems. Well, in the air, it’s the same thing; it’s just invisible so you have to memorize all these rules,” she said. “It’s governed by altitudes and speeds so you have to learn about the system of the air.” 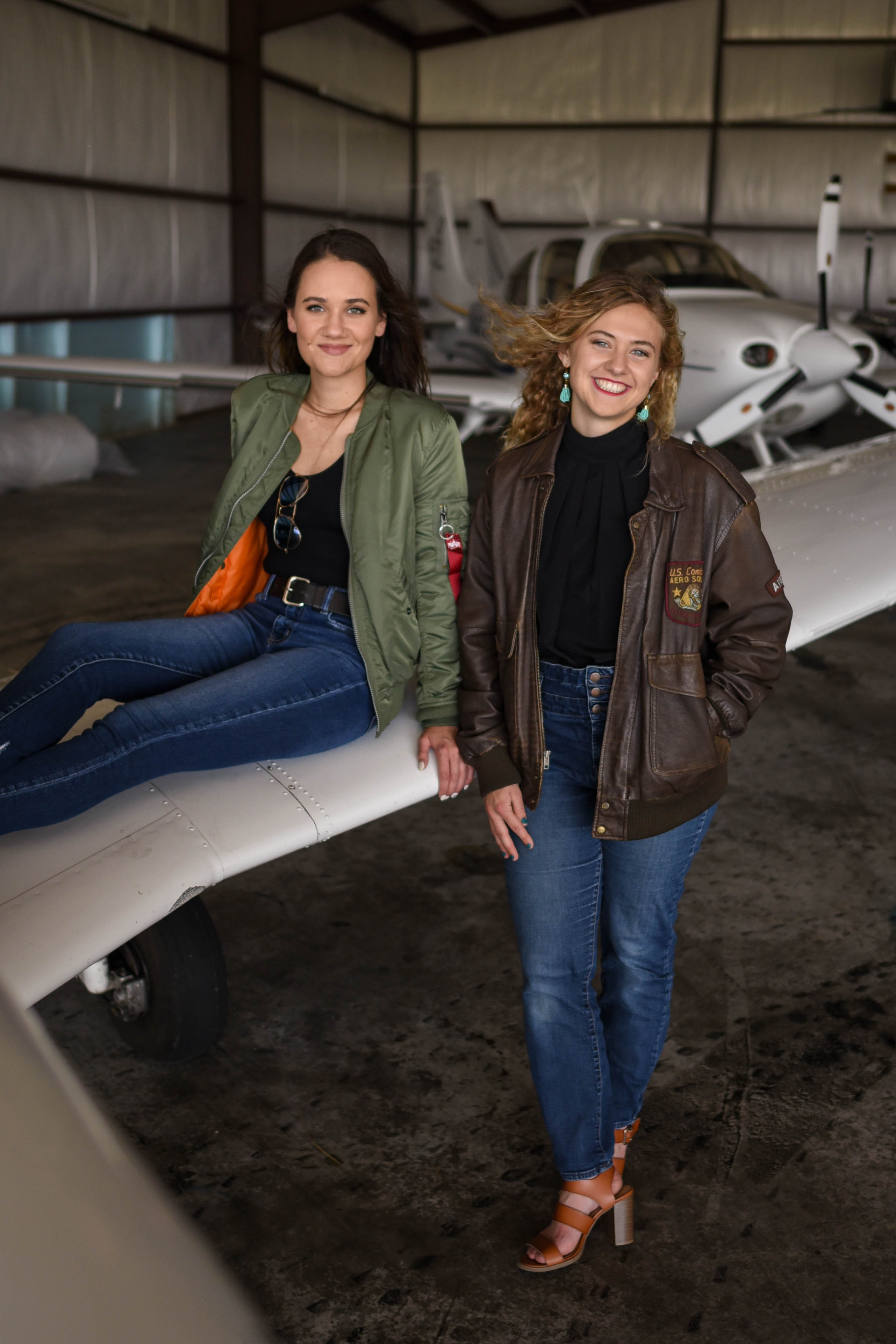 Lea Komaromi and Gabrielle Gibson sit on the wing of an Archer plane in a hangar at Jefferson City Memorial Airport.
By India Garrish

To boldly go up

To master the skills and confidence to, as Komaromi put it, “go in a tin can thousands of feet above the ground,” takes a certain amount of boldness.

And women in the male-dominated field of aviation, Gibson said, need to be even more bold.

“There’s a little bit of pressure as a female in the field. ... People are not expecting it,” she said.

While they said they’ve never encountered limitations because of their gender, Komaromi and Gibson noted aviation isn’t for the shy ones.

Komaromi — a self-proclaimed social butterfly who was “born with a lot of rebellion in me” — said the community at the Jefferson City airport has been incredibly helpful and welcoming, but she compared it to growing up with older siblings — constant joking and some teasing, but you secretly enjoy it.

Gibson — who grew up with older brothers and was active in martial arts when younger — agreed, adding her gender has been the subject of conversation, something her male counterparts likely don’t experience. It’s mostly well-meaning older men who learn of her pilot status and remark with an “oh, how cute,” not realizing being a pilot is her career, not just a part-time hobby.

“Again, being bold, I think that’s what lady aviators have to be. You have to be able to walk into a room filled with middle-aged men and be totally comfortable and know how to strike up a conversation and not be intimidated,” Gibson said.

“I had to get a lot more responsible really quickly — not only because there’s a lot of responsibility with flying airplanes in general but also to show I take it seriously being so young and a girl.”

The sky’s the limit

Gibson, who now has around 600 hours under her wings, is working on getting her multi-engine rating to be able to fly twin-propeller airplanes. The next goal, though, is to hit 1,500 hours, which she said will allow her to start applying for airlines. She’d like to fly cargo rather than people. She said it might come with stranger hours, but cargo planes, like those that fly for FedEx or Amazon, tend to offer more stability, especially considering the decrease in travel and increase in online shopping the pandemic has brought.

But her flight dreams don’t stop there.

Gibson, whose family is planning a move to Portugal as her parents retire, would like to work for a European airline based in Portugal or Spain. But the ultimate dream job would be to fly seaplanes that bounce between islands, maybe in the Bahamas or off the coast of Florida. Amphibious aircraft have been a favorite of hers since her childhood days spent with her dad at airshows across the country.

At around 350 flying hours, Komaromi plans to work in aviation in some form for the rest of her life — she’s considering work as a private pilot or for charter planes or maybe even flying in a branch of the National Guard. She graduates high school this month and plans to take the next year continuing to teach student pilots while banking hours in the air. A college degree is in her future someday; though right now, her sights are solely on the sky.

“Our world is huge into inspiration and great quotes, but whenever I was going through flying (lessons), it was hard learning all those things,” Komaromi said. “It was an emotional roller coaster. … Grit and fortitude was really what got me through a lot of it.”

Grit and fortitude were necessary, but the views and the exhilaration and the sense of freedom certainly helped — especially when you call yourself a romantic, like Komaromi.

‘It never gets old’

Komaromi admitted that during her first 20 or so hours of flying, she was a bit distracted because of the sheer beauty around her.

“It is very peaceful. It’s a lot of wonder. … It’s a different picture of seeing the world,” she said.

“Whenever I was having a rough day and my instructor and I would go for rides just for fun, I’d tell him, ‘The world looks so nice from up here. It doesn’t look as mean or hurtful; it just looks beautiful like it’s supposed to be.’ All the green grass and rivers and trees and people in their cars and you wonder where they’re going and what they’re doing ...”

Gibson agreed, adding the feeling of peace and freedom is one of the most attractive parts about aviation — it may not be the reason to enter the field, but it certainly keeps people coming back.

Though flying in circles above the airport with a student can get monotonous, it never loses its magic, Gibson said.

“Every single time I go up, I still get the first-flight feeling,” she said. “My heart feels like it’s going to burst out of my chest, and I get kind of breathless. It’s like a roller coaster excitement feeling. It never gets old. … For me, going flying is my peaceful place.”