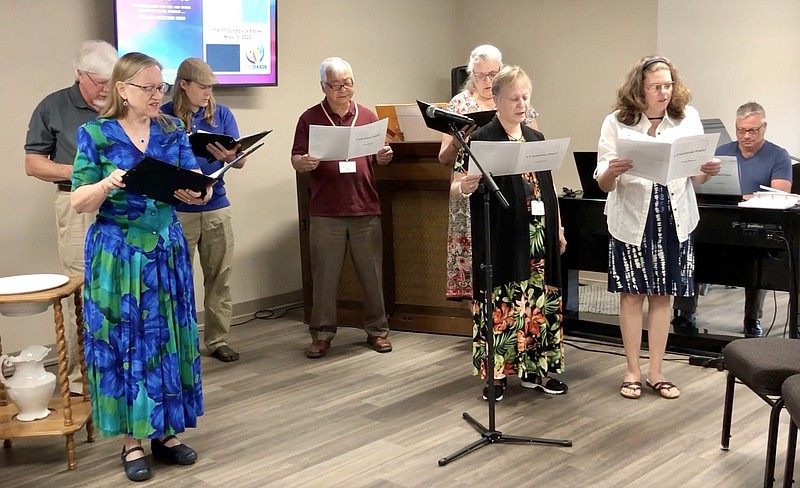 The singers will join members of choirs from across the nation to perform at Carnegie Hall under British composer and choral director John Rutter.

Rutter is to lead the New England Symphonic Ensemble, soloist Molly Quinn and the massed choir in his pieces "Requiem" and "A Ukrainian Prayer" during Memorial Day weekend.

Bill Lehman, music director at the church in Jefferson City, said in a news release participants are thrilled to have the opportunity to perform in a world famous hall under such a high-level, world-renowned choral composer and conductor.

A former choir director at the church had done the program before, said Nancy Luehrman, a high soprano, within the choir.

The former director met Rutter in Kansas City several years ago, and signed the church choir (which had been singing Rutter's Requiem periodically since about 1987) up for the program, she said.

The program is produced by a group known as MidAmerica Productions Inc., said Steve Price, a low bass within the local choir. MidAmerica does several things at Carnegie Hall, he said, including the annual Memorial Day Concert with John Rutter conducting his own pieces.

"Part of it has always been Requiem," Price said. "They do another part using various other numbers. This year is extra special. We are performing a brand new piece called A Ukrainian Prayer."

It's extra special, Price said, because most people in church choirs know Rutter's work. And because the Oasis choir was supposed to perform during the annual concert in 2020, but that was canceled. Then, it was supposed to happen in 2021, but that too failed to occur.

"Finally, it's going to happen this year," Price said.

"We think," piped in Luehrman. "We have our fingers crossed. We have our tickets."

There are seven singers (and four other people going along for the trip), who are headed to New York for the event.

The event includes about 13 choirs, some of which are quite large, Luehrman said. There will be about 200 people on stage.

The event, Price said, calls for each choir to choose its own dress for the performance -- from Jefferson City, men will wear black slacks and white shirts, women will be wearing black skirts and white blouses. Each will have pastel accessories.

The musical piece calls for at least seven (maybe eight) parts, but the local choir only has seven, she said.

The choir sings A Ukrainian prayer in English at home.

In New York, the choir is to sing the piece in Ukrainian -- Rutter wrote out the piece phonetically, so choirs may learn it in the second language.

"We thought it would be easier to learn it in English, and have the music down first," Luehrman said. "Then, we can always throw in the words. It's hard."

For some generations, singing at Carnegie Hall can be a life-long aspiration. The trip is also a chance for members of the choir to be tourists, do some sightseeing, and go to the Statue of Liberty.

"We're going to do as much as we can," Luehrman said.

Rehearsals are either mornings or afternoons. After the concert, performers will all take a dinner cruise of the harbor.