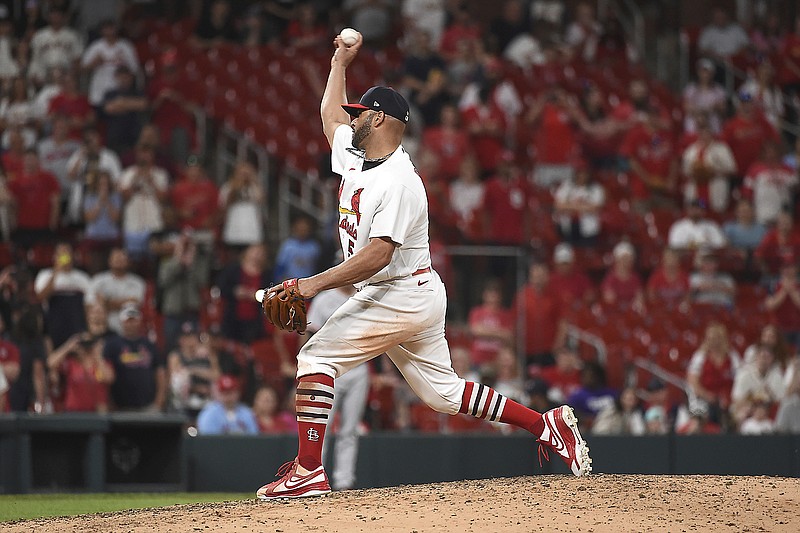 Albert Pujols of the Cardinals throws to the plate during the ninth inning of Sunday night’s game against the Giants at Busch Stadium. (Associated Press)

ST. LOUIS -- Albert Pujols had an absolute blast. And not at the plate this time, either.

The longtime slugger made his first career pitching appearance Sunday night, closing out a 15-6 blowout for the St. Louis Cardinals against the San Francisco Giants that gave Adam Wainwright and Yadier Molina the major league record for wins by a starting battery.

Molina homered and drove in four runs, Wainwright tossed six effective innings and St. Louis roughed up Carlos Rodón early. Paul Goldschmidt and Nolan Arenado each added a two-run homer for the Cardinals, who took two of three in the series after losing two of three to struggling Baltimore. Goldschmidt had three RBI.

Pujols, the Cardinals’ designated hitter, entered to pitch in the ninth inning for the first time in his 22-year career. He gave up a three-run homer to Luis Gonzalez and a solo shot to Joey Bart but managed to get the final three outs with plenty of margin to spare.

“A dream come true to say that I did it,” said Pujols, fifth on the career list with 681 home runs. “It was fun. It wasn’t fun giving up two bombs. I think the fans had a good time. I’m sure the guys that took me deep did, too.”

The 42-year-old Pujols became the oldest player to make his pitching debut since Lena Blackburne brought himself in at age 42 in his final game as a player/manager for the 1929 Chicago White Sox.

With the Cardinals ahead by 13 and the outcome all but decided, Pujols overheard manager Oliver Marmol asking for someone to throw the final inning so the team could avoid using another reliever.

He took plenty of good-natured ribbing from teammates.

“He’s got to keep the ball down,” Molina screamed in the locker room.

Pujols had an explanation.

“The thing is, I couldn’t even get it there. Every time I tried to keep it down, I was bouncing it,” he said.

LaMonte Wade Jr. grounded out against Pujols to end it.

Wainwright and Molina broke the major league mark with their 203rd victory as a starting battery. They passed Warren Spahn and Del Crandall, who amassed 202 wins for the Boston and Milwaukee Braves from 1949-63.

“It’s such an honor to be part of this record,” Molina said.

Wainwright and Molina were drenched in almond milk and soda by teammates in the clubhouse.

“It’s a blessing that I get to do this with him for as long as we have,” Wainwright said.

Joc Pederson hit a two-run homer for San Francisco, which lost its second in a row after winning six straight.

Molina capped a four-run outburst in the first inning off Rodón (4-2) with a two-run single. The 39-year-old catcher added a two-run homer off reliever Zack Littell in the fifth to make it 11-0.

Wainwright (4-3) gave up two runs and three hits. He struck out five and walked two. The 40-year-old right-hander retired 14 of the first 15 batters he faced. Gonzalez got the Giants’ first hit with a two-out single in the fifth.

Rodón allowed eight runs and 10 hits in 3⅔ innings. He had given up just seven earned runs in his previous six starts this season.

Every St. Louis starter had a hit by the sixth inning. Pujols was 2-for-3 at the plate with a double. He scored twice and drove in a run.

St. Louis outfielder Juan Yepez singled in the first inning. He has reached safely in each of his first 11 games, the longest streak by a Cardinals rookie since Luis Alicea went 23 successive games to begin his career in 1988.

The Cardinals were 0-4 in Sunday night games last year before winning in their first try this season.

Gonzalez came in from the outfield to pitch in the seventh with the bases loaded and two outs. He gave up a run-scoring single to Dylan Carlson before getting Harrison Bader to fly out.

“It was a good time, a wild night,” Gonzalez said. “That (homer) just capped off the night. Some pretty historic things happened to me in this game.”

Blackburne, a big league infielder from 1910-19, is better known for something besides that pitching cameo in his 40s: Years later, he took some muck from the Delaware River and developed Lena Blackburne Rubbing Mud, used throughout the majors and minors for seven decades to rub up new baseballs before games and make them easier to grip.

Notes: San Francisco RHP Yunior Marte was recalled from Triple-A Sacramento and gave up two earned runs in 1⅔ innings of relief. INF Donovan Walton was sent to Sacramento. … Cardinals RHP Alex Reyes has been shut down after experiencing more shoulder soreness. Reyes, sidelined all season, felt discomfort again while playing catch. He had an MRI last week and will remain inactive until the results are known. “Unsure if it’s the same area,” Marmol said. “But it is shoulder discomfort.” … Cardinals RHP Miles Mikolas (3-1, 1.49 ERA) faces the Mets in the opener of a four-game set tonight in New York -- though a storm is in the forecast. Mikolas has allowed two runs or fewer in all seven starts this season. The Mets had not announced a starter yet. … Giants LHP Alex Wood (3-2, 3.60 ERA) will face Colorado RHP Antonio Senzatela (2-2, 4.88) in the opener of a three-game series tonight at Coors Field. Wood did not allow an earned run in 5⅓ innings in a 9-2 win last Tuesday against the Rockies.