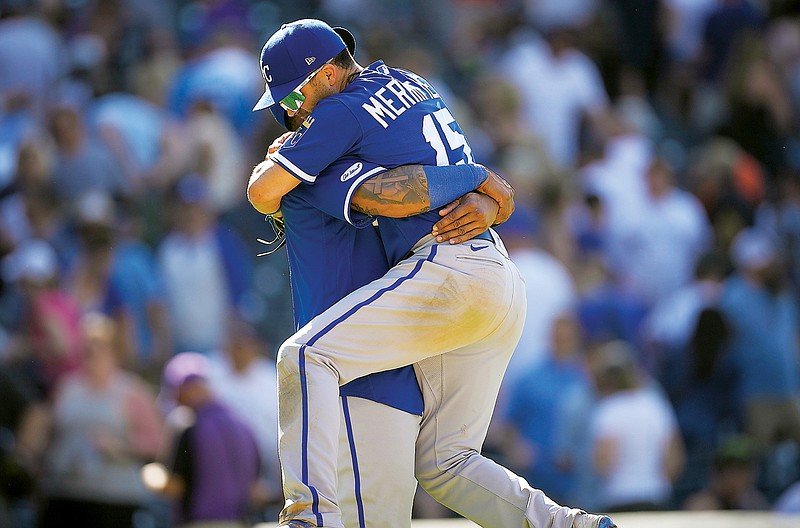 Royals second baseman Whit Merrifield jumps into the arms of Salvador Perez to celebrate after Sunday’s win against the Rockies in Denver. (Associated Press)

DENVER -- Salvador Perez hit a go-ahead, two-run single in the ninth inning and the Kansas City Royals recovered from blowing a six-run lead to beat the Colorado Rockies 8-7 on Sunday.

Bobby Witt Jr., Whit Merrifield and Emmanuel Rivera homered for the Royals, who took two of three from the Rockies.

Colorado overcame a 6-0 deficit by scoring seven times in the seventh.

Andrew Benintendi drew a leadoff walk from Rockies closer Daniel Bard (1-1) in the ninth and Ryan O’Hearn singled. A wild pitch and a one-out walk to Michael A. Taylor loaded the bases for Perez, who laced a single to left field.

“He’s got that clutch gene factor,” Witt said of Perez. “You kind of had a feeling he’s going to do something. Bases loaded, he just always stays calm, always same guy and just went up there did his job.”

Josh Staumont (1-0) pitched the eighth inning and Scott Barlow got three outs for his fourth save.

“Sum it up, I’d say it’s the best win of the year,” manager Mike Matheny said. “It could have been the worst loss of the year when you have a start like that.”

Colorado’s Yonathan Daza continued his hot stretch with two hits and sparked the seventh-inning rally. He has an eight-game hitting streak that has raised his average 28 points to .383.

“I felt like I had to try to mix really well because if they can get a comfortable swing off then there’s a better chance of damage happening,” Lynch said. “I didn’t really feel like I had great stuff today but I just tried to do my best to mix and try to keep them off balance.”

Rivera’s first homer of the season put Kansas City ahead 2-0 and Merrifield led off the sixth with his second of the season against Rockies starter Austin Gomber.

Gomber allowed three runs on four hits in six innings before giving way to Jhoulys Chacín to start the seventh. Witt greeted him with his third homer.

Rivera had an RBI double and then scored on a sacrifice fly to make it 6-0.

The lead was wiped out by Colorado’s big seventh inning against three relievers. Daza knocked in the first two with a single, C.J. Cron drove in another with a single and an error allowed a fourth run to score.

Randal Grichuk tied it with a single and Elías Díaz, who started the inning with a hit, put the Rockies ahead 7-6 with a sacrifice fly.

“You’ve just got to move on and try to win the next inning,” Witt said. “That inning’s over whenever the third out is made and so we kind of moved on from there.”

The Royals came into Denver looking to get their offense going after being shut out twice and held to one run two other times in the first half of May.

Kansas City put up 26 runs in the three-game series.

“We came on this road trip anticipating that we were going get some things going,” Matheny said. “One of the things was the offense. We saw the offense start to put some things together and some guys walking out of here with some confidence.”

Notes: Rockies OF Kris Bryant (back) is scheduled to play two rehab games with Triple-A Albuquerque this week and then be reevaluated with the hope he can return for the weekend series against the New York Mets. Bryant has not played since April 25 at Philadelphia. … Royals RHP Brad Keller (1-3, 2.70) will open a rare five-game series tonight against the Chicago White Sox. The teams play a split doubleheader Tuesday to make up the April 4 game postponed due to the lockout. … Rockies RHP Antonio Senzatela (2-2, 4.48) will make his second consecutive start tonight against San Francisco. Senzatela took the loss last Tuesday at the Giants.