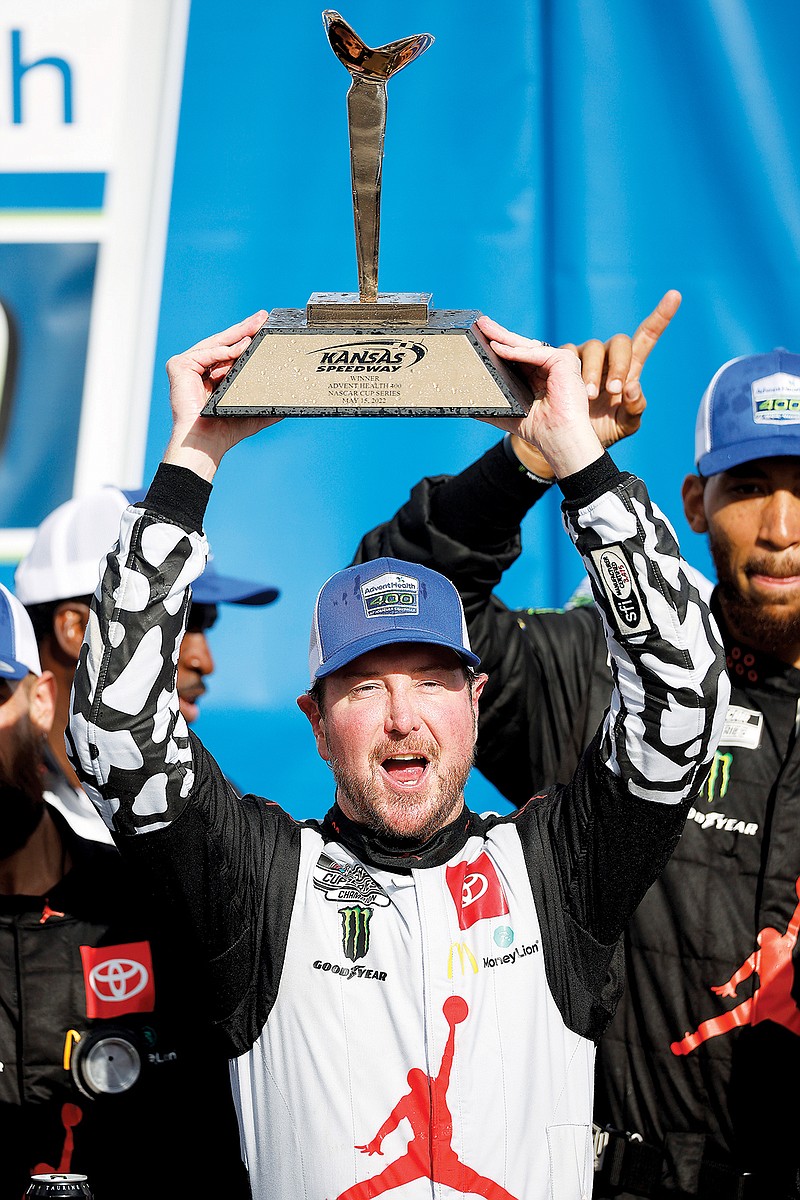 KANSAS CITY, Kan. -- Kurt Busch was slowly driving his Jordan Brand-styled ride toward victory lane Sunday at Kansas Speedway when car owner Denny Hamlin stopped him in his tracks, ducked his head through the window and said: “We did it.”

Busch survived a weary day of tire attrition, then pinched his way past Kyle Larson for the lead with eight laps to go, before driving away from the reigning NASCAR Cup Series champion to win for the first time at Kansas -- and give the up-and-coming 23XI Racing team owned by Hamlin and NBA great Michael Jordan its second win ever.

“That’s the most gratifying part, helping these guys win,” Busch said. “It’s all about team work. I don’t do this alone.”

Larson had the dominant car, riding the top line around the mile-and-a-half oval, but Busch was able to put his Toyota just about anywhere he wanted. That paid off when the two were side-by-side with eight to go and Busch squeezed by Larson, who brushed the wall and lost just enough momentum to surrender the lead -- and the win.

Busch pulled his No. 45 car -- one of the numbers Jordan wore during his career -- to a stop at the start-finish line and climbed out the window before throwing his arms up in triumph, the familiar Jumpman logo splashed across his fire suit.

It was the second win for 23XI after Bubba Wallace triumphed last year at Talladega, and it came at the most unexpected of times; neither of the team’s drivers had finished in the top 10 this season.

“You know, we as an organization kind of let these guys down -- I’m talking about Bubba and Kurt, all the mistakes we’d made on pit road and whatnot,” Hamlin said. “But lets talk about the positives. I can’t thank Kurt enough. The Jordan Brand’s first race, so jealous he gets to drive that car, and then to have that thing so fast there, yeah, it’s just -- I’ve never had this kind of feeling, even for a win for me, much less when I didn’t win. It’s different.”

There were no hard feelings about the way Busch raced to the finish, either.

“He never got into me. I’m trying to squeeze throttle to get position on him and just got tight,” Larson said. “That was fun racing with Kurt the last half of the race. I was trying hard the whole time.”

No kidding. At one point with 85 to go, Larson went nearly sideways while racing with Busch for the lead off Turn 2.

“Just hard racing for the win,” Larson said. “I was struggling in traffic a little bit, he was able to get by and from there. I just wanted to hold onto second. Just fought really hard today.”

One of the dominant storylines early in the week was how tires would fare under the Next Gen car during its Kansas debut, especially after several drivers -- including Joey Logano -- had problems with their rear going down in practice.

William Byron, who was bumped out of the way by Logano in last week’s contentious finish at Darlington, was running near the front when his tire went away. Just as Byron limped down pit road, outside pole sitter Tyler Reddick had a rear go down and touched the wall. Martin Truex Jr. had the same tire problem on the stage’s final lap.

“Our engineers were out talking to everyone who had issues in practice,” said Greg Stucker, Goodyear’s director of racing, who had advised teams prior to the weekend to increase rear air pressures to account for the loads.

“We wanted to make sure everyone was aware of the situation.”

Erik Jones had a different tire problem entirely: His team couldn’t get a rear lug nut off. It tried all manner of saws, torches and wrenches to no avail, a tough blow for a Petty GMS Motorsports team hanging outside the playoff fringe.

Kyle Busch, who earlier this week welcomed daughter Lennix Key into the world, managed to avoid the tire trouble and hold off Ross Chastain and Chase Elliott to win the first stage Sunday. His older brother, Kurt, beat him to the line to take the second stage with Elliott again coming across in third.

Then the same tire problem caught up to Elliott, whose rear went down and sent him spinning across the track with 70 laps to go. Elliott was fortunate to keep his No. 9 out of the wall before coming to rest in the muddy infield.

Kyle Busch had hoped to take home a trophy to his new baby girl, which he welcomed along with wife Samantha after a long and public battle with infertility. But despite a strong car all day, he wound up settling for third place.

Maybe her uncle can bring that trophy by sometime.

“I finally conquered this track,” Kurt Busch said. “I can’t believe it.”

Notes: Christopher Bell parlayed his third pole of the season into a fifth-place finish. Truex bounced back from his tire issue to finish sixth with Chastain, Ricky Stenhouse Jr., Alex Bowman and Wallace rounding out the top 10. … Josh Bilicki had the colors of the Ukrainian flag on his No. 77 car for Spire Motorsports to show support of humanitarian efforts going on in the war-torn country. … The series takes a regular-season break before the Coca-Cola 600 and heads to Texas for next weekend’s All-Star race.