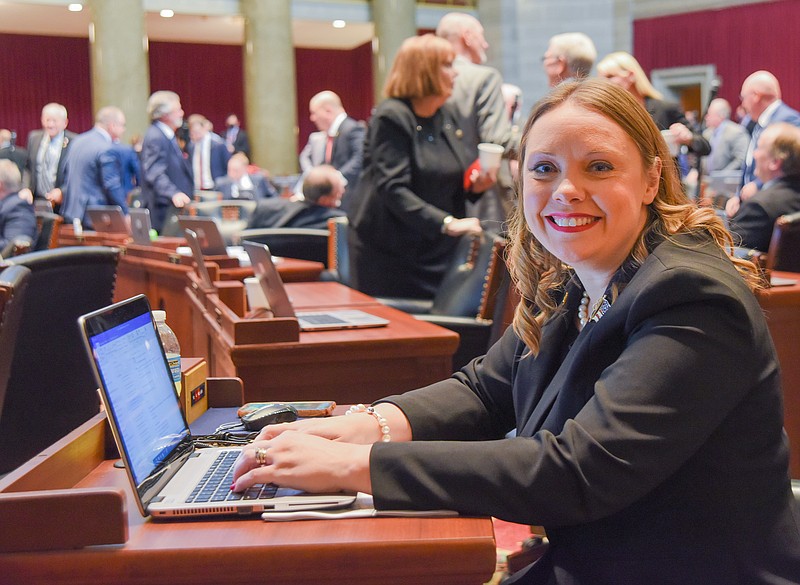 State Rep. Sara Walsh, R-Ashland, is shown at the conclusion of Wednesday's opening session of Missouri's 101st General Assembly. Walsh, whose husband Steve Walsh died in August of 2021, is back in the Capitol carrying out her duties as an elected representative. (Julie Smith/News Tribune photo)

Rep. Sara Walsh, R-Ashland, said Friday she'll be looking at her options, and will soon announce her election plans.

Walsh, who won her state House of Representatives seat in a special election five years ago, launched a campaign earlier this year to take the place of U.S. Rep. Vicky Hartzler, who is stepping away from her seat to run for U.S. Senate.

The comparisons between the women are keen, Walsh said -- both are very conservative pro-life Republicans. Both began their state political careers in the Missouri House of Representatives.

But recently passed congressional districts now place her in the district held by U.S. Rep.Blaine Luetkemeyer, a Republican from St. Elizabeth.

And, the seat she holds in the Missouri House now leans 54 percent Democrat, Walsh said.

On Friday, Walsh said she had a number of achievements to be proud of.

"It's been such an honor to be able to be here at a time when we did pass one of the strongest pieces, if not the strongest piece, of pro-life legislation in the nation several years ago," Walsh said. "Getting to vote for that bill -- it was an incredible time to be down here."

Walsh pointed out that she has filed numerous pieces of pro-life legislation over her tenure, including this year's House Bill 1593, which mandates that any child born alive during or after an abortion shall have the same rights, privileges and immunities as any other resident of Missouri.

Unfortunately, Walsh said, the Missouri Senate adjourned early and didn't get it across the finish line.

In an era of term limits, that's where others will come after a lawmaker and pick up the torch to move it forward, she said.

Being able to get the Back the Blue license plate across the finish line several years ago was another achievement Walsh relishes.

There are now more than 50,000 of the plates issued across the state, she said.

They've raised about $51,000, which will go toward preserving the Missouri Law Enforcement Memorial.

"I was out there a week ago, when they had the candlelight vigil, and got to talk to officers from around the state who have the plate on their cars," Walsh said. "They talked about how much that plate means to them."

So, she said, the plates are accomplishing what they were intended to do -- encouraging men and women in law enforcement.

"It lets them know we support them and thank them for their services out there," Walsh said.

Walsh was given the privilege of making some personal remarks on the House floor Thursday. She thanked Republican leadership (both current and past) who encouraged her to vote her conscience for her constituents, and for supporting her Back the Blue program.

She was grateful for appointments to multiple committees (including six last year, two of which she chaired).

Walsh also thanked the Republican Caucus for electing her to be the caucus chair.

She closed by reminding other members of the chamber that her prayers are with them.

During the final hours the Missouri Senate was in session, Majority Floor Leader Caleb Rowden, R-Columbia, set aside time for departing senators to give remarks.

Sen. Jeanie Riddle, R-Mokane, was elected to the Missouri Senate in 2014 after serving six years in the House. When she arrived in the Senate, Riddle was the only female Republican. Leaving the body eight years later because of term limits, she's leaving behind five others.

Among her accomplishments, Riddle said working on a children's book with the 10 other female senators in the chamber was "pretty amazing." It was a unifying experience, Riddle said, as she worked across the aisle with some colleagues she once considered "frenemies."

"It was a life-changer for me," Riddle said. "Very much so, just to be able to have that camaraderie."

Riddle said the women in the Missouri Senate brought back a taste of old Missouri politics this session -- times when Republican and Democratic state lawmakers used to share meals and put issues aside to enjoy each other's company for an evening.

Riddle said her years in the General Assembly have given her friends in every corner of the state, people who would lend a helping hand to get her "back on the road again" no matter where she is.

Legislators, like everyone else, experience trauma in their lives, Riddle said, and she went through a lot. Riddle's brother died while she was in office, then her father, mother and dog. She also had several surgeries and fought illness.

"And you all were amazing," Riddle said as she fought back tears on the Senate floor. "And your prayers were much appreciated."

Her time in the statehouse was also marked by personal triumphs, too, she said, like the birth of her five grandchildren.

Riddle said she never had any real plans to become a politician, but it was an honor beyond her wildest dreams to serve her constituents at the Capitol.

"It still is thrilling to get to drive up and look at the dome and think, 'My gosh, we get to work here,'" she said. "It's really awesome."

Rowden, who also served with Riddle in the House, thanked her for the kindness and compassion she showed him while serving the state together.

"Well, I tried mommin' you a number of times, and I've noticed the hairstyle for you has changed," Riddle said to Rowden.

"Yeah, you don't -- you're very quick to say that my adult hairstyle, you didn't appreciate," Rowden replied with a laugh. "You didn't really like it that much."

"I kind of like that spiky hair," Riddle decided. "I get it."

Riddle urged her legislative colleagues to carry on and maintain love and respect throughout the building.

"To my friends that I've made that have become my family of choice: Thank you for walking through life with me," Riddle said. "Some days are great to celebrate and some have been hard, and I don't know where I would be if it weren't for the Capitol family. Thank you."

Rep. Travis Fitzwater, R-Holts Summit, who is leaving because he is term-limited from seeking his office again, said on the floor before leaving for the last time that he was fortunate to represent local communities, and that he could go home at night and put his daughters to bed.

Fitzwater, who is running for Riddle's seat in the state Senate, discussed the importance of his first bill, which focused on muscular sclerosis awareness. He said he entered the chamber as a freshman with Rep. Rob Vescovo, R-Arnold, whom few, including Fitzwater, would have foreseen becoming House speaker.

"You've proven a lot of people wrong over and over again," Fitzwater said.

Vescovo had demonstrated to his enemies, friends, family and community that there were no hurdles he couldn't overcome.

"Nobody works harder to achieve things than you," Fitzwater said.

"I think it is helpful to us to have humility," he said. "When you think you're really important, when you're told in the halls how funny you are or how a big deal you are -- we really are not. We're just a mist -- that's something I tried to fashion my principle nature behind."