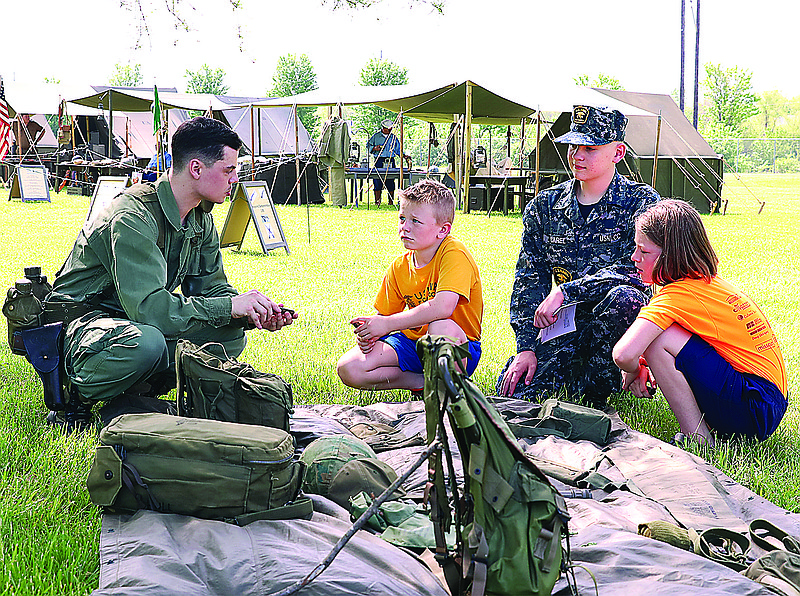 Re-enactors show the public what life was like in the Vietnam Era on May 14, 2022, at the Museum of Missouri Military History, in Jefferson City. Left to right, Austin Grant, Kenny Schulte (7), Mason Carel and Jazmyne Schulte (9) look at military equipment. (Kate Cassady/News Tribune photo)

People dressed for combat were set up in historic- style camps with tents and canopies, surrounded by all kinds of weapons and historical military artifacts.

The re-enactors camped out at the Museum of Missouri Military History all day Saturday as people walked by to view their displays. They taught people about the history of wars from the 1800s all the way through to World War II and the Vietnam War era.

The goal of this inaugural event is to illuminate what life was like in a historic military camp, Museum of Missouri Military History Director Charles Machon said.

"What we're trying to do is show what camp life was like in various historic military camps from the Civil War, World War I, Korea, World War II and Vietnam," he said.

People don't often think about or get to see the more mundane parts of military life, so some re-enactors suggested an event to showcase that.

"In movies, they're always running around and having battles, but you have to set up camp somewhere," he said. "That's something the public doesn't always get to see -- the behind-the-scenes of being a soldier."

The event continues 10 a.m.-4 p.m. today at 2405 Logistics Road. It is free to attend, but adults are required to show a driver's license to enter.

Despite the heat, more than 1,000 people attended the event Saturday, Machon said.

"We're very happy with that, and I have to say, the turnout for the participants, the re-enactors, is our largest turnout," he said. "We're very fortunate to have that happen, so this has been a good day."

"They said, 'Why don't you do Australia?' No one does Australia. You would really be something different out there," Godi said. "Next thing you know, we're getting members together, and everybody's getting their Australian kits, and here we are."

His favorite part, he said, is telling stories he's learned about the Australians in World War I and II and educating people about what happened, as there's a lot of misinformation out there.

"I've got a love of history, so I like telling people what really happened and what the Australians did," he said. "Unfortunately, way too many people come up to us and say, 'I didn't know the Australians even fought in World War II.'"

In addition to re-enactors and camp displays, there was a weapons demonstration, numerous military vehicles on site and presentations by local historians on various military history topics in the museum's C-130 Hercules aircraft.

The event features various presentations in the museum's storage space, including: information on how to find information on a Missouri service-member using the Missouri State Archives; a look at the Enigma machine, which Germans used to code information during WWII; and details on Lincoln University's Tuskegee Airmen, a group of Black airmen and pilots during WWII.

Machon said he hopes to have this event every May to commemorate Memorial Day. For more information, visit the museum's Facebook page.

Print Headline: Re-enactors give public a behind-the-scenes look at being a soldier