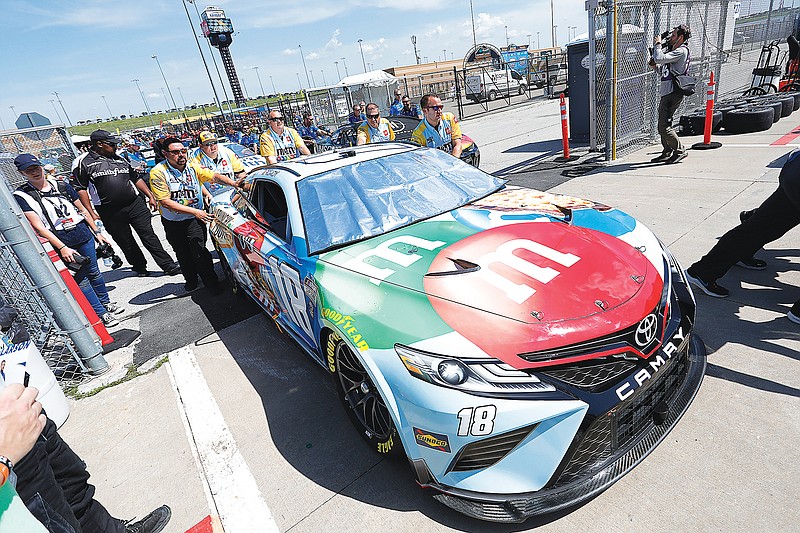 Kyle Busch's No. 18 car is pushed to the track by crew members before a practice run Saturday for a NASCAR Cup Series race at Kansas Speedway in Kansas City, Kan. (Associated Press)

It didn’t take long for Busch’s week to get a whole lot better.

Two days later, Busch and his wife, Samantha, welcomed their baby daughter after years spent dealing with infertility. Lennix Key was born by surrogate, making their soon-to-be 7-year-old son Brexton a big brother, and putting everything else in proper perspective -- as if Busch needed any help in that respect.

His rollercoaster week could certainly end on a high today given his performance at Kansas lately.

What was once a mile-and-a-half of heartbreak, where Busch was just as likely to crash in practice as reach the finish line in one piece, has become one of his favorite places. He has 11 top-10 finishes and two wins in his last 14 trips to Kansas, and he’s the defending winner of last year’s regular-season race just west of downtown Kansas City.

Hard to believe Busch once crashed out of three straight races there.

“Even the last few times before we won there we had some really strong runs,” Busch said. “We finished in the top five, I think, five races in a row, and we have also been in the top 10 a lot, so it’s a place where we’ve really picked it up, and now we have two wins there. We seemed to have gotten a setup or ahold of that place.”

In other words, it’s a good place to go after Darlington, where Busch led 18 laps and was near the front most of the day.

Then came the moment Keselowski blew his tire and hit the wall, collecting Busch in the wreck, and damaging his No. 18 Joe Gibbs Racing car so severely he had to limp it down pit road. Rather than take it all the way to the garage, though, Busch parked it and walked away, forcing NASCAR to close pit road until it could be moved.

Busch said later he didn’t think it mattered, and he couldn’t have made the turn to the garage anyway. But the move was nonetheless criticized by NASCAR analyst Clint Bowyer and others for its seemingly immature nature.

That finish aside, things at the track have been good for Busch lately. He won a month ago on the Bristol dirt to clinch a playoff spot, finished third at Talladega and led the most laps a couple of weeks ago at Dover.

Things have been good on the home front, too, where Busch is learning at long last to be a father of two.

“It’s been great. I’m just really thankful for all the blessings that we’ve had over the years, struggles and trying to get where we are today,” he said. “It’s really meaningful to be able to welcome home our baby girl. Lennix is doing well. Mom is adjusting and doing well. Working on that man-to-man coverage with children. I’m sure that’s going to change as she gets older but enjoying every moment of it thus far.”

Notes: Kyle Larson is the betting favorite for Sunday’s race at 6-1, according to FanDuel Sportsbook, after winning at Kansas in October on his way to a Cup Series championship. Hendrick Motorsports teammate Chase Elliott along with Denny Hamlin of Joe Gibbs Racing are 7-1 while Ross Chastain is 8-1 to win for the third time this season. … Hendrick Motorsports will try to make it 3-for-3 in the Next Gen car at mile-and-a-half tracks this weekend. Alex Bowman won earlier this season at Las Vegas while William Byron triumphed at Atlanta. … Joey Logano, last week’s winner at Darlington, crashed near the end of Saturday’s practice. The wreck came after Logano’s car chief was ejected and he lost his pit selection for twice failing inspection. … Kevin Harvick, who was fourth at Darlington, hopes to parlay his Kansas dominance into his first win since Bristol on Sept. 19, 2020. He’s been second in two of his last three races at the track, and has four consecutive top-5 runs, while his three wins at Kansas are tied with Hamlin, Logano, Jimmie Johnson and Jeff Gordon for the most in history. … Logano became the 10th driver through the first 12 races to clinch one of 16 playoff spots when he spun William Byron into the wall on the penultimate lap to win last weekend. That means the pressure is mounting for Harvick, Tyler Reddick and anyone else without a win at the halfway point of the regular season. “I think that’s what NASCAR has put together with this playoff system — that wins mean so much and you do what it takes when it comes down to it,” Austin Dillon said. “I think everybody’s organizations would be upset if they didn’t.”