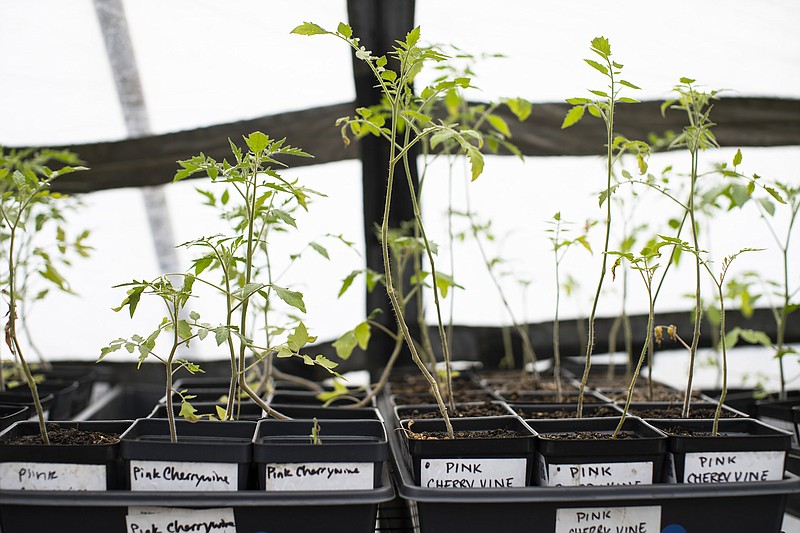 CHICAGO -- To Bob Zeni, a perfectly round and perfectly red store-bought tomato is something to look at, but not to touch. In fact, Zeni hasn't purchased a tomato since 1990. He grows his own heirloom tomatoes to avoid buying what he calls "tasteless travesties" or "red water balloons."

"Gardening itself is very satisfying and certainly enjoyable," Zeni said. "Seeing the way it looks is beautiful."

For more than a decade, Zeni has followed the same routine.

In February, he began planting tomatoes at his La Grange, Illinois, home. Wherever a window was in sight, a table holding a pot of budding heirlooms sat right next to it. In March, he moved his plants to his portable backyard greenhouse. Zeni's daughter, Rebecca, and several neighbors helped him set up what looks like a clear plastic tent equipped with space heaters. By April, the tomato plants would be ready for sale.

But that was until 2019 because like his heirloom tomato plants, Zeni's business continued to grow until there was no more space in his home or driveway.

Now Zeni, who was dubbed the "Chicago Tomato Man" by his daughter, has more than 4,000 heirloom tomato plants in a greenhouse that stretches as far as a city block. Inside are more than 100 varieties of the fruit, ranging from big red beefsteak tomatoes to dark and smooth Black Beauty tomatoes, and vibrant yellow Golden Grape tomatoes that can brighten up any salad.

Starting this past Martin Luther King Jr. Day, Zeni started working alongside Gardeneers volunteers in their spacious greenhouses. Gardeneers is a nonprofit organization that uses school garden programs to teach students about nature, nutrition, how to cultivate fresh fruits and vegetables, and how help the planet at a local level.

Adam Zmick, CEO of Gardeneers, said Zeni's planting is aligned with what the organization does and is a way to better support school gardens.

"How it works is that a team of garden educators visit our 16 schools at least once a week to get students hands on in the garden," Zmick said. "(Zeni) needs a lot of hands to do all this stuff so we are able to contribute and we can earn some income to help support our school gardens."

This year, each tomato plant costs $6, with more than three of those dollars going to Gardeneers.

"They are putting in a lot of the time and the effort," Zeni said. "They deserve it."

Between April and May, his customers pick up their pre-orders from several different locations throughout the city.

And some of Zeni's customers have walked away with more than just a tomato plant.

One father has been able to teach his children about harvesting. A mother and daughter duo are strengthening their bond by using their green thumbs to contribute to a community church in Northbrook. And everyone who has purchased a tomato plant from Zeni also has the opportunity to share the taste of a fresh heirloom and create new recipes.

"When people pick it up, it's gratifying because people are giddy with excitement," Zeni said.

Selmaan Ansari, one of Zeni's customers, has purchased tomatoes from him for the past three years. A neighbor who knew Ansari was looking to put together a garden suggested he check out the wide variety the Tomato Man was offering. It excited Ansari to find someone who was local.

"Every year, I get about six to eight plants from him," Ansari said. "I have young kids, and they get to see them grow so when it's time to harvest they ask questions and want to be the ones to pick the tomatoes off."

For Monica Dim, a beginner gardener, this is the second year she is purchasing from Zeni. She and her mother, Colette Dim, contribute to the St. Giles Episcopal Church community garden in Northbrook.

Colette Dim said she has been involved with the community garden for 14 growing seasons. There are 30 10-by-10 gardening plots.

"Anyone who gardens with us donates to the Northfield pantry and some of the pantries in Evanston," Colette said. "I said to Monica, 'Let's get our tomatoes together,' so we decided to go headlong and get a dozen tomato plants each for last year."

Though this is Monica's second year purchasing tomatoes, it is her first year getting the full gardening experience.

"I was nine months pregnant when I first bought my tomato plants from him so I had a good amount of questions and wasn't able to do a lot of the planting myself," she said. "When you are able to grow and share your own tomatoes, it's very exciting and he made that possible for me."

But some of his newer customers are confused or disappointed when they first see their tomato plant. For Zeni, it's an opportunity for a teachable moment.

"I get complaints from initial buyers because I give them this plant and it's really tall and it's kinda skinny and it's kinda bushy and they say, 'Well, there's something wrong with this plant," Zeni said. "I tell them no, just bury the bottom third, and it will blossom; don't worry about it."

Zeni stays engaged with his customers months after the sale. He takes phone calls to answer any questions, and asks for photos to check on the growth process because he can empathize with the frustrations his customers face.

"Tomatoes are full of moisture and juice and they need the water," Zeni said. "The other thing is if you drown it and then forget about it for two weeks, the core of the tomato grows faster than the shell of the tomato so what happens is that the core breaks the shell and that's when you get the mold at the top."

For Zeni, the key to growing a ripe tomato is finding the proper balance of heat, light, water, along with tender, loving care. He admitted it took close to 20 years before finding success.

"Every year I failed and every year I learned from that," Zeni said. "There's a lot of frustration with it from having too much water or enough water, too much heat, not enough heat and trying to sell these things."

This year was no different.

"I always lose about 15 to 20% and this year, despite our best efforts, we did lose 20%," Zeni said. "One of the shelves had fallen over so that killed a whole bunch of them and then in March we moved them over to the greenhouse thinking there was heat and there wasn't so that killed several others as well."

Facing these difficulties not only makes Zeni feel like a more knowledgeable gardener. The unexpected twists and turns also help the tomatoes become more resilient.

"It has not been warm, it has not been sunny and there has been far too much rain, so the plants are struggling, but that's not a bad thing," Zeni said. "You need to harden off tomatoes meaning you have to expose them to variations of temperatures, which strengthens their stem."

The frustrations pay off, however, because he gets to experiment with new varieties of heirloom tomatoes each year.

"When the word heirloom is applied to growing fruits and vegetables it means created using non-GMO, open pollinated techniques," Zeni said. "It's not the common definition of being old. As oxymoronic as it sounds, there are new heirlooms."

This year Zeni is growing a tomato from seeds given to him by a Norridge customer last year. The customer said the seeds were from his wife's grandfather, who had been saving seeds from Calabria, Italy, every year for 100 years.

"I was honored that he would think of me," Zeni said. "He didn't have a name for it so we named it Art Zaino's Centenarian."

Art Zanio was the grandfather's name and to Zeni's knowledge, he is the only one selling that particular variety.

When not doing business, Zeni enjoys a quiet night eating a plate of fresh pasta with his wife, Wendy, who cans the tomatoes.

"We take it out in the winter and she makes a secret spaghetti sauce that she learned from her mother," Zeni said. "It's fresher, it tastes great and it's better than the store." 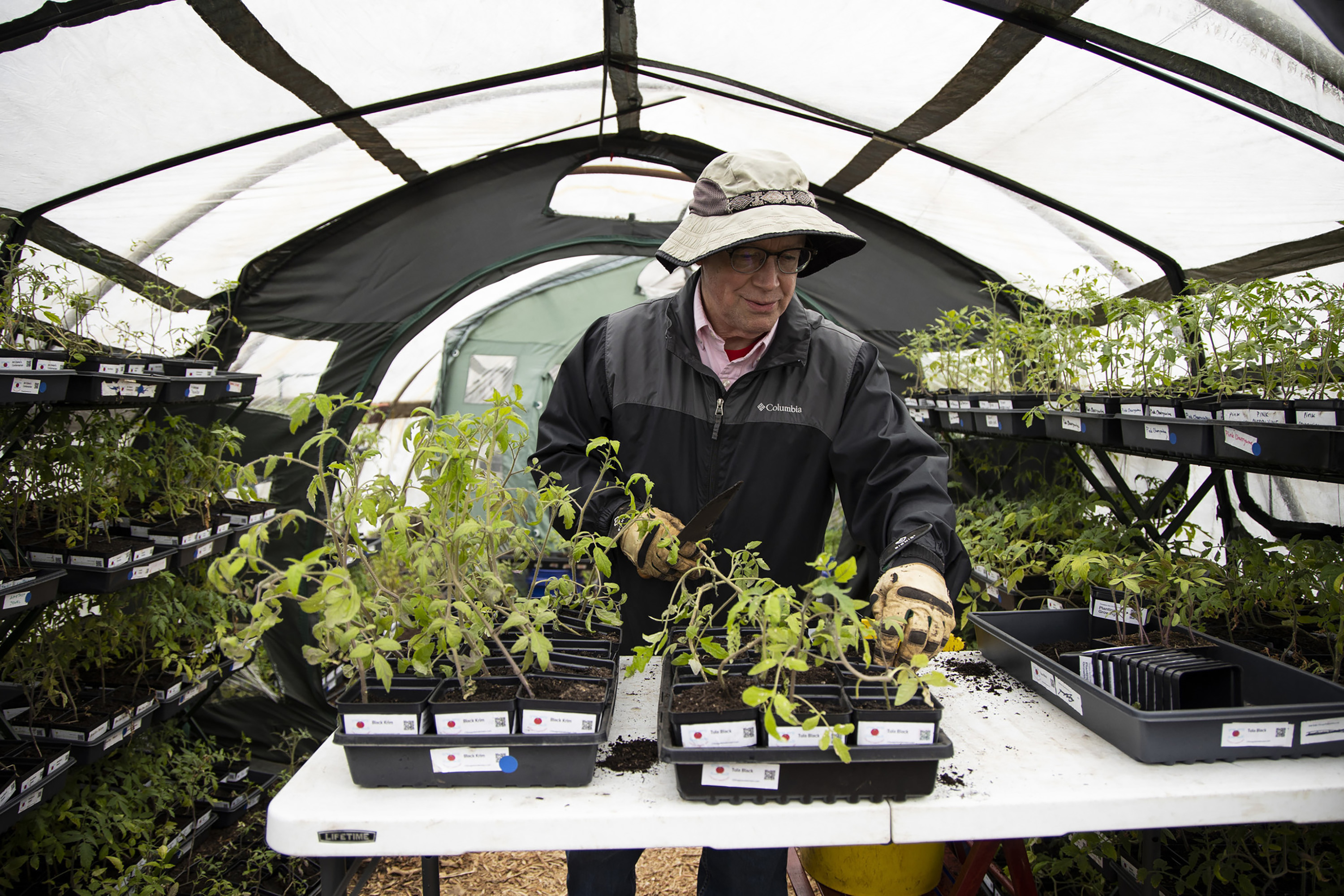 Print Headline: Chicago’s Tomato Man on mission to help others rethink the plant by offering more than 100 varieties of heirloom tomatoes