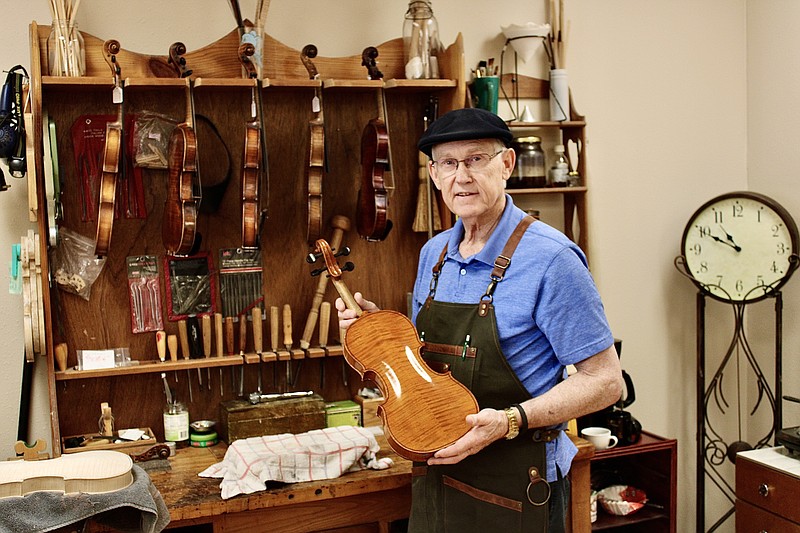 Jerry Field poses with a violin he is working on at Field and Morrison Music on May 13, 2022. (Cameron Gerber/News Tribune).

As Field and Morrison Music opens in a new retail space, Jerry Field's emphasis remains on the legacy and craftsmanship he has focused on for decades.

Field has been in the violin repair business for decades, having discovered his passion for the violin and repair began when he first purchased a used instrument at age 27 and instantly fell in love with the music and the art that goes into producing such beautiful sounds. Despite growing up in a musical family, he said the violin was the one instrument he wasn't around very much before that purchase.

"I went to have a repair done, and I was totally mesmerized by his shop," Field said. "I thought, 'Oh man, I could do this.' And that was the beginning."

From there, he pursued repair work part-time for several years, eventually working out of the house he built in Jefferson City in 2001. After retiring from his other job and focusing on his passion, he said it was exciting to move into a brand new space.

Having enjoyed the work, she returned during the summer and before long the idea their businesses should come together took hold. He said the partnership gives him the chance to pass his legacy and shop down to a new generation of music enthusiasts when the time comes.

While it's technically two different businesses operating out of the same space, the joint venture was officially announced in April and had a grand opening Saturday. The new location offers repairs, sales and rentals of string, orchestral and band instruments.

Field works at a bench he dates back to the early 1900s, a staple of his work space since a customer paid him for repairs with it in 1993. His restoration projects include a violin first produced as far back as the late 1700s. Despite the updates, his work retains the classic appeal of the instruments and their legacies, much like the shop he works in.

As he worked to get the final touches done on the new shop ahead of Saturday's grand opening event, Field had nothing but good things to say about the work and what might lie ahead.

"This is beyond what my dream ever was really," Field said. "I've been serving the strings community, and there's such a need that I'm happy to help meet and get to offer even more. I'm living the dream now."