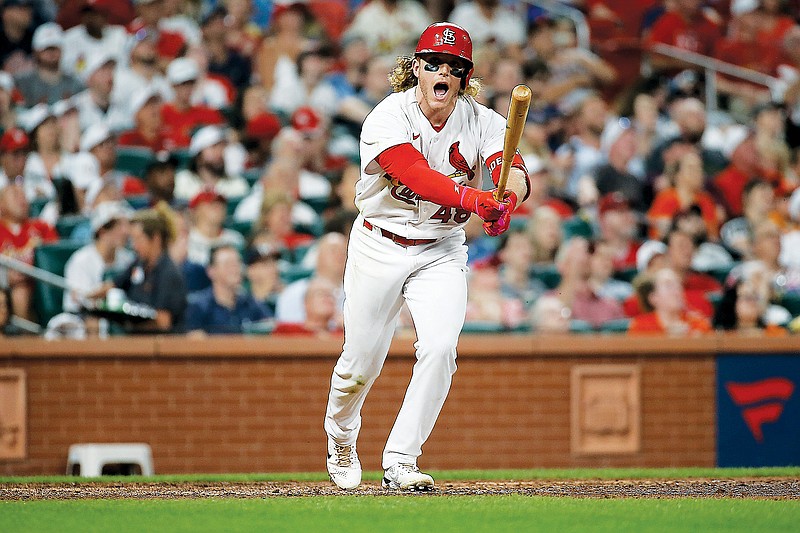 Curt Casali hit his first homer of the season during a five-run burst in the eighth inning. St. Louis has lost five of six.

“I was kind of expecting a changeup and I was able to stay on it just long enough to clip it out of here,” Casali said. “It’s not really easy to do in this big big ballpark.”

Webb (5-1) gave up just one run despite allowing the leadoff batter to reach in five innings. He didn’t permit a hit until Brendan Donovan’s shift-aided single to lead off the fifth and his defense turned a pair of double plays behind him.

Webb allowed three hits, walked three and struck out one. He said there was plenty of room for improvement.

“I think it was the first six hitters I was 0-2 … so it’s more like putting guys away right now just isn’t there,” Webb said.

Dominic Leone, Zack Littell and Jarlín García each pitched an inning to complete the combined six-hitter.

Casali’s two-run drive was his first homer since last Aug. 3. Pinch-hitter Evan Longoria had a two-run double before Casali connected.

“Longo’s hit was huge for us,” Kapler said. “It’s a big separator and I think Curt gave us a chance to use the bullpen differently.”

“The quality of his last two innings, he felt really good and he looked good and if it was up to him, he would have been fine going back out there,” Cardinals manager Oliver Marmol said. “We got him to a pitch count where we felt comfortable being able to build on next time.”

The Giants capitalized on Cardinals miscues that extended the second and third innings.

Luis González’s RBI single got the Giants on the board in the second. Hicks had struck out Brandon Crawford for the third out, but strike three was a wild pitch allowing Crawford to reach and setting up González.

Mike Yastrzemski hit a two-run double off the glove of diving center fielder Harrison Bader for a 3-1 lead in the third. Joc Pederson had lined out to Donovan before that, but the shortstop double-clutched on his throw to first, allowing Wilmer Flores to get back safely and negating a would-be inning-ending double play.

“We have a Gold Glove-caliber team all around and for me to get up here in front of the cameras and say anything otherwise is not right,” Hicks said. “Everybody has their days and there was obviously a couple of plays where they upset me a little bit and I need to be able to hone back in and refocus for the next pitch.”

LaMonte Wade Jr. reached three times and scored a run for the Giants, all without recording a hit. Wade walked twice and was hit by a pitch.

Paul Goldschmidt homered off Littell in the eighth to extend the Cardinals’ home run streak to nine games.

Notes: Giants INF Tommy La Stella (right Achilles inflammation) has gone 3-for-14 with a homer and two RBI in five rehab games at Triple-A Sacramento. … Cardinals RHP Adam Wainwright cleared COVID-19 protocols and may start as soon as Sunday. … RHP Drew VerHagen (right hip) retired all six batters he faced including three strikeouts in his second rehab assignment Thursday night at Double-A Springfield. … RHP Dakota Hudson (2-2, 3.56 ERA) will start for the Cardinals in the second of a three-game set today against the Giants and RHP Jakob Junis (1-0, 1.20 ERA). Neither pitcher factored into the decision when they faced each other last Saturday. Hudson gave up three runs in 4⅔ innings, while Junis gave up a pair of runs in five innings during the Giants’ 4-3 win.