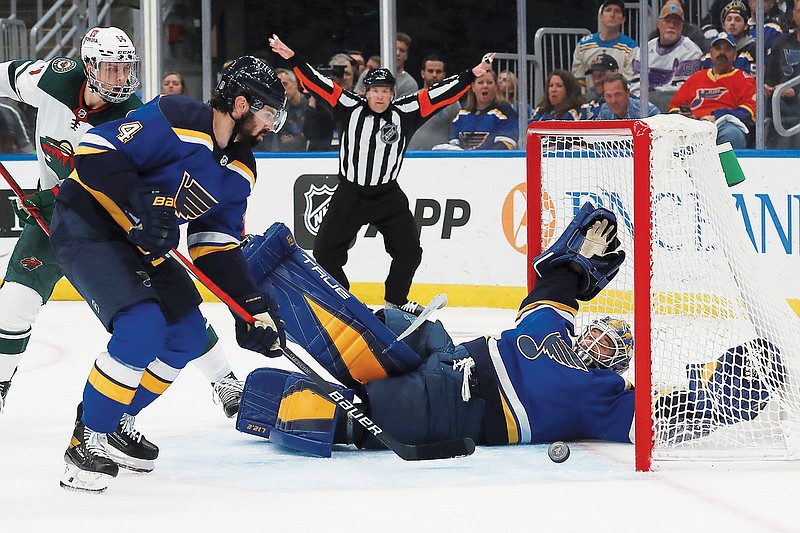 Blues goalie Jordan Binnington stretches out to make a save during the third period in Thursday night’s Game 6 of the Western Conference first-round playoff series against the Wild in St. Louis. (Associated Press)

ST. LOUIS -- The St. Louis Blues eliminated the Minnesota Wild in the first round of the Stanley Cup playoffs with a mid-series goalie change and an unconventional lineup.

Now, the team heads to Colorado to face the top-seeded Avalanche in the second round.

“I don’t mind starting the playoffs on the road,” Blues forward David Perron said. “I think a lot of times you have just nerves sitting at home and when you start on the road, you’re at the hotel kind of sitting with the guys.”

The Blues have met the Avalanche in the playoffs twice before, losing both matchups, including getting swept in the first round last season.

The Blues are confident they are in a better position to compete with Colorado than they were last year.

“I think we’re a better team than last year for sure,” Blues captain Ryan O’Reilly said. “It’s gonna be a very tough challenge for us. You know, they’re one of, if not the best, team in the league this year. They’re dynamic, deep as well.”

The Blues had nine players score at least 20 goals this season, the most in the NHL.

“We’re deeper this year than we were last year,” Blues coach Craig Berube said. “Up front we’re deeper, back end we’re deeper. So, I think it’ll be a tough series for sure.”

The Blues depth on the blue line was tested against the Wild. St. Louis lost Nicky Leddy, Robert Bortuzzo and Torey Krug to injuries in the first three games of the opening round.

Leddy and Bortuzzo returned for Game 5, but Krug (lower body) remains day to day. The injuries prompted the coaching staff to employ a starting lineup of 11 forwards and seven defensemen in the final three games against Minnesota.

“There’s a lot a lot that goes into it,” Blues forward Tyler Bozak said. “They (the coaches) see the game different than we do. They are watching all the time and they kind of get a really good feel for who’s going good and what they think is gonna work for us. So, obviously they made some really good decisions in this series.”

Scott Perunovich, who was an emergency call-up following Krug’s injury, is the seventh defenseman and has taken Krug’s spot on the power play, which went 8-for-26 against the Wild, scoring at least once in every game.

“I know we used a lot of (defensemen) in the series, but they all had a job to do and they did it,” Berube said. “That’s what it boils down to. And that was a big reason we stuck with the seven.”

The Blues won the last three games against the Wild after switching to goalie Jordan Binnington in Game 4. Binnington stopped 84-of-89 shots he faced for a .944 save percentage.

“I tried to have the mindset of going in there and just competing and giving the team a chance to win,” Binnington said.

The Blues’ upcoming opponent has had plenty of time to rest.

The Avalanche were the first team to advance to the second round this postseason, sweeping the Nashville Predators.

Colorado trailed in its opening series for a grand total of 4 minutes, 57 seconds, all in Game 4.

The Avalanche averaged 5.25 goals per game and converted at a 43.8 percent clip on the man advantage.

The Blues’ penalty kill allowed four goals in 24 attempts (83.3 percent) in the first round.

“Everybody trusts each other out there to do the right thing and back each other up,” Bozak said. “I think it starts with the goaltending. First and foremost, your goaltender has to be your best penalty killer and our goaltenders have been incredible all year.”

The Avalanche are in the Western Conference semifinals for a fourth straight season.

The Blues will have to find a way to slow down Cale Makar, who had 10 points in Colorado’s sweep. He is the first defenseman in NHL history with 10 points in a four-game series.

“They’re a great team, Colorado, we all know that,” Berube said. “They got a lot of high-end players. You’re gonna have to do a lot of things right.”