Some Catholic abortion foes are uneasy about overturning Roe 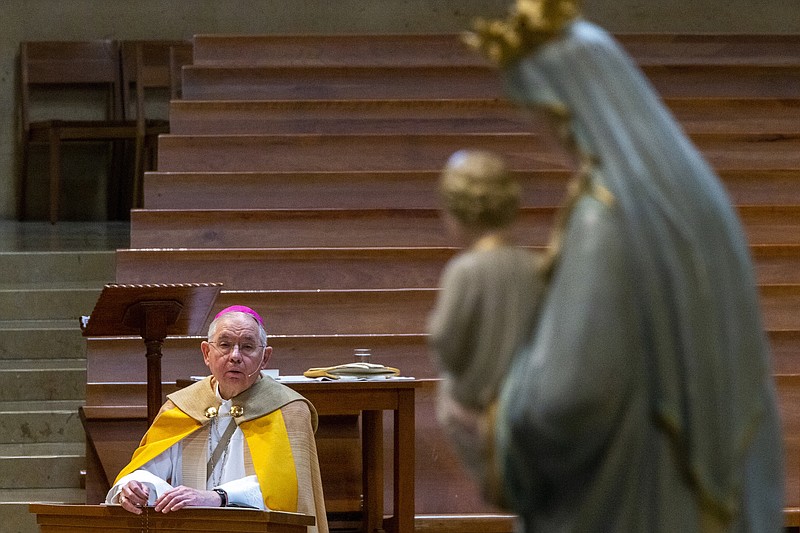 FILE - Archbishop Jose H. Gomez of the Archdiocese of Los Angeles, leads a live-steam service at an empty Cathedral of Our Lady of the Angels in Los Angeles on May 1, 2020. In the wake of the Supreme Court leak on abortion rights, a call for a day of fasting and prayer came from Gomez, the president of the U.S. bishops conference, and Archbishop William Lori of Baltimore, chairman of the USCCB&#x2019;s Committee on Pro-Life Activities. They specifically requested prayers for the overturning of Roe and for &#x201c;the conversion of the hearts and minds of those who advocate for abortion.&#x201d; (AP Photo/Damian Dovarganes, Pool, File)

NEW YORK (AP) -- Top leaders of the U.S. Conference of Catholic Bishops called on the faithful to pray and fast Friday, in hopes the Supreme Court is on track to overturn the constitutional right to abortion. Yet even among Catholics who oppose abortion, there is some unease about the consequences of such a ruling.

A recently leaked Supreme Court draft opinion suggests that a majority of the nine justices are poised to reverse the 1973 Roe v. Wade decision -- a move that would allow individual states to outlaw abortion.

Some anti-abortion Catholics say such an outcome would be the answer to their prayers. Others caution that Catholic leaders should distance themselves from the politically partisan wing of the anti-abortion movement and expand their concept of "pro-life" by supporting broad policies that set up safety nets for unwed mothers and low-income families.

Madison Chastain, a Catholic blogger and disability advocate, describes herself as anti-abortion, yet opposes overturning Roe and criminalizing abortions.

Factors that cause abortion, she wrote in the National Catholic Reporter, include lack of comprehensive sex education, inadequate health care, and workplace inequalities.

"Making abortion illegal before addressing these injustices is going to kill women, because women will continue to have abortions, secretively and unsafely," she wrote."

Sam Sawyer, a journalist and Jesuit priest, says he is a "dedicated pro-life advocate" who favors Roe's reversal. Yet he responded to the leak with an essay listing reasons why abortion rights supporters are so alarmed by that prospect.

"The pro-life movement and its political alliances are perceived as a threat not just to abortion itself but also to democratic norms, to judicial commitments to civil rights, and to women's health and economic security," Sawyer wrote in America, the Jesuit magazine for which he is a senior editor.

Republican politicians, backed by anti-abortion leaders, "have used the lives of the unborn as moral cover for ignoring other calls for justice," Sawyer wrote. "The pro-life movement's political allies have gutted social safety net programs that would make it easier for women to carry pregnancies to term."

The call for a day of fasting and prayer came from Archbishop José Gomez of Los Angeles, the president of the U.S. bishops conference, and Archbishop William Lori of Baltimore, chairman of the USCCB's Committee on Pro-Life Activities.

They requested prayers for the overturning of Roe and for "the conversion of the hearts and minds of those who advocate for abortion."

The archbishops echoed the calls of other Catholic leaders who, after the Supreme Court leak, suggested that a reversal of Roe should be coupled with expanded outreach and support for pregnant women and new mothers.

Lori highlighted a USCCB program called Walking With Moms in Need, saying the church should redouble its efforts "to accompany women and couples who are facing unexpected or difficult pregnancies, and during the early years of parenthood."

The bishops conference has designated the "threat of abortion" as its preeminent priority -- a viewpoint that many lay Catholics don't share. According to Pew Research Center surveys, 56% of U.S. Catholics say abortion should be legal in all or most cases.

Professor O. Carter Snead, who teaches law and political science at the University of Notre Dame, said via email that most Catholics engaging in anti-abortion activism "are not hard political partisans but rather people seeking to care for moms and babies by whatever means are available."

As an example, Snead cited Notre Dame's de Nicola Center for Ethics and Culture -- which he directs -- and one of its initiatives, called "Women and Children First: Imagining a Post-Roe World." Through teaching, research and public engagement, the initiative seeks to strengthen support for "women, children (born and unborn), and families in need."

However, achieving broad bipartisan collaboration on such initiatives may not come soon, Snead acknowledged.

"It is true, regrettably, that the only political party that has been willing to partner to provide legal protection for the unborn is the Republicans," he said.

Chad Pecknold, a theology professor at The Catholic University of America, also doubted there could be a post-Roe surge of bipartisanship on abortion.

"So long as Democrats insist on abortion for all nine months of a pregnancy, and as long as Republicans recognize that abortion runs contrary to the 14th Amendment, this will remain a partisan issue," he said via email.

"But the goal of the pro-life movement has never been partisan," Pecknold added. "The goal is justice for pre-born persons who have a right to live, to be loved, to be raised in a family."

Bishop Joseph Strickland of Tyler, Texas -- an outspoken critic of Catholic politicians who support abortion rights -- said abortion opponents "must continue to provide support and care for the mothers who find themselves in difficult situations."

"I pray that we may move to a place where mother and child are both held as sacred and society supports both lives in every way possible," he said via email.

David Gibson, director of the Center on Religion and Culture at Fordham University, questioned the significance of recent promises by Catholic bishops and other anti-abortion leaders to boost support for unwed mothers.

"Can this movement that is so tied to the Republican Party and the conservative movement suddenly pivot to mobilizing its people for socially liberal policies?" Gibson asked, referring to programs such as subsidized child care and paid maternity leaves.

Steven Millies, a professor of public theology at the Catholic Theological Union in Chicago, says the bishops bear partial responsibility for the entrenched polarization over abortion, which he expects to continue even if Roe is overturned.

"It's unrealistically hopeful to think that the habits of division will be abandoned," said Millies, suggesting that the bishops could have done more to reduce abortions over the years by pressing hard for stronger, better-funded social programs.

Rebecca Bratten Weiss, a writer and the digital editor of U.S. Catholic magazine, said she no longer labels herself "pro-life" -- though she was active in that movement for many years and believes all life is worthy of protection.

"The people who are working to overturn Roe have made it quite clear they have zero interest in expanding safety nets," she said. "They either haven't thought through the consequences, or they are OK with the consequences -- a higher rate of infant mortality, more women seeking unsafe abortions, more families driven to desperate measures."

Thomas Reese, a Jesuit priest who writes for Religion News Service, suggested in a column that reversal of Roe should be an occasion for reassessment by the many bishops who embraced the Republican Party because of its anti-abortion stance.

"Catholic bishops will celebrate this victory for which they have worked for decades, but ironically it should lead to a divorce between the bishops and Republicans," Reese wrote. "The GOP has nothing else to offer them. In fact, except for abortion, its proposals are the opposite of Catholic social teaching."

Assuming Roe is overturned, Reese added, "the bishops can declare victory on abortion and turn their focus to social programs ... that help women have and raise children so they are not forced to have abortions. "

Yet Reese doubts this will happen.

"My guess is they will continue to fight as long as there is no consensus in America on abortion," he wrote. "This will mean sticking with the Republicans and sacrificing all their other priorities."

Associated Press religion coverage receives support through the AP's collaboration with The Conversation US, with funding from Lilly Endowment Inc. The AP is solely responsible for this content. 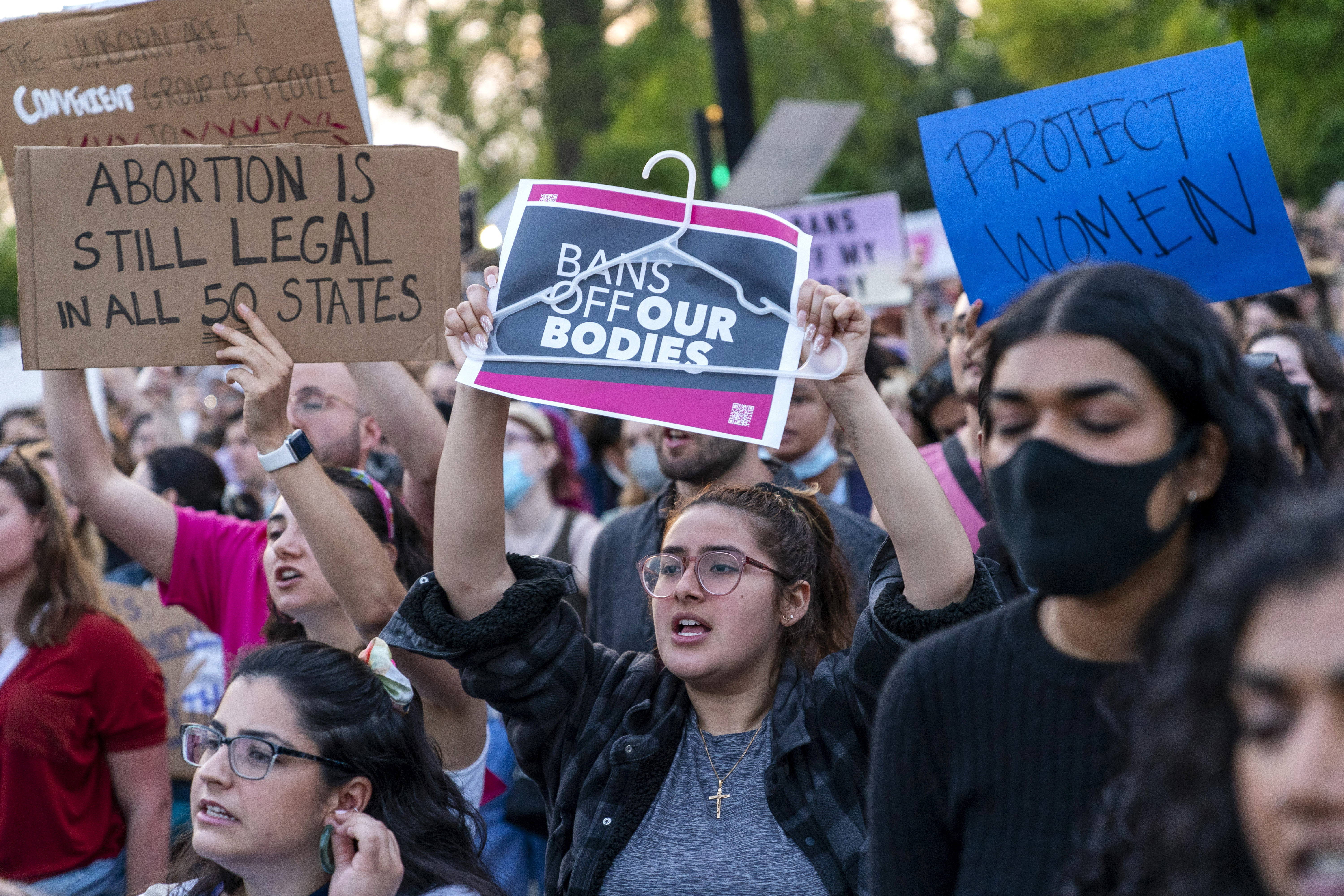 FILE - Fiorella Flores, center, a student at The Catholic University of America, joins demonstrators in protest outside of the U.S. Supreme Court Tuesday, May 3, 2022, in Washington. "Our campus claims to be 100 percent pro-life and despite advocates saying that, we came out to show that's not true," says Flores. (AP Photo/Jacquelyn Martin, File) 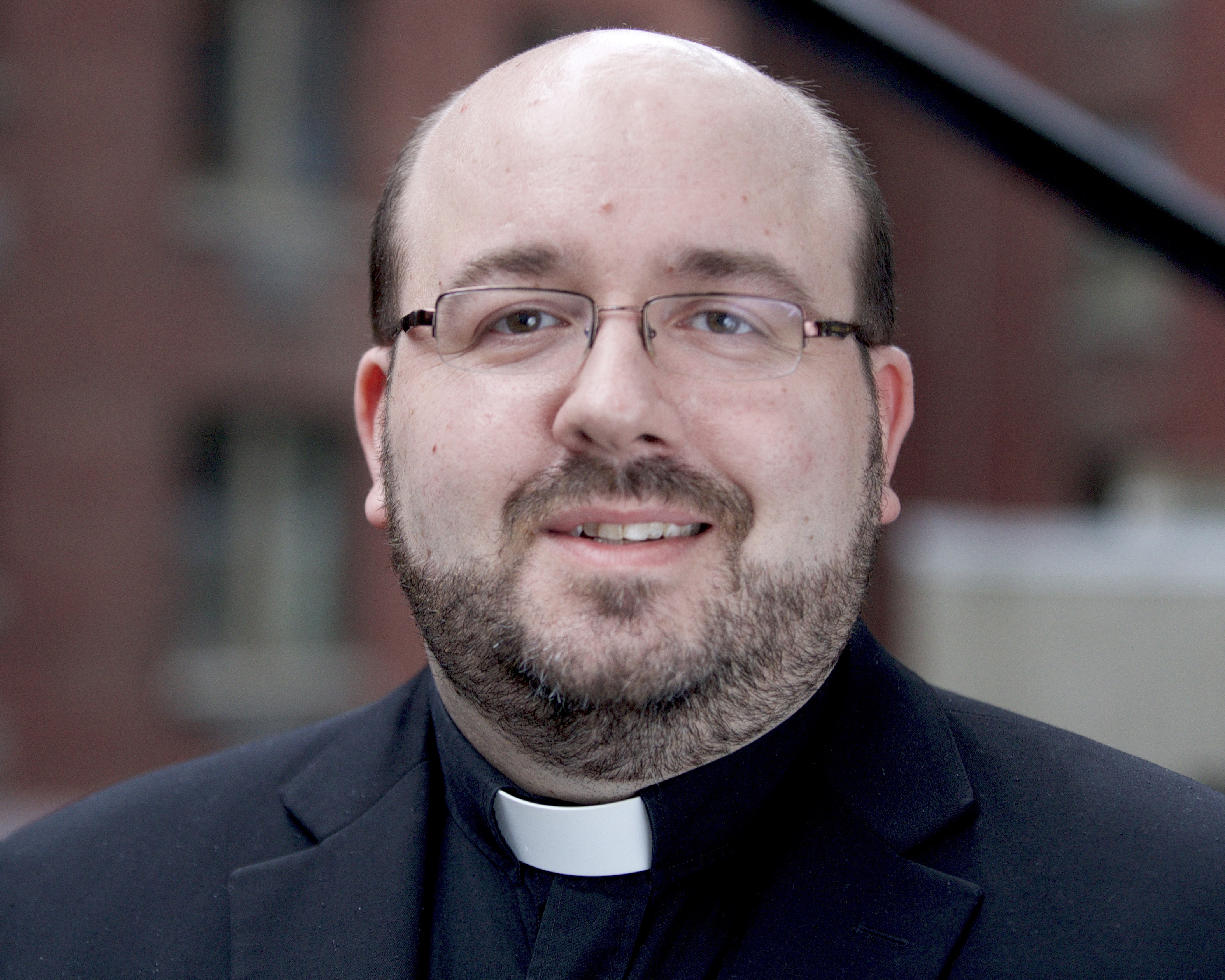 This undated photo provided by America Media in May 2022, shows Sam Sawyer, a Jesuit priest who is a senior editor of their magazine. He says he is a “dedicated pro-life advocate” who favors Roe’s reversal. Yet he responded to the Supreme Court leak with an essay listing reasons why abortion rights supporters are so alarmed by that prospect. “The pro-life movement and its political alliances are perceived as a threat not just to abortion itself but also to democratic norms, to judicial commitments to civil rights, and to women’s health and economic security,“ Sawyer wrote in the magazine. (Courtesy America Media via AP)