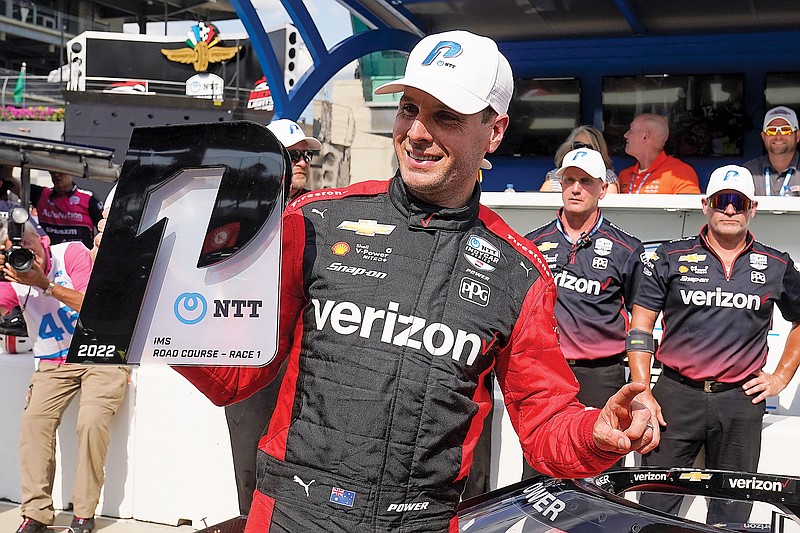 Will Power holds the trophy Friday after winning the pole for today’s IndyCar Series race at Indianapolis Motor Speedway in Indianapolis. (Associated Press)

The Australian used his final qualifying lap Friday to move past five drivers and claim the top starting spot for the IndyCar Grand Prix.

“I feel so privileged to get so close to him. I never thought I’d get there,” Power said, referring to Andretti. “We’ll just keep chipping away at it, we know that it’s there. Honestly, I feel pretty blessed to get this close.”

First, though, the Team Penske driver has bigger goals today -- like winning his first race of the season. Power has won on this course four of the previous five times he started from the top qualifying spot, and he’s trying to extend Chevrolet’s dominance this season.

All four race winners have been powered by Chevy-powered cars and six of the first seven cars on the 27-car grid use Chevrolet engines. The lone exception is Palou, who drives for Chip Ganassi Racing.

“I wanted to get pole but I knew we always lack a little bit on used reds, perhaps because I don’t have a lot of experience,” the 25-year-old said. “But I’m not surprised that it’s Will on the pole.”

Power is the fifth different pole-winner in five races and there was nothing simple or easy about claiming this one on another unseasonably warm, sunny day. Tires wore down quickly in the heat, and Power believes they will again today -- if it doesn’t rain.

And it wasn’t just Palou he had to hold off, either.

Josef Newgarden, Power’s teammate who has two wins this season, starts third after limiting himself to one hard lap in the third and final qualifying group. Conor Daly of Ed Carpenter Racing will start a season-best fourth on his home track.

“It’s much nicer to fight with these guys than not. As Will Power says all the time these are some of the best drivers in the world and it’s so close, it’s insane how small the gap is. We put three solid runs together. It would be nice to be on the front row, but we had one step there and that’s all it takes.”

Especially when Power is on the track.

“I just did my absolute best,” Power said. “I didn’t know where it would stack up. It was a good lap.”

Nobody was more upset about their qualifying position than defending race winner Rinus VeeKay or six-time series champ Scott Dixon.

VeeKay was strong in practice and led his first-round qualifying group — until the final minutes when he switched to the reds and faded from first to eighth with a fast lap of 1:09.9550. He’ll start 15th today.

Dixon, the 2008 Indianapolis 500 winner from New Zealand, has missed the second round of qualifying in three straight races and this might have been his poorest performance of all. He finished 11th in the 13-driver group with a time of 1:10.1694. He’ll start 21st.

“It’s just a different car every time we go out so you just try to adjust for that,” he said. “Honestly, it sucks right now. We’ve got to figure it out.”

Notes: “That’s the fastest time I’ve run around here,” seven-time Cup champion Jimmie Johnson said after qualifying 27th with a lap of 1:11.4599. “Unfortunately, it just wasn’t fast enough.” … Roman Grosjean and Graham Rahal, who traded barbs about a crash at Barber Motorsports Park, will start directly in front of Rahal today. Grosjean qualified 10th, the outside of Row 5, while Rahal starts 12th in Row 6. … If Newgarden wins for the third time this season, he would collect $500,000 for his team and an additional $500,000 that will be donated to charity as the first driver to win this season on an oval, road course and street course as part of the PeopleReady Force for Good Challenge program. … Indiana Pacers guard Tyrese Haliburton, who was acquired in a midseason trade from the NBA’s Sacramento Kings, is getting a crash course in Indy culture. Before today’s race, the 22-year-old emerging star will turn laps in IndyCar’s two-seat car piloted by 1969 Indianapolis 500 winner Mario Andretti. Haliburton also is expected to meet defending series champion Alex Palou of Spain for a jersey swap.