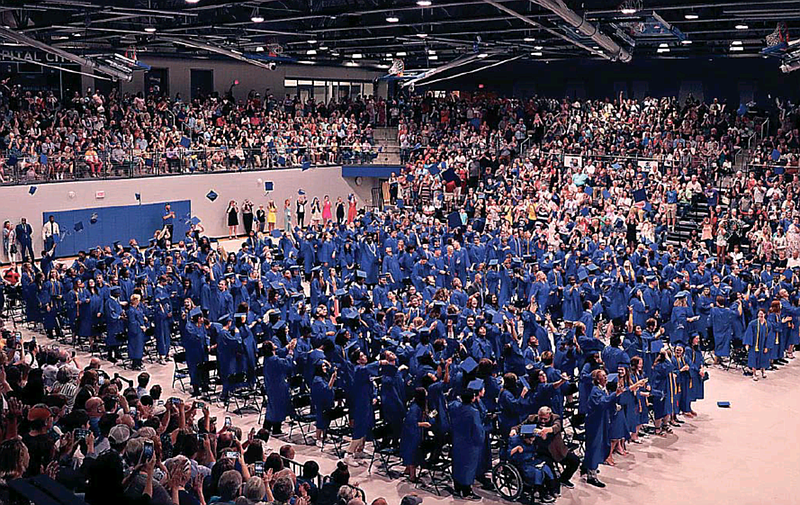 Capital City High School sent its graduating class out into the world Friday in the first graduation ceremony for the new school.

The ceremony opened with the Star Spangled Banner, performed by CCHS choir seniors, and then the rest of the blue-robed graduates entered to thunderous applause and the sounds of "Pomp and Circumstance."

The CCHS gym was jam-packed, with nearly every inch of bleachers and every spare chair filled.

Friday's graduation ceremony marked the first for the new high school. In his opening address, Superintendent Larry Linthacum celebrated the benefits of a second high school, including increased opportunities for students to participate in sports and activities.

Student Body President Sawyer Lillard addressed the class, recounting the experiences and memories of the last three years at CCHS. He also reminded students of their first year spent at Simonsen Ninth Grade Center by unveiling a freshman class photo board, an item that survived the tornado. Lillard remarked on the difficulties that the class of 2022 has faced, including a transition between schools, construction and COVID-19.

He gave the class three challenges: follow your dreams, find a good role model and don't ever give up, which has been a theme for Lillard's graduating class.

CCHS Principal Ben Meldrum, formerly the principal of Simonsen, reminded students of a quote he had shared with them as freshmen: "In life, you are either a passenger or a pilot. It's your choice."

He encouraged graduates to think about the legacy they are leaving.

"Wherever your path takes you, leave your mark on it," Meldrum said.

Meldrum recognized seniors for their participation in activities and those entering the military.

More than 40 students were honored for achieving the Presidential Academic Fitness Award, which requires a 3.5 GPA and a score at or above the 85th percentile for reading or math on the ACT.

The George Washington Carver award went to the top 10 percent of the graduating class.

The class of 2022 also had 13 salutatorians with post-graduation plans ranging from aviation to education to intercultural studies to pre-pharmacy.

Carrington Stilabower was named class valedictorian with a 4.111 GPA and addressed the class.

"We may not have gotten everything we expected, but we had each other," Stilabower said in her speech about their high school experience.

Stilabower celebrated the class of 2022 as pioneers, paving the way for future graduating classes, a role she encouraged them to take with them into the future.

"Let us each continue to pave the path for others, and make history wherever we go," she said.

Jefferson City School Board members handed out diplomas to each of the 336 graduates. An honorary diploma was also given to Linthacum for his hard work and dedication.

Meldrum sent the graduates off with his closing remarks.