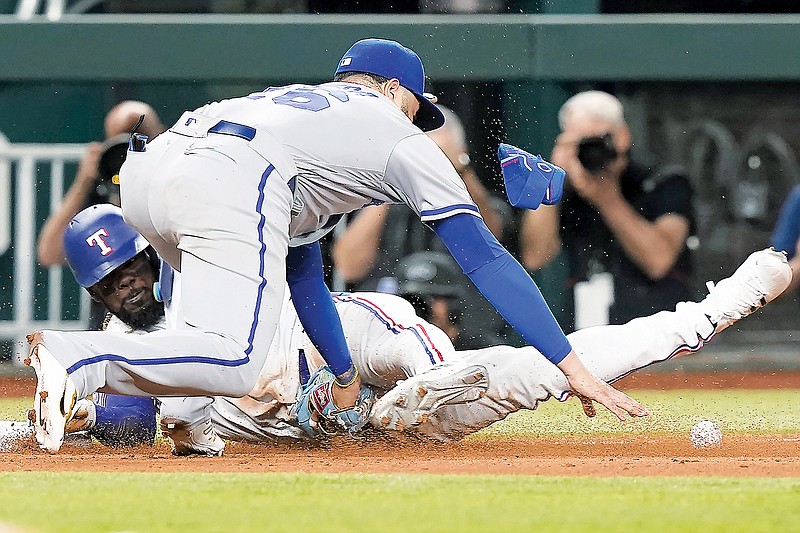 Royals third baseman Emmanuel Rivera can't handle the ball for the tag on a triple by Adolis Garcia of the Rangers during the eighth inning of Thursday night's game in Arlington, Texas. (Associated Press)

The Royals’ first hit literally was off Hearn. Michael A. Taylor sent a liner up the middle off the pitcher’s leg that continued to the left of second base and into left field with two out in the second inning.

Joe Barlow pitched a scoreless ninth, retiring Whit Merrifield on a grounder with two runners on base, for his sixth save in six opportunities.

Hearn had not pitched in 11 days, while he was briefly out of the rotation and available to come out of the bullpen.

“I was trying to come in consistent,” Hearn said. “You can try to prepare for games but it’s different when you get in there your first time seeing a lot of batters. It felt a little weird.”

Hearn threw 64 pitches and said he could have gone longer.

“We weren’t sure how he was going to respond after being out for so long,” Woodward said. “He was really honest, but you could tell he was a little bit fatigued.”

Miller led off the bottom of the first inning with an infield hit against a shift and later scored on a two-out, popup single by Kole Calhoun over third baseman Emmanuel Rivera’s head in short left field.

Miller hit a home run, his fifth, off the right field foul pole in the seventh. The homer was reviewed, and the home run call was confirmed.

Miller popped out with the bases loaded in the fourth inning of a 1-0 game.

“He was kicking himself,” Woodward said. “He was saying, ‘I’ve got to get a run in there.’

“He thrives in big spots because he has no fear. He said he knew it was a home run because he knocked down the pole.”

Adolis Garcia restored Texas’ two-run lead in the bottom half when he tripled and scored on Josh Staumont’s wild pitch.

Heasley was recalled from Triple-A Omaha to take the place of LHP Kris Bubic, who was optioned to Omaha. The 25-year-old Heasley was 1-1 in three starts for the Royals last season.

“It’s an opportunity,” Royals manager Mike Matheny said. “He’s going to be someone that we’re going to watch closely now that he’ll be here to help us. He’s got three plus pitches -- changeup and breaking ball are both very good, and his fastball. This is going to be a good test for him back in his home territory. It’s an extra add to already being a great test, and he’s ready for it.”

Heasley is from Plano, Texas, 29 miles from Globe Life Field. Hearn is from Royse City, an additional 20 miles from the Rangers’ home field.

Notes: Royals C Cam Gallagher was eligible to come off the injured list Thursday, but he remained inactive. C Sebastian Rivero started in his first major league game this season after being recalled from Double-A Northwest Arkansas. … Rangers RHP Josh Sborz, who had been optioned to Triple-A Round Rock after coming off the IL May 1, returned to the Rangers’ roster. He replaced LHP Kolby Allard, who was optioned to Round Rock. … The Royals begin a three-game series tonight at Colorado with RHP Zach Greinke (0-2, 2.67) opposing Rockies LHP Kyle Freeland (1-3, 3.94). … The Rangers are home for a three-game weekend series beginning today against Boston, with Texas RHP Dane Dunning (1-1, 3.38) going against Red Sox RHP Nick Pivetta (0-4, 6.08).