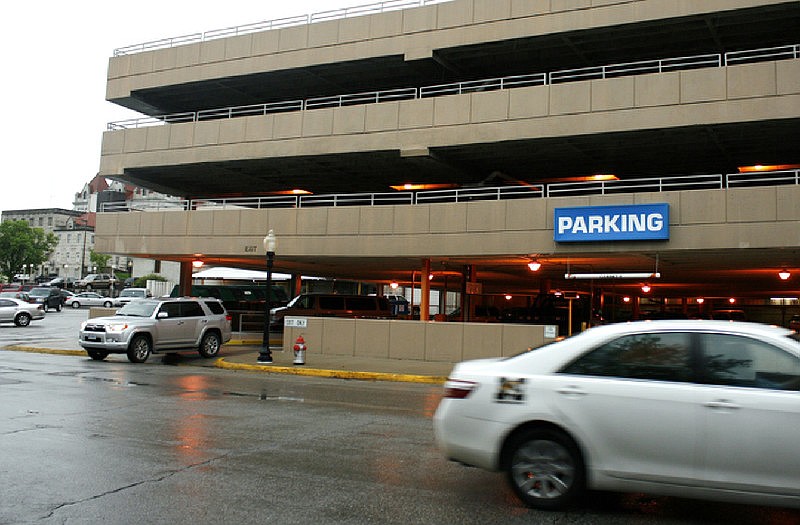 This May 2011 file photo shows the city parking garage along Capitol Avenue in downtown Jefferson City.

Potential solutions to a "parking crisis" around the Capitol could come as soon as June when a study on how to improve downtown parking is expected for council members to see.

The study comes as city leaders have met with state officials to discuss how to address what they have described as a "parking crisis" around the Capitol.

Public Works Director Matt Morasch said the study will include a full evaluation of the two locations' current conditions and suggested solutions.

"We know there are problems with the garage," he said. The study will also look "at our pay systems -- how we can bring those up to date -- elevators, all kinds of various aspects of the garage. Basically, a top-to-bottom evaluation."

Council agreed to hire Structural Engineering Associates (SEA) for $291,300, with $28,700 in contingency funds. The combined $320,000 will come from the city's parking fund, which comes from parking meters and fees.

A 2017 study identified a deficit of 592 spaces on the east side of the Capitol. Peak parking times are March, April and May when the Legislature is in session.

During the monthly meeting of the City Public Works and Planning Committee on Thursday morning, Ward 4 Councilman Ron Fitzwater, who chairs the committee, said he and Mayor Carrie Tergin, along with other city officials, have met with state officials as they are planning to start a multi-million dollar renovation project at the Capitol which will affect parking there.

The Capitol would get a new 163,000-square-foot annex under the south lawn. A new visitors entrance would be added under the governor's portico and lead into the basement as well.

The project also calls for the construction of a new parking structure where the current Senate garage is, adding 200-300 public parking spaces and more metered parking spots.

How soon work on this would start was not mentioned.

"When we talked about this, and it's fascinating to me, is the perception that the Madison Street garage is not in the Capitol Complex," Fitzwater said. "Walking down that one block, people perceive that it's on the east end of town. So even if we make a significant investment there, I'm not sure it's going to address our parking needs in the complex because of that perception.

"I think we have the attention of the state, now, especially as they are looking at the renovation and now maybe the time to address the problems we've been talking about the past few years at the city level," Fitzwater added.

According to their contract, SEA will look at four options for the Madison Street parking garage:

• Repair and rehabilitate the existing building.

• Expand the building to the east.

• Demolish the garage or deck to build a larger structure at the same sites.

• Demolish both and build a larger structure at the same site.

The goal for any of the last three options would be to increase the number of parking spaces between the two locations to 800-1,000 spots.

Another option could be to do nothing, something City Operations Division Director Britt Smith said, "is not a good option."

"When we do that construction, we're going to be disrupting 550 parking spaces so that's a significant loss of parking," Smith said. "We'll have to coordinate with the state because if you took the Capitol basement out, the Senate garage out and the Madison Street garage out, and if at all were done at one time, that doesn't work. We don't have enough buses to shuttle people back and forth to the Capitol if that occurred."

"That's why timing for this work is going to be so crucial to determine," Fitzwater said.

"Our ultimate goal has to be providing, whatever their needs, something that works for them," Smith said.