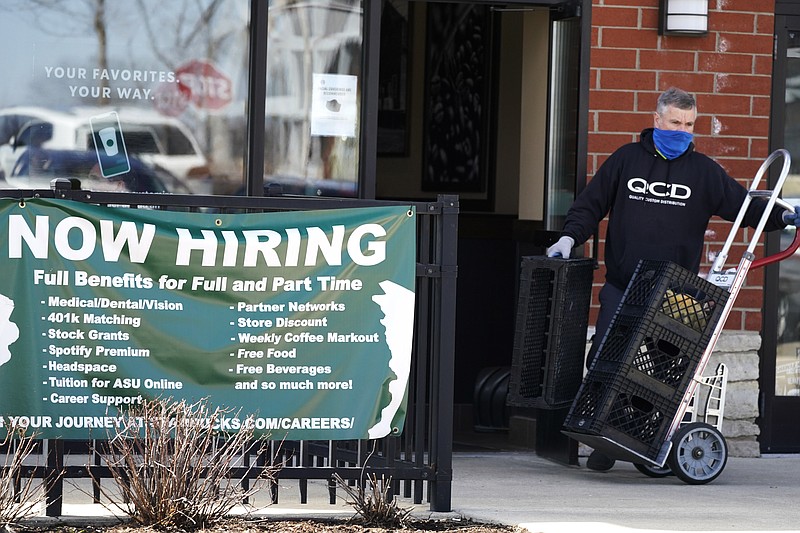 FILE - A hiring sign is displayed outside of a Starbucks in Schaumburg, Ill., Friday, April 1, 2022. The number of Americans applying for jobless aid ticked up slightly last week but the total number of Americans collecting benefits remained at its lowest level in more than five decades. Applications for unemployment benefits rose by 1,000 to 203,000 for the week ending May 7, the Labor Department reported Thursday, May 12. (AP Photo/Nam Y. Huh)

Applications for unemployment benefits rose by 1,000 to 203,000 for the week ending May 7, the Labor Department reported Thursday. First-time applications generally track the number of layoffs.

The four-week average for claims, which evens out some of the weekly ups and downs, rose 4,250 from the previous week to 192,750.

American workers are enjoying historically strong job security two years after the coronavirus pandemic plunged the economy into a brief but devastating recession. Weekly applications for unemployment aid have been consistently below the pre-pandemic level of 225,000 for most of 2022, even as the overall economy contracted in the first quarter.

Last week, the government reported America's employers added 428,000 jobs in April, leaving the unemployment rate at 3.6 percent, just above the lowest level in a half-century. Hiring gains have been strikingly consistent in the face of the worst inflation in four decades, with employers adding at least 400,000 jobs for 12 straight months.

Earlier this month, the Bureau of Labor Statistics reported that U.S. employers posted a record 11.5 million job openings in March -- an unprecedented two job openings for every person who is unemployed. A record 4.5 million Americans quit their jobs in March -- a sign they are confident they can find better pay or improved working conditions elsewhere.

As hot as the job market is, inflation is even hotter. On Thursday, the government reported U.S. producer prices soared 11 percent in April from a year earlier, a hefty gain that indicates high inflation will remain a burden for consumers and businesses in the months ahead.

On Wednesday, the government reported that inflation eased slightly in April after months of relentless increases but remained near a four-decade high. Consumer prices jumped 8.3 percent last month from a year ago, just below the 8.5 percent year-over-year surge in March, which was the highest since 1981.