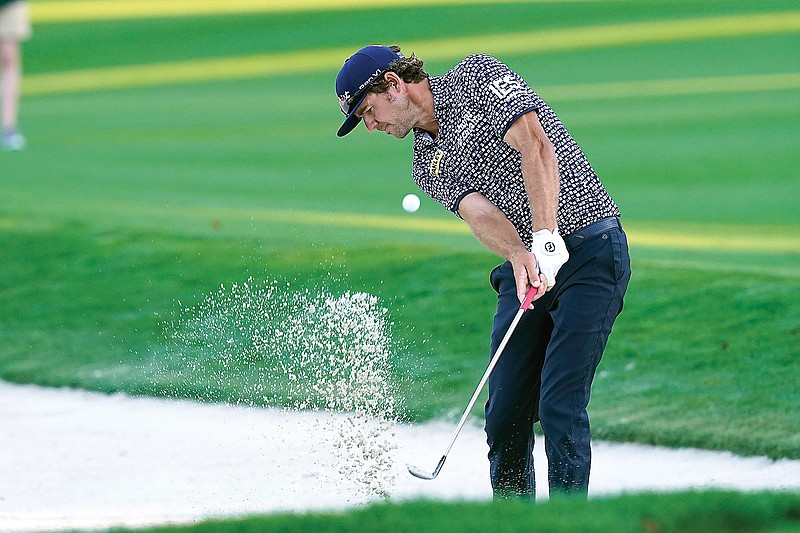 In this March 10 file photo, Lanto Griffin hits from a bunker on the 17th fairway during the first round of play in the Players Championship in Ponte Vedra Beach, Fla. (Associated Press)

Even if Lanto Griffin was thinking only about the next shot, his 32 on the final nine holes of the Wells Fargo Championship made him the last man to qualify for the PGA Championship.

It’s hard to tell with the PGA of America, which lacks the transparency of the other majors but makes amends by delivering the strongest field every year.

When the final field was announced Monday -- one of the 156 spots is set aside for the winner of the AT&T Byron Nelson if he’s not already eligible -- the PGA Championship was assured of having the top 100 players in the world, provided they all play.

Defending champion Phil Mickelson is still on the list, though that’s not breaking news. While out of public view since he managed to offend the PGA Tour and the Saudi-funded rival league he’s been promoting, there’s been no official word whether Lefty will be at Southern Hills next week.

More promising are the prospects of Tiger Woods, the last winner at Southern Hills. And still listed somewhere between “questionable” and “doubtful” if golf had an injury report is Bryson DeChambeau, who only last week had stitches removed after surgery on his left hand.

No one doubts the PGA Championship has the strongest field, even with three past champions tied for last in the world rankings, and 20 professionals who spend more hours running their golf clubs than grinding on their short games.

It’s how it arrives at its field that remains a mystery.

The goal is to have the top 100 in the world. It just doesn’t say that anywhere in the criteria.

There are places for major champions, top finishers from last year’s PGA Championship, PGA Tour winners during the past year, recent Ryder Cup players still in the top 100 and a PGA Tour money list from the last 12 months.

And then there are “special exemptions.”

One of these days, the PGA of America will get around to calling it what it is: a category to fill the field with the top 100 players in the world who aren’t already in.

Kerry Haigh, the chief championships officer for the PGA of America, tipped his hand last year when 99 of the top 100 -- Matthew Wolff was missing -- played at Kiawah Island.

“It’s something we pride ourselves on at the PGA Championship, that we have the strongest field as measured by the Official World Golf Ranking,” Haigh said.

The special exemptions are not only about the world ranking. Henrik Stenson and Zach Johnson received exemptions, just like current Ryder Cup captains before them. Billy Horschel was among those who received an exemption before the PGA points list (money list) was finalized.

That takes us back to Griffin.

According to the final category, the PGA points list is used to fill the field. Griffin was first in line for that, while also being among the top 100 in the ranking. Without that 67, he would have been outside of both lists.

Most curious about this year’s use of “special exemptions” is the PGA of America went well beyond the top 100 in the world. That was to protect against someone moving into the top 100 after this week.

Added were Daniel van Tonder (103) and Justin Harding (104) of South Africa, Ryan Fox (106) of New Zealand, Laurie Canter (107) and Sam Horsfield (110) of England and Kazuki Higa (112) of Japan. All but Harding and Canter are playing their respective tours this week and would have a chance to crack the top 100.

Then again, as PGA Tour members they had ample opportunity to qualify.

The surprise was skipping in the world rankings Adrian Meronk (113) -- he would have been the first Polish player in PGA Championship history -- and Joel Dahmen (114) to offer an exemption to Bio Kim, who won last week on the Asian Tour.

It was Kim’s first win since the Korea Golf Association suspended him one year (down from the original three-year ban) for flipping off the crowd after a phone camera went off during his swing in the final round of a tournament he won.

For those who missed out, the ball was always in their hands, as it was for Griffin. No one ever shows up at a major and notices who didn’t qualify. All the right players are there, even if some U.S. fans don’t know much about them.

“No problem with that. It’s just the way it was,” Torrance said Monday night in a text message.

The PGA Championship a decade ago briefly considered the notion of being played overseas. Now the world is coming to the PGA, just like the other majors.

Twenty-five players are not PGA Tour members. Throw out the club pros and Americans comprise roughly 46 percent of the field. That’s probably how it should be, even if the PGA Championship doesn’t make clear how it gets to that point.