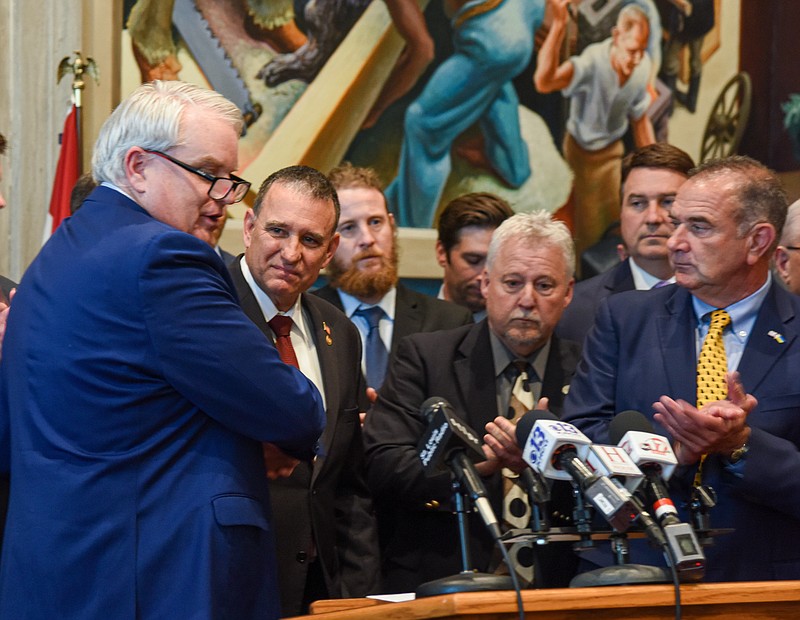 Click the link below in our digital edition to read the full bill:

Republican state lawmakers and agriculture groups are lauding a bill that makes it more difficult for utility companies to employ eminent domain as a historic win for property rights.

The Missouri General Assembly passed HB 2005 on Wednesday, sending it to the governor's desk for final approval. The bill, which has been roughly eight years in the making, changes state statutes to make approval from the Public Service Commission null and void unless a gas, electrical or water provider begins construction on the government-seized property within two years.

"Property is more than just something on someone's balance sheet to our families," Kehoe said. "It transcends generations many times, and it is who we are as a people, who we are as a country."

Rep. Mike Haffner, R-Pleasant Hill, sponsored the bill in the House and said he appreciates it was a team effort among Republican lawmakers and various agricultural groups in the state.

"We embrace economic development, we embrace it as a state, especially when it comes to improving our electrical grid," Haffner said. "But we will not do it on the backs of Missouri farmers, ranchers and the Missouri agricultural industry."

HB 2005 would require electrical corporations building transmission lines, except those under a cooperative business plan, to provide at least half of their electrical load to Missouri consumers to be considered a public service and allowed to condemn property for eminent domain.

Eminent domain, generally, refers to governmental power to take private property to convert it for public use.

The bill also requires developers to pay 150 percent of the fair market value for agricultural land in condemnation proceedings, and requires at least one of the three court-appointed commissioners in those proceedings to be a farmer of the same county for at least a decade. If the proceeding is initiated by an electrical company and the amount awarded to the property owner is greater than the condemning authority's offer, courts are permitted to award attorneys' fees to the property owner.

Mike Deering, executive vice president of the Missouri Cattlemen's Association, said the legislation is critical because two more transmission lines are expected to be approved this summer. He said without it, property rights would "continue to be trampled."

Haffner said he sees the bill as a way to support Missouri's leading industry by correcting problems in state statute, calling it a "forward-looking" bill.

"This bill is about protecting the Constitution and the foundational right that we all hold so dear, and that's property rights," he said.

He said if there's an energy transmission line in Missouri, it needs to bring power to the state and benefit its residents.

"Missouri's ripe for development in energy technology and energy independence," Plocher said. "I just think we're not going to be taken advantage of and people are going to have to respect Missouri's citizens and not just use us to pipe power to the east coast."

Lawmakers pushed similar legislation last year, but the bill didn't make it across the finish line because of disagreement within the Senate's Republican caucus during the final week of session. Senate leadership vowed to get the legislation passed this session.

Sen. Jason Bean, R-Holcomb, carried the bill in the Senate and said its passage has been a long time coming.

"A lot of hard work has went into eminent domain reform for the last eight years, and I'm very appreciative that we were finally able to take a first step in passing legislation in defending our property rights here in the state of Missouri," Bean said.

Hawkins said the bill puts farmers in a better position for the economic future of the state, particularly as the energy industry continues to change and develop.

"This legislation is a bold step to at least say that Missouri is no longer wide open and fully exposed to, essentially, the use of eminent domain for private gain," Hawkins said.

He said the bill helps the state strike a balance between secure energy production and private property rights, but it's only the beginning of conversations surrounding "common sense reforms" to eminent domain.

Haffner said he wants to ensure state laws relating to eminent domain are consistent. He pointed to dwelling exemptions, which give land owners 125 percent of fair market value for property seized through eminent domain, as an area he wants to revisit.

"We only took a look at a very small section of (eminent domain statutes), some portions of this haven't been looked at since the 1980s," he said.

More News
Note: Story was updated to remove references to how the bill might affect the Grain Belt Express.