Chiefs to open season on the road against Cardinals 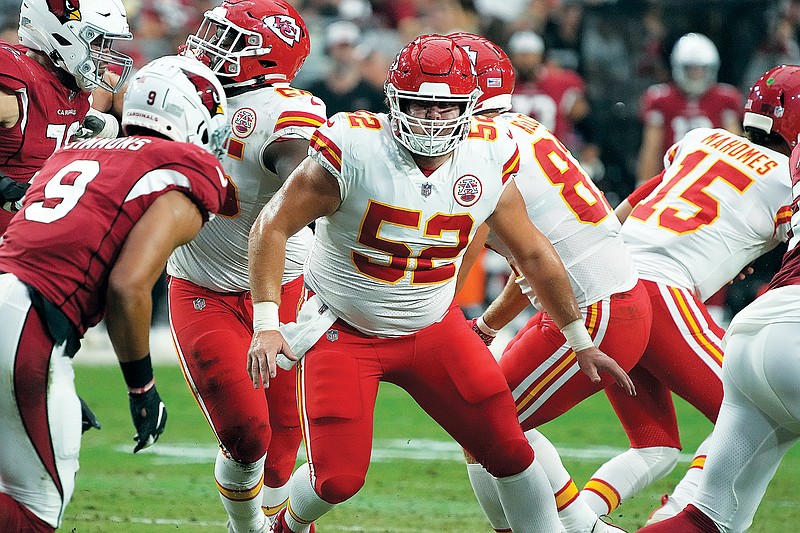 In this Aug. 20, 2021, file photo, Chiefs center Creed Humphrey looks for somebody to block during a preseason game against the Cardinals in Glendale, Ariz. The Chiefs will play at the Cardinals to open the 2022 regular season. (Associated Press)

The Kansas City Chiefs found out their schedule for the upcoming 2022-23 NFL season Thursday night.

The Chiefs will start the season on the road in Arizona against the Cardinals, who will be without All-Pro wide receiver DeAndre Hopkins due to a six-game suspension for violation of the NFL’s performance enhancing drug policy.

Kansas City received the maximum amount of primetime games (five), with the first coming in Week 2 against the Los Angeles Chargers on Thursday Night Football’s debut on Amazon Prime Video. The Chiefs will play in Tampa Bay for a Super Bowl LV rematch on Sunday night in Week 4 before hosting the Las Vegas Raiders on Monday night in Week 5.

The two other primetime games will be Week 9 when the Chiefs host the Tennessee Titans on Sunday night and in Week 14 on the road against the Denver Broncos on Sunday night.

The Chiefs will travel to Indianapolis in Week 3 for Matt Ryan’s Lucas Oil Stadium debut with the Colts and will host a rematch of last year’s AFC Divisional Round opponent, the Buffalo Bills, in Week 6.

The Chiefs will face their other recent Super Bowl foe in Week 7 when they travel to play the San Francisco 49ers for the first time since the two sides played in Super Bowl LIV before heading into the Week 8 bye.

Coming out of the bye, the Chiefs will play the Titans in Week 9 before hosting the Jacksonville Jaguars the following week.

The schedule heats up after Week 10.

Kansas City will travel to Los Angeles to play the Chargers in Week 11 before hosting the defending Super Bowl champion Los Angeles Rams in Week 12.

The next week the Chiefs will travel to play the team they lost to in last year’s AFC Championship Game in the Cincinnati Bengals and travel to Denver for Week 14.

The Chiefs will finish the season by playing on the road in Houston in Week 15, hosting the Seattle Seahawks on Christmas Eve and the Broncos in Week 16 .

Kansas City will close the regular season with a game at Las Vegas.