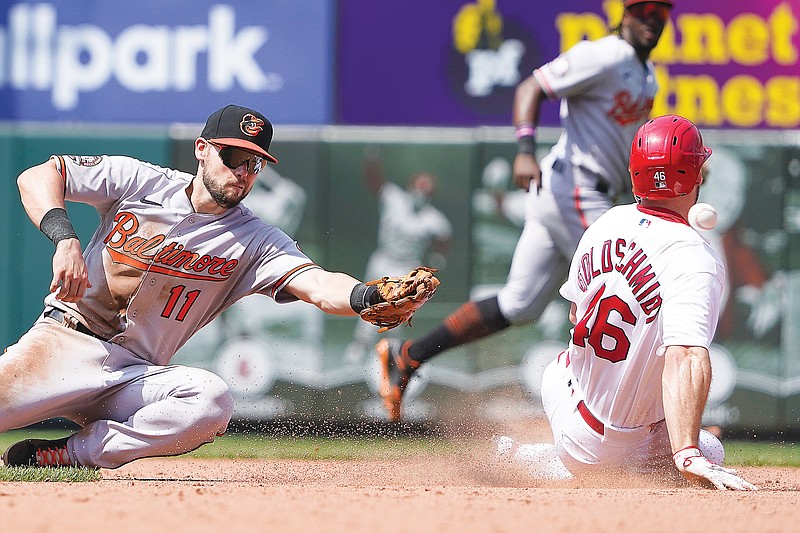 Paul Goldschmidt of the Cardinals is safe at second on a stolen base as the throw gets past Orioles second baseman Chris Owings during the eighth inning of Thursday afternoon’s game at Busch Stadium. (Associated Press)

ST. LOUIS -- Rylan Bannon became just the third Baltimore player since 2000 to get a hit on the first pitch of his big league career, Jorge Mateo and Anthony Bemboom homered and the Orioles beat the St. Louis Cardinals 3-2 on Thursday.

“I let him know he’s in the big leagues an hour before the game, ” Baltimore manager Brandon Hyde said. “So, he’ll never forget that. I know it’s a special day for him and his family.”

Bannon, a 26-year-old third baseman, was recalled from Triple-A Norfolk before the game and singled on a pitch from Steven Matz (3-3) with two outs in the second inning, one batter after Mateo homered to put the Orioles ahead.

“I trusted the scouting report. I stuck to my approach,” Bannon said. “I got a pitch middle and put a good swing on it. It was a fastball right down the middle.”

“I felt really like I didn’t get my feet under me until the fifth or so inning,” Bannon said. “After a couple of at-bats, that’s when it really sunk in where I was. It was a weird feeling being out there early in the game. It was awesome. It’s definitely good to be here. It’s cool to be here in the locker room.”

The previous Orioles to get a hit on their first pitch were Rhyne Hughes on April 24, 2010, at Boston and Willie Morales on April 9, 2000, against Detroit, according to the Elias Sports Bureau.

Bemboom hit his first big league home run since September 2020 in the seventh, and Cedric Mullins added an RBI single off Génesis Cabrera later in the inning for a 3-0 lead.

Baltimore took two of three from the Cardinals and improved to 4-1 in rubber games this season after going 7-5 in such games in 2021.

Keegan Akin (1-0), the second of six Orioles pitchers, got just his fourth win in 16 big league decisions, allowing one hit in 2⅔ scoreless innings and striking out four on a bullpen day for the Orioles.

Bryan Baker gave up one hit in 2⅓ innings of his first big league start.

Dylan Carlson hit a solo homer off Cionel Pérez in the seventh after Tyler O’Neill bounced into a double play. Nolan Arenado added a sacrifice fly in the eighth against Joey Krehbiel.

Felix Bautista got four straight outs for his second save of the series and the season.

“It’s always been my dream to close games for a team,” Bautista said through a translator.

A double play, the Orioles’ third, ended the game. O’Neill, who hit a one-out bloop single, was doubled up when Mateo ran down a fly in short center.

Trey Mancini singled twice and has a hit in eight of nine games since returning from bruised ribs May 3.

Notes: With his start at first base against Baltimore, Albert Pujols played in the 2,987th game, passing Barry Bonds for 10th place. Pujols went 0-for-1 with walk and remains three hits shy from tying Eddie Collins for 10th at 3,313 hits. … The Cardinals have homered in eight consecutive games. That’s the longest active streak in baseball and tied with Atlanta and Houston for the longest in MLB this season. … Cardinals CF Harrison Bader and C Yadier Molina had the day off. Carlson moved from right to start at center and Andrew Knizner caught. … The Orioles selected the contract of RHP Denyi Reyes from Norfolk. His first appearance will be his major league debut. RHP Travis Lakins Sr. and LHP Paul Fry were optioned to the Triple-A team. … The Cardinals activated INF Edmundo Sosa from the 10-day injured list. In two injury rehab games with Double-A Springfield, Sosa went 3-for-8 with a hit-by-pitch and played shortstop. In 10 games this season with the Cardinals, Sosa is batting .160. … INF Kramer Robertson was optioned to Triple-A Memphis. Robertson, the son of LSU women’s basketball coach Kim Mulkey, appeared in two games after getting called up May 10. … RHP Adam Wainwright, 40, threw a bullpen session Thursday and could start Sunday against San Francisco. He was placed on the COVID-19 IL on May 6, two days after he started at Kansas City. … The Orioles transferred RHP Chris Ellis (shoulder) to the 60-day injured list. Ellis, 29, underwent arthroscopic shoulder surgery in early May and will miss the remainder of the season. … Cardinals RHP Drew Verhagen (right hip) was set to make his second rehab start Thusday night at Double-A Springfield. … Orioles RHP Jordan Lyles (2-5, 4.05) is to start a series opener today at Detroit. Lyles allowed four runs -- two earned -- and seven hits in 7⅓ innings Sunday against Kansas City. … Cardinals RHP Jordan Hicks (1-2, 3.78) is slated to start in today’s series opener against San Francisco. Hicks has not gone longer than 4⅓ innings in six starts this season.