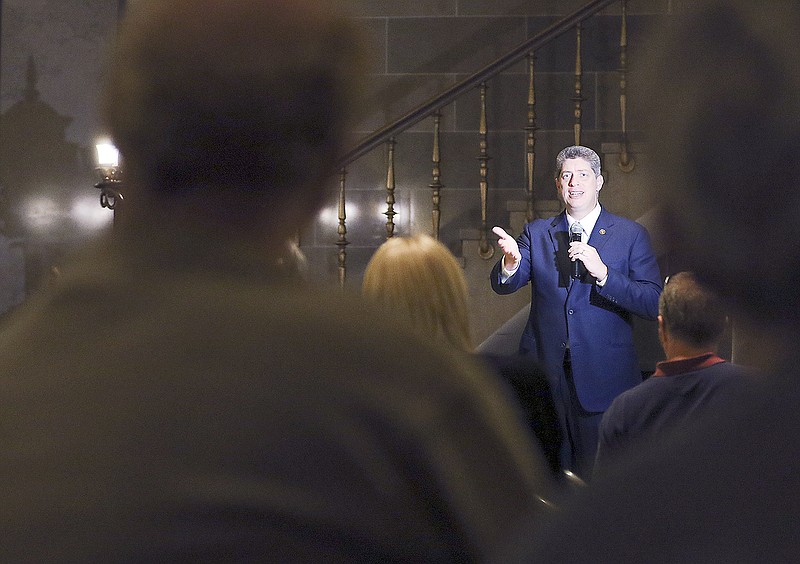 A statewide open enrollment system that would allow students in Missouri to attend a school district outside of one in which they reside is likely dead with just two days left in the legislative session.

However, proponents are optimistic a much more narrowly-tailored version focused exclusively on people who own multiple properties in different school districts is poised to become law.

On Tuesday night, the state Senate passed a wide-ranging education bill that would allow owners of residential and agricultural property to send up to four of their children to any school district where they pay school taxes.

The bill, sponsored by Republican Sen. Cindy O'Laughlin, of Shelbina, now returns to the House for a final vote to send the bill to Gov. Mike Parson's desk.

But Sen. Bill Eigel, R-Weldon Spring, complained Tuesday evening that the bill was only able to succeed because of broken promises.

Amidst two hours of debate Tuesday night, which concluded with the bill passing 29-4, Eigel accused House Majority Leader Dean Plocher of holding another education bill hostage -- which would increase funding for charter schools -- until the Senate passed an amendment on O'Laughlin's bill. He also bemoaned the fact other GOP priorities, like limiting transgender students from participating in school sports, were absent from the bill.

Eigel never specifically mentioned which amendment, but the more narrow open enrollment provision was added to the bill at the request of Plocher, R-Des Peres.

"What's driven this fracture is that the incoming House speaker has a provision on an amendment on this bill that he wants to see passed before he lets charter equity funding go over in the House," Eigel alleged Tuesday, noting Plocher is in line to become speaker of the Missouri House next year.

Asked Monday if he was waiting to bring the charter funding bill up for a final vote in the House until a version of open enrollment passed in the Senate, Plocher said, "that's way down the line" and he was focused on lawmakers fulfilling their obligation to pass redrawn congressional maps.

The House has yet to pass the charter funding bill despite it clearing the Senate nearly three weeks ago.

Meanwhile, a more comprehensive statewide open enrollment system was stripped from O'Laughlin's bill when Senate and House lawmakers met to work out differences in the bill's language.

O'Laughlin said last week that while she supports open enrollment, "there are still people with questions in their mind, particularly in the school community, who are worried that it threatens the viability of their schools."

Other provisions -- which included teaching Black history, having districts report how they used federal stimulus funds and requiring instruction in cursive writing -- were ultimately removed either because they faced opposition in the Senate or because of a lack of support from the governor, O'Laughlin said at last week's conference committee meeting.

With the comprehensive open enrollment program removed from the bill, Rep. Brad Pollitt, R-Sedalia, said it would be tough for the issue to find a path forward before the Legislature adjourns at 6 p.m. Friday.

"I made it perfectly clear that if open enrollment was going to kill that education bill that I was willing to have it taken off for the betterment of the school districts," Pollitt said, pointing to the underlying bill's provisions, which aims to improve student literacy rates.

The House had narrowly sent a standalone open enrollment bill sponsored by Pollitt to the Senate in March, where it has yet to be debated.

With its chances of passage slim, Pollitt vowed to bring the bill back next year.

"I don't know what more I need to do," Pollitt said, "other than for people to understand that I'm pro-public schools."

One piece that remains in the bill would expand the conditions by which a student can attend a school district other than the one in which they live.

Starting in the 2023-24 school year, owners of residential or agricultural property who have paid at least $2,000 in school taxes for the previous four years in a row may send up to four of their children to a district in which the property is located. Families of transferring students would give schools 30 days notice of which district each child would attend.

O'Laughlin described the proposal Tuesday as a "tiny sort of education choice policy."

Plocher, who referred to the provision as "tax equity enrollment," said he began pushing for the proposal after being asked by a farmer why they couldn't send their children to a school district they paid property taxes in. Owners of more than 80 acres of agricultural land are currently permitted to send their children to a school district other than the one they reside, but are subject to certain restrictions, like that 35 percent of the property is located in the district of choice.

Despite concerns raised on the House floor about the specificity of some of the amendment's provisions -- like limiting it to four children and the inclusion of "a named beneficiary of a trust" -- it garnered support from across the aisle.

Rep. Paula Brown, D-Hazelwood, said it will help taxpayers and not hurt public education. Districts may lose students who choose to attend another district, "but it's one or two kids, it's not going to devastate a community," Brown said.

Multi-family properties that exceed four units would be excluded. Pollitt said that was included to ensure someone can't buy a parcel of land and sell small portions of it so people could take advantage.

Rep. Raychel Proudie, D-Ferguson, said in conference committee last week she had concerns the proposal would widen gaps for students in her area.

"I'm not particularly sure who this is for, because for individuals who rent and are of lower-income who don't pay real estate tax, (they) would not be able to take advantage of such a thing. And I can foresee a de-facto segregation situation with that," Proudie said of students leaving their districts.

Costs of the proposal are unknown, as it's not clear how many students would transfer under the provisions, according to a fiscal analysis of the bill.