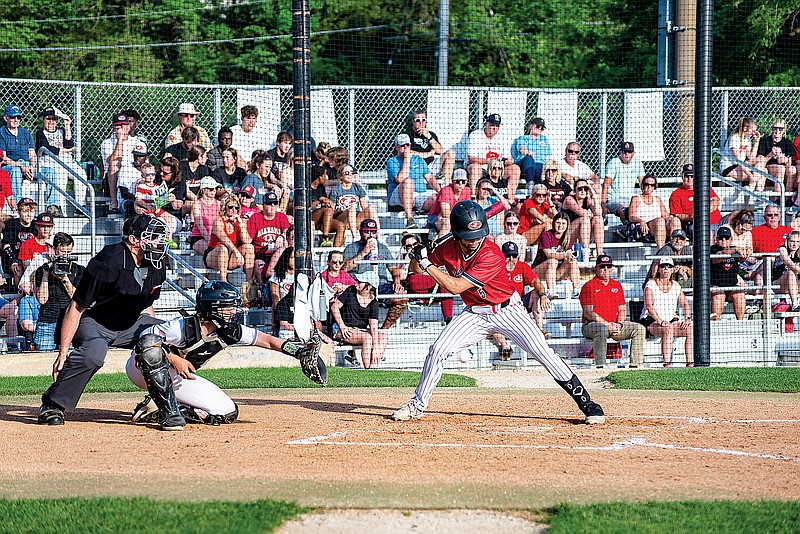 The losing streak is over.

After 14 games and more than a month, the Jefferson City Jays walked away with a win Wednesday, beating the Capital City Cavaliers 9-6 in Central Missouri Activities Conference action at Vivion Field.

“The rivalry game, knowing it’s our last game and then trying to get some momentum before we get into the season where everyone is 0-0,” Jefferson City coach Kyle Lasley said of the Jays’ motivation.

The Jays jumped ahead early.

As the visitors at their home field, letting Capital City celebrate Senior Night at a completed park, Jefferson City was ready from the first batter.

Connor Earleywine worked back from an 0-2 count to walk, then Tripp Maassen attempted to sacrifice bunt, but reached on a throwing error.

A groundout moved them up to second and third, then Eli Miller grounded into another error, with the throw going out of play to allow both runs to score and put Miller on second. Miller then scored when Will Berendzen doubled down the left-field line for the lone hit of the three-run inning.

The Jays added two more runs in the second with the help of another Capital City defensive miscue.

Earleywine singled, then Maassen bunted him to second before Jordan Martin doubled down the left-field line. Martin scored when Berendzen hit into the Cavaliers’ third of five errors.

“Honestly, it was probably one of the worst ones we’ve played in our two years,” Capital City coach Brett Skinner said. “That’s not like us defensively. Usually we’re very strong defensively and that’s what keeps us in games. Today was the opposite.”

The Jays added three more runs in the third. Zac Arnold singled, Hayden Wells walked, then both scored when Earleywine bunted and the throw to first sailed into right field. Earleywine came around to score on a Maassen single up the middle.

While the Jays’ offense got him a lead, Martin was working through the Cavaliers’ lineup.

Martin allowed one baserunner an inning in three scoreless innings to start, then walked two in a scoreless fourth.

The Cavaliers got on the board with an unearned run in the fifth  when Justin Sullens reached on an error and came around to score when Brock Miles rocketed a ball to right center, sliding in to third just ahead of the throw for an RBI triple.

The Jays added a run in the top of the sixth with the help of another error.

Arnold was hit by a pitch then replaced by Cade Beckley on the base path, then Seth Brooks singled when he pinch hit. Earleywine singled to right, but a perfect throw from right fielder Blake Holtmeyer cut Beckley down at the plate.

Maassen reached on an error, allowing Brooks to score, putting the Jays up 9-1.

Martin walked the first batter of the bottom of the sixth, but a double play got him out of the inning quickly.

“He’s thrown well in his two starts,” Lasley said. “He just knows how to play. … He pounds the strike zone, he mixes in his off speed, he’s in control of the game.”

The quick inning couldn’t keep him from reaching his pitch count to start the seventh.

After Grayson Jones singled, Martin was pulled and the Cavaliers got to work.

Noah Nicklas walked, then Sullens singled and Caydin Engelbrecht doubled to the wall in left center for two RBI. Miles followed with a sacrifice fly to cut the Jays’ lead to 9-4, then Ben Turner singled to right for an RBI.

“It’s the mental side,” Skinner said. “They get someone else in there and our guys think they can hit again. … We’re a better offensive team thant we showed. Hopefully it’s a learning moment for them.”

The Jays then went to Max Humphrey, who got a strikeout and a flyout for the save with the tying run at the plate.

“We’ve been in that situation a lot of times this year, going back even to Game 2 of the year,” Lasley said. “It was just one of those deals where it’s happened so many times that one time the baseball gods had to be with us. We’ve battled adversity all year and this time it worked out for us.”

Martin got the win in 6-plus innings of two-run (one earned) ball. He allowed four hits and four walks, while striking out nine.

Carlos Ayala pitched the final 4⅔ innings for the Cavaliers, allowing one unearned run on nine hits and two walks, while striking out six.

Earleywine had three hits, a walk and three runs scored for the Jays, while Maassen had two hits, a run scored and an RBI.

Miles had an RBI triple and a sacrifice fly for Capital City, while Engelbrecht had a two-RBI double.