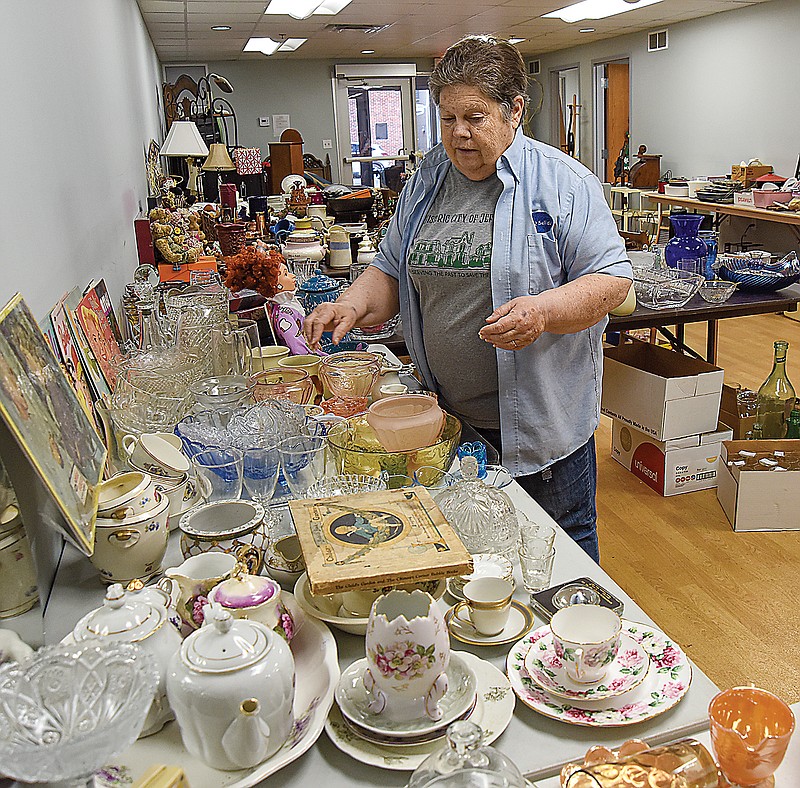 Donna Deetz, president of the Historic City of Jefferson, shows some of the glassware and other items for sale as HCJ prepares to hold a rummage sale in the organization's annex at 601 E. High St. on Saturday, May 14, 2022. Volunteers have been sifting through the items -- sorting, organizing and pricing them this week. Some pieces are considered very collectible, some items are antique while many are everyday items donated to the fundraising cause. (Julie Smith/News Tribune photo)

The goal of the store is to divert historic architectural salvage from the landfill into the hands of people who will reuse it.

"It's the first time we've ever done anything like this, but we know that our members have lots of fun and interesting things, which we love," Green said. "We thought we'd offer some general interest items to the public, too."

Organizers started the architectural salvage store after a tornado struck Jefferson City on May 22, 2019.

HCJ had closed on its building just three months earlier. It was among more than 700 buildings the tornado damaged.

"When the tornado hit, we saw all this waste -- these great architectural features going into big dumpsters on the street, then on to the landfill," Green said. "We had thought about doing architectural salvage at some point in time -- incorporating that into our mission. But there were no plans until the tornado hit."

The building had a lot of space available, so HCJ members decided to convert part of it to architectural salvage.

"We started taking things in really quickly. It was always organized chaos, to some extent," Green said. "That's how we operated until late last year."

That was when Green applied for (and HCJ received) a $10,000 grant from the Mid-Missouri Solid Waste Management District, whose mission is to reduce waste in Mid-Missouri with funding, awareness and coordination. The district serves Cole, Audrain, Boone, Callaway, Cooper, Howard, Moniteau and Osage counties.

The goal when applying for the grant was to divert the architectural salvage from the landfill, she said.

A portion of the money went toward removing broken tile from the architectural salvage area within the building, to make footing safer for the public.

HCJ also purchased a point of sale (POS) system, so it could keep detailed records about materials that come in, including where they came from. The system tracks weight of items that come and go -- so the organization can report (by weight) how much HCJ prevents from going to waste.

"I like numbers. Having this POS system now will allow us to have a solid set of numbers," Green said. "Post-tornado, it was more of an unstructured basis. Having this grant allowed us to finally structure the architectural salvage store and get it going in the direction we originally wanted it to go in."

The grant also paid for hard hats, knee pads and other safety equipment volunteers use when they go into the community to recover architectural elements from buildings. Members (there are 400) hate to see historic buildings come down, she said. Since 1983, HCJ's mission has been to save the historic buildings.

"We also understand and are realistic. Unfortunately, some of these buildings are ... whether they were damaged by the tornado or have seen years of neglect, we're trying to make the best situation possible out of those scenarios," Green said. "We make sure when our volunteers are going out into the community, they are being safe."