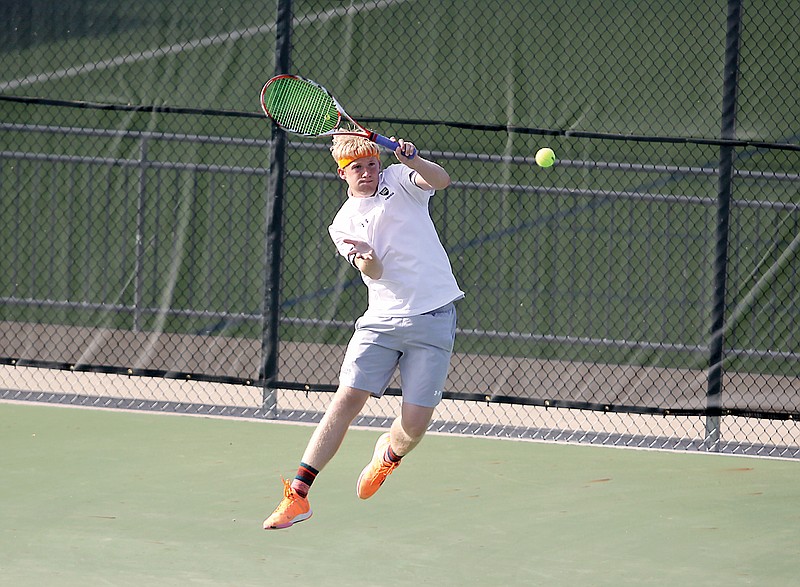 Jacob Zerr of Helias jumps as he hits a forehand during his doubles match against Capital City in the Class 2 District 5 Tournament championship dual Wednesday at the Crusader Athletic Complex. (Greg Jackson/News Tribune)

Helias, the No. 1 seed in the district, improved its season record to 17-2, the most wins in a single season in program history. The Crusaders will play at Barstow (11-2-2), the District 7 champion, either Monday or Tuesday in the Class 2 quarterfinals.

Helias was able to clinch the dual win with three victories in singles play.

Foucheaux topped Dunville 6-0, 6-1 to remain undefeated in singles this season at 26-0, extending the Crusaders’ record for most singles wins in a season.

At the time the match was clinched:

• Helias’ Matthew Liebsch and Schmid were playing in a match tiebreaker. Liebsch won the first set 6-0 and Schmid won the second set 6-4.

• Mueller and Patel were also deciding their matchup in a tiebreaker. Patel won the first set 6-2 and Mueller responded with a 6-4 win in the second set.

Capital City, the No. 3 seed in the district, finishes its season with a 10-10 dual record.