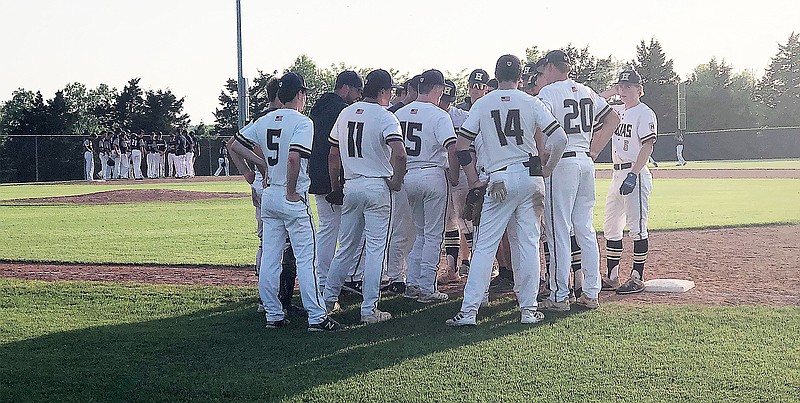 The Helias Crusaders didn’t do a lot of big things Wednesday.

A lot of little ones worked out just fine.

“That was probably our best game by far of getting guys on, getting guys over, getting guys in,” Helias coach Chris Wyrick said after the Crusaders defeated the Battle Spartans 10-2 in Central Missouri Activities Conference action at the American Legion Post 5 Sports Complex.

The Crusaders scored runs in five of their six innings at the plate. Half of those runs came home on productive outs -- three ground balls and two sacrifice flies.

“You don’t necessarily have to get hits to drive guys in,” Wyrick said. “If you’re at third base with less than two outs and you can score without a hit, that’s good baseball.

“If we can manufacture runs like that and still have 10 runs and 11 hits like we did today, I’ll take that every day of the week.”

Helias starter Sam Wyrick allowed a walk and a single to start Battle’s top of the first. But a double play and a grounder to short ended the inning.

In the bottom of the inning, Wyrick hit a one-out triple before David Hofherr’s grounder to short plated courtesy runner Patrick Baker.

Drew Miller followed with a double to right, then Brandon Scheulen tripled to right to score Miller to make it 2-0. Both were balls that had good chances of being caught.

“They make mistakes, you have to take advantage of it,” Chris Wyrick said.

Helias made it 3-0 in the third. Jaden Kolb ripped a 2-1 pitch to right-center for a triple to start the inning before Sam Wyrick hit a sacrifice fly to right.

The Spartans got a run back in the top of the fourth. A wild throw to first after a strikeout sent a Battle runner all the way to third before he scored on a passed ball.

“That was an absolute gift for them,” Chris Wyrick said.

The Crusaders answered with three runs in the bottom of the inning.

Billy Underwood singled to start the inning before Nick Jeffries doubled to put runners at second and third. Luke Cavender drove in Underwood with a grounder to second as Jeffries advanced to third.

Cole Stumpe followed with a first-pitch single to score Jeffires. Pinch-runner Zach Wieberg then stole second and advanced to third on a passed ball before scoring on a hard grounder to third by Kolb to make it 6-0.

Sam Wyrick came out after four innings. He allowed an unearned run, giving up one hit and one walk while striking out six in getting the win.

Wyrick was limited to four innings in preparation for next week’s district tournament.

“We wanted to make sure he’s ready to go,” Chris Wyrick said.

Helias added two runs in the fifth. Hofherr and Miller hit consecutive singles to start the inning. After a strikeout, Underwood doubled to score courtesy runner Baker and Miller to make it 8-1.

Kolb came in to pitch the fifth and sixth innings for Helias. Battle got a run with two outs in the sixth on a single and a double.

“At least they had to hit the ball to get the run,” Wyrick said.

The Crusaders sent seven batters to the plate to score two runs in the bottom of the sixth.

Stumpe led off with a walk before scoring on a double to right by Kolb. One out later, Hofherr reached on an error before Miller walked to load the bases.

Brandon Scheulen then hit a sacrifice fly to center to score Kolb to make it 10-2.

Carson Gettinger pitched the seventh for Helias, allowing a pair of baserunners while striking out two.

Helias continued its recent run of showing some pop at the plate as six of its 11 hits went for extra bases. The Crusaders only left four runners on base.

“We don’t need to be flashy, we can be a good team just doing the right things,” Wyrick said.

Helias (13-8, 3-2) will wrap up the regular season with a conference game today at Sedalia Smith-Cotton.

The Crusaders will start Class 5 District 5 play Monday against the Warrensburg Tigers at the Legion Complex.

Game time is scheduled for 5 p.m.