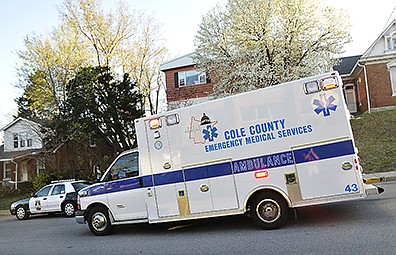 Emergency personnel were able to stabilize the medical condition of a man suffering from smoke inhalation by administering a medication recently deployed in Cole County ambulances.

The Jefferson City Fire Department and Cole County Emergency Medical Services were dispatched to a report of smoke in a structure in the 600 block of Washington Street at 3:49 p.m. Wednesday, according to a press release.

Firefighters entered the apartment building and immediately started searching for the origin of the fire which was located in an apartment with smoke “banked down to knee level.” Firefighters found smoldering material on a stove and quickly extinguished the blaze.

At the same time, fire crews found a man on the couch in the living room of the apartment and began to assist him out. While exiting, the man collapsed and had to be carried out of the building.

Cole County EMS assumed care of the victim and determined the man was in a life-threatening condition with a strong suspicion of cyanide poisoning as part of smoke inhalation. EMS crews administered a CyanoKit (hydroxocobalamin) to the patient along with performing other advanced life support procedures. The patient then was transported to a local hospital in stable condition.

According to emergency officials, this is the first deployment of a CyanoKit by Cole County EMS since the medication was purchased in early January.

Hoy said the medication works by binding to cyanide found in the bloodstream and removing it from the body via the kidneys. This action then allows oxygen to re-attach to the body’s cells.

“Timing is key as the medication is most effective when delivered within 15 minutes of exposure and can dramatically increase the chance of patient survival,” Hoy said.